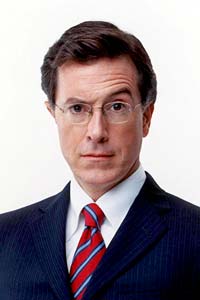 Colbert launched the January 22 edition of his Comedy Central program, "The Colbert Report," with a four-minute installment of the series he calls "Who's Riding My Coattails Now," on which he threatened to burn the honorary doctorate of fine arts that Knox awarded him last year.

"If you give [President] Clinton the same doctorate you gave me, I will be forced to burn [my degree] on the air," Colbert said, contending that the former president had "stolen his thunder."

"Stephen, Stephen, there's nothing to worry about," responded Knox College President Roger Taylor. "You were awarded an honorary doctorate of fine arts, in recognition of your outstanding work as a political satirist. President Clinton will receive an honorary doctorate of laws, for his achievements in public service. It's not the same degree at all. They are two completely different degrees."

"If it would make you feel better, I'd be glad to come on your show and reassure you in person that you are in fine standing among the long and distinguished roster of men and women who hold honorary degrees from Knox," Taylor said.

Knox College is also exploring the possibility of printing a new, fireproof diploma for Dr. Colbert.

Colbert acknowledged that Sen. Obama had spoken at Knox's commencement the year before:

"People are going to say, 'Stephen, the year before you gave the commencement speech at Knox, it was given by Senator Barack Obama. Didn't you steal Obama's thunder?' "

"No. I borrowed Obama's thunder. When I got to Knox College, there was this thunder lying there, and I said 'Hey, whose thunder is this?' and nobody answered, so I used it. As soon as I found out it was Senator Obama's, I had that thunder dry-cleaned and returned," Colbert said on his program.