The Knox College Choir's fourth tour of Spain featured a couple of "firsts" ? the choir's first concert in the Cathedral of Barcelona and their first time on Spanish TV.

The ten-day excursion, March 16-26, included four scheduled concerts, and two first-time opportunities that they didn't hear about until the day they arrived ? a concert in the Cathedral of Barcelona, and live spot on a program on TV3 ? "the Catalan equivalent of 'Good Morning America'," according to choir director Laura Lane, professor of music.

The television program hosted by Josep Cuni reaches more than 13-million people, Lane said, and after the program the choir received e-mail messages from people in Spain who saw the performance on television.

The Barcelona Cathedral concert and television appearance were both arranged by professor emeritus Jorge Prats, a Barcelona native who taught Spanish at Knox from 1962 until retiring in 2000.

A highlight of the tour this year, as it has been on prior tours, is the concert at Castello d'Empuries, said Eric Feltes, one of the students in the 59-member group. "When we sing in their language, Catalan, it connects with them in a way that you can't put into words."

"Connecting in a real, personal and genuine way with people from another country -- that is a great thing for Spanish-American relations," Lane said in a newspaper interview.

Touring also "helps us grow as musicians and as friends. You can hear the passion that grows with each performance," Feltes told the audience at the choir's Home Tour concert on March 28. "But tours don't grow on trees, so our CDs are for sale in the lobby," Feltes said, in remarks to the packed house crowd in Kresge Hall. Choir recordings are also available in the Knox College Bookstore, on-line or by calling 309 341 7344. 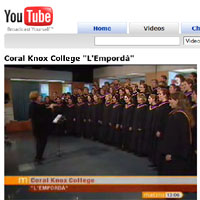 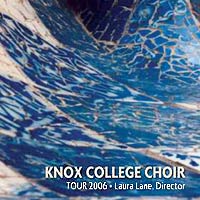 Knox College Bookstore: The Choir's 2006 Tour CD and others available in Music at Knox