Concerts in Barcelona and Catalonia; two home concerts in Galesburg

The Knox College Choir is on a 10-day concert tour of Catalonia in Spain during Knox's spring break in March. The 60-member choir, directed by Laura Lane, professor of music, will perform four concerts -- two in Barcelona, the capital of Catalonia; and two outside of Barcelona.

The choir leaves for Spain on March 16 and returns on March 26.

The choir will perform a wide variety of works, including contemporary American love songs in Spanish and English, settings of Shakespeare by Finnish composer Mantyjarvi, a Cuban rumba, vocal jazz tunes arranged by Darmon Meader and Anders Edenroth, and an American spiritual arranged by Moses Hogan.

The Choir will also sing one selection in Catalan, the native language of Catalonia, an autonomous region on the Mediterranean coast in Northeast Spain.

"Both the locations and audiences in Catalonia are just outstanding," Lane said. "The acoustics are perfect, and the people are unbelievably enthusiastic -- especially when we sing works in Catalan."

In recent years, the choir performed in Spain in 2003 and again in 2006. Knox has operated a study-abroad program for more than 30 years at the University of Barcelona. 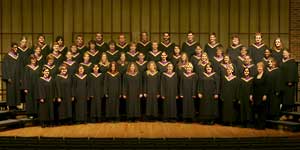 Eric Feltes talks about his experience with the Knox Choir tour of Barcelona.

Eric continues his narrative of traveling to Barcelona and performing with the Knox Choir.