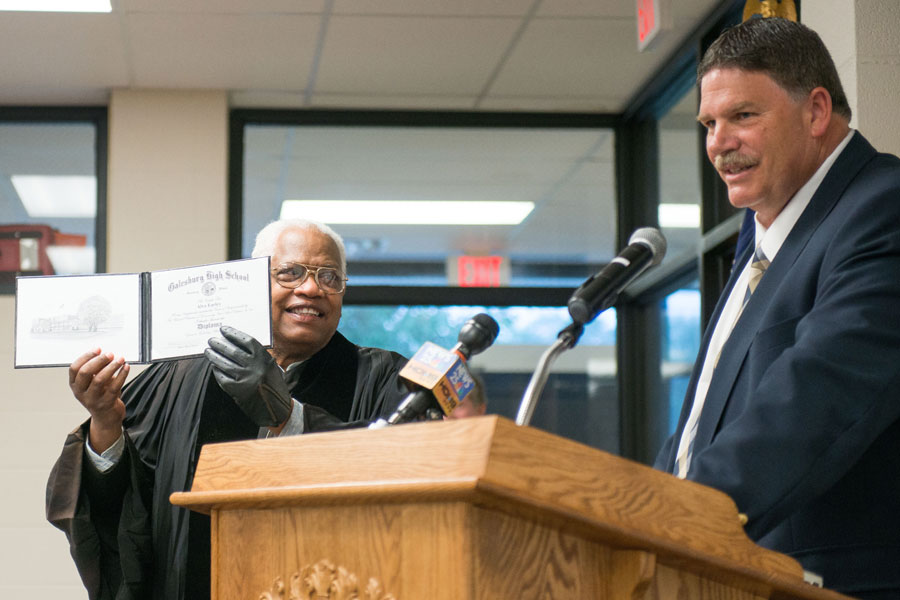 Thanks to Knox College alumni who wanted to fix a long-standing injustice, Alva Earley '63 finally is receiving his high school diploma -- 55 years late.

Until last year, many of Earley's high school classmates, including Owen Muelder '63 and Lowell Peterson '63, assumed that Earley had graduated along with hundreds of other Galesburg High School seniors in 1959. But when Muelder, Peterson, John Sauter '63, and Roger Pearson '63 got together with Earley last fall around the time of Knox's Homecoming, they learned that wasn't the case.

Earley, who is African-American, completed all of the requirements for his Galesburg High School diploma in 1959. Indeed, he was a top student.

A few weeks before the graduation ceremony that year, he attended an NAACP picnic on the north side of Lake Storey Park -- an area that at the time was viewed as off-limits to people who weren't white. Earley says because of that action, he subsequently was excluded from his high school graduation ceremony and denied his diploma. Two colleges where he had been accepted withdrew their offers, he said.

Despite those obstacles, Earley still managed to go to college that fall at Knox. Then-President Sharvy Umbeck had learned through his son Jim, one of Earley's high school classmates, that the young man wasn't being treated fairly.

"At that point, Knox College became my home," Earley said. 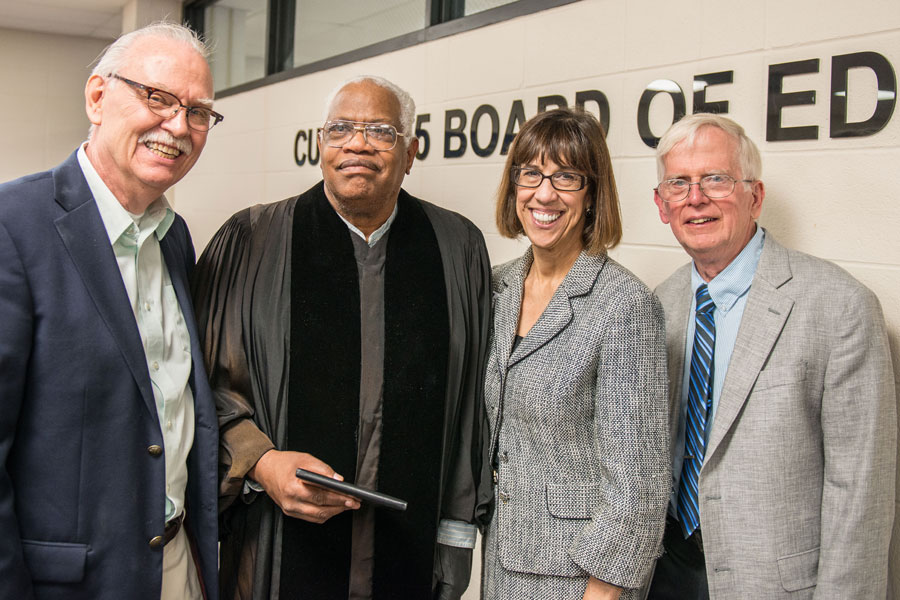 Earley stayed at Knox for two years, leaving because of financial reasons and because of his abusive father. He later graduated from the University of Illinois and the Chicago-Kent College of Law and earned a doctor of divinity from Northwest Episcopal School of Theology. He worked for the State of Illinois for many years until retiring, and he now lives in Colorado.

When Earley told his friends last fall about being denied his high school diploma, they were shocked. Peterson and Muelder decided to act. Their goal was to get Earley his diploma by the time of their 55th high school reunion in August 2014.

"This is a tragedy, an injustice that needed to be rectified," Peterson said.

Muelder contacted Galesburg District 205 officials, who dug up Earley's academic records and confirmed that he had met all the graduation requirements.

On Friday, August 8, Galesburg Superintendent Bart Arthur presented Earley with his long-overdue diploma in a brief ceremony attended by dozens of people, including many of Earley's high school classmates.

Earley proudly flashed the diploma -- and a wide smile -- to the crowd. He said he appreciates all of the support from current school district officials and, especially, his friends.

Muelder said that getting the diploma into Earley's hands is meaningful -- to Earley as an individual and to the larger community.

"For the Galesburg community, it gives people the opportunity to not only be reminded of a time when discrimination and racism were openly tolerated in the past, but it also tells us that significant change has taken place to the point that Galesburg is a much more tolerant city than it was 55 years ago," said Muelder, who is director of the Galesburg Colony Underground Railroad Freedom Station at Knox College.

"The stain of bigotry and racism will always, unfortunately, be part of our nation's history," Muelder added, "but progress on that front has been made, and we are all better off for it."

Earley's story has been the subject of news articles in several media outlets, including the Galesburg Register-Mail, the Chicago Tribune, and NPR.

At that point, Knox College became my home.