Green Oaks Biological Field Station isn’t the only place where successful prairie restoration can be conducted.

In his paper (below), “A Practical Restoration Method for Tall-Grass Prairie,” Peter Schramm, Professor Emeritus of Biology and leader of the prairie restoration at Green Oaks, describes the methods that have been successful at Green Oaks and how they can be used in a small garden plot or applied to a larger scale operation such as a highway planting program.

Introduction
With the disappearance of most of the original tall grass prairie from the Midwestern scene, there has been in recent years an increased interest in the possibility of replanting and restoring a part of this diverse and beautiful grassland community. Attempts to restore prairie on the Knox College Biological Field Station began as early as 1955. In recent years, these efforts have been greatly expanded with the use of machinery to speed the rate of restoration and to improve the quality of the results.

It is important to point out that a restored prairie is a far cry from the original thing, greatly lacking in diversity and proper composition. Some species we do not know how to reestablish. Others are difficult, but possible, and still others are fairly easy to get established. Though not the original, the restored prairie has much to offer in beautifying the landscape, restoring the quality of the soil upon which it is established, offering a rich habitat for bird and animal life, and, finally, giving us a fair glimpse of what our original Midwestern environment was like. Furthermore, a restored prairie will improve with age.

Obtaining Seed
Gathering of seed for Illinois prairie planting may be the most arduous part of a restoration project. Seed of the various species of grass may be hand-picked (or combined) in the early fall, when ripe. Groups of students, Boy Scouts or other interested volunteers may be recruited for this work.

Large operations such as highway planting projects may establish some prairie grass plots specifically to be used as seed sources. These may be combined regularly, when ripe (mid-September to early October, depending on conditions) A well established, dense planting may produce a harvest-able quantity of seed in two to four years after planting.

For the initial plantings, seeds of prairie grasses and forbs (prairie wild-flowers and other non-grass plants) may be picked along railroad rights-of-ways, along back county roads, road banks that are too steep for mowing and around the edges of old country cemeteries. Such areas may never have been plowed and represent remnants of the original prairie. Some such remnants may even be accessible to machine combining of the seed. Permission of the owner should be sought before entering another's property.

A list of recommended grasses and forbs is appended at the end of this paper. Editor’s note: There are many local sources for seeds of species native to the tall-grass prairie. For more information, please contact Professor Stuart Allison at 309-341-7185, or sallison@knox.edu.

Conditioning of Seed
Native seed (both grasses and forbs) gathered from local sources should go through a cold-damp conditioning or “stratification” to insure good germination. This is also recommended for commercial seed.

Mix the seed with about 1/2 its volume of damp vermiculite soil conditioner. Large plastic garbage cans may be used to store this mixture.

Place the mixture in cold storage at around 34 degrees F for two to three months.

The Knox project places seed in the local locker plant about mid-March for an early June planting. Freezing does not hurt the seed. Temperatures above 38 degrees F are to be avoided as mildew may occur.

Ground Preparation
Thoroughly plow area to be restored. Plow, preferably in the fall, so that frost may get at perennial roots; however, plowing may be done at other times of the year if necessary to get project under way.

Weed Control and Reducing Competition
The main problem of prairie restoration is to keep to a minimum the weeds (particularly the annuals) that compete with the newly established prairie plants. Once the prairie plants are well established they will keep out further weed invasion. If the project timetable necessitates, planting may be done late the following spring after plowing, but it is best to leave the field fallow for one year, keeping it weed-free by regular shallow disking and/or harrowing. If possible, keep a wide strip around plowed area mowed and free of weeds that could seed into the area.

Time of Planting
One and a half years later, in late spring-early summer (no earlier than late May, no later than late June) planting may be made. This late planting date allows for harrowing of germinating weeds up through the late spring.

Preparation of Seed Bed
Prepare the seed bed for planting with a final harrowing or shallow disking. (Deep disking will bring up more weed seeds.) DO NOT APPLY FERTILIZER. Fertilizer will only increase the vigor of the competing annual weeds.

Planting
The seeds are planted in damp condition, just as they come from cold storage, mixed with the vermiculite. The seed (both grass and forbs) may then be planted by hand-broadcasting or by a seed drill machine. A very rapid and easy method of hand-broadcasting areas of from one to several acres is for three persons to hand-broadcast from the back of a small tractor-drawn trailer containing the seed.

Rate of application will vary, depending on the amount of seed available, and the size of the area planted. It has been found that the denser rate of application of grass seed will result in a restored prairie sooner than a more thinly scattered planting. A very thinly scattered planting might take from eight to ten years to look like a restored prairie, but would result in a much larger area planted. The denser plantings in small areas are much preferred. A reasonably dense planting should have from one to three dozen grass seeds per square foot.

Rolling in
Immediately after planting, the area should be lightly harrowed (or raked) and thoroughly rolled. The Knox project uses an over-sized metal lawn roller, water-filled and drawn by tractor. Even large plantings can be quickly rolled with such a set-up.

This rolling-in step is very important for it sets the seed into the soil for best germination results. Small plots can be hand tamped if a roller is not available.

Germination
Late June and early July rains are needed for germination and survival of the seedlings. If conditions are very dry, overhead watering of the planting may be necessary at this critical stage, but this is rarely needed in the high rainfall areas of the Midwest. By mid-August, the seedlings, though only a few inches high, have put down a deep root system and can survive the drier conditions of late summer and early fall.

Control of Weed Competition After Planting
Competition and shading by vigorous annual weeds may be reduced by mowing whenever the weeds get above the height of the small prairie seedlings. The Knox project uses a large tractor-drawn rotary mower set to mow above the young prairie seedlings. Such mowing is important during the first growing season, and may be very helpful if continued into the second and possibly a third season. Take care not to mow the prairie plants themselves. A denser planting, well established, usually need not be mowed after the first year.

Use of Fire to Aid Establishment
Many prairie plants are resistant to and apparently stimulated by fire. Fire, if properly applied, will greatly aid in the establishment of newly planted prairie. Studies at the Knox Field Station have concluded that early spring, specifically the last week in March or the first two weeks in April, is the best time to burn prairie plantings.

Some dense plantings may be burned the first spring after planting. Burning is a great aid in eliminating perennial weeds and definitely stimulates the prairie grasses to increased growth. Stands should not be burned in the fall as this eliminates important winter plant cover for wildlife.

Evaluating Results of the Planting
Planting of prairie species may not result in the immediate, spectacular results of certain pasture grass plantings. Most of the prairie plants remain small the first season or two, and may be quite inconspicuous in amongst the annual weed growth. But they are there, nevertheless, and the fact of their establishment will be well apparent by the second or third growing season. From here on, only time and a minimum of management will result in a pleasing and natural landscape of great beauty. In a very few years such a restored prairie becomes completely self-maintaining.

Recommended List of Easily Established Prairie Plants
The following prairie grasses and forbs are known to readily establish using the above described planting methods. This particular list has been compiled rather specifically for such projects as highway plantings where ease and success of establishment is imperative. (The forb list could be greatly expanded in smaller plantings where special hand-weeding methods could be employed). The dominant plants of any grassland community are the grasses, generally few in numbers of kinds (species) but very numerous in numbers of individual plants. Unlike most of the cool-season pasture grasses which turn a drab tan in winter these warm-season species of native prairie grasses lend very special color to the landscape from late-summer through fall, to late winter. The color varies with the species and changes gradually as the season progresses.

Scattered amongst the grasses are many different species of forbs (non-grasses, such as wildflowers). In native and restored prairies, the forbs ever changing panorama of color as each species flowers at its particular time in the growing season.

For restoration, then, the basic mix is one of grasses, various forbs added, depending on the species and the amount of seed available.

These two grasses are highly recommended as a basic mix and can be planted in equal amounts. mixed together or in separate stands, if desired. They do well in medium moist to slightly drier sites.

For added variety this smaller and very colorful grass may be mixed in with the above in varying amounts. This species is particularly well adapted to very dry sites such as west or south-facing road banks. Such banks can be stabilized with this species. This species retains its deep maroon color until quite late in the season.

This species may also be added to the basic mix, in varying amounts, to give additional variety. It does particularly well in the damper sites, but will thrive in other areas as well.

Forbs
The following varieties are particularly quick to become established and flower:

The following varieties are fairly quick to become established and become apparent:

The Following varieties may take longer to establish:

Note: Legumes, for best results, should be inoculated with the appropriate Rhizobium bacteria (available commercially) just before planting.

Adapted from a paper originally presented at “Proceedings of a Symposium on Prairie and Prairie Restoration,Knox College,” at Knox College in 1968. 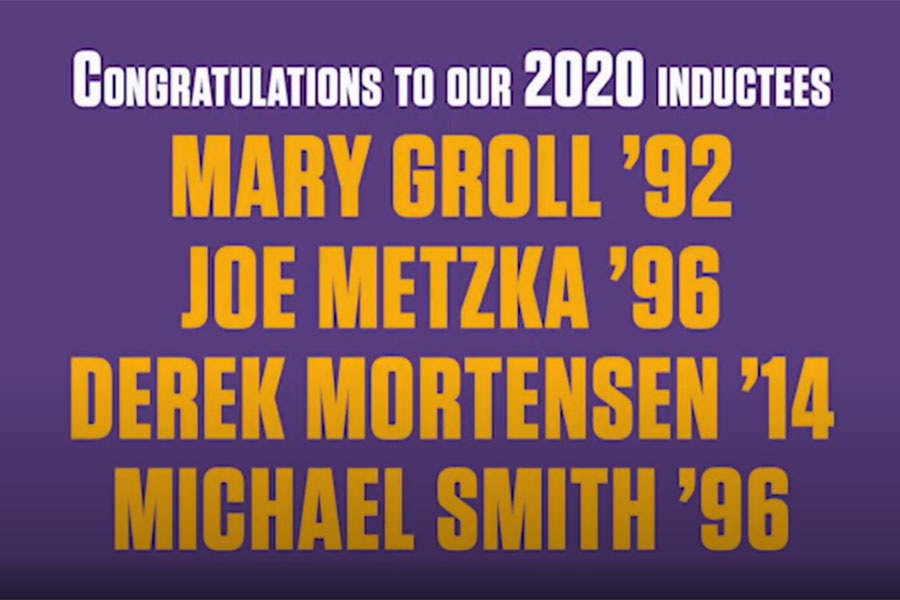 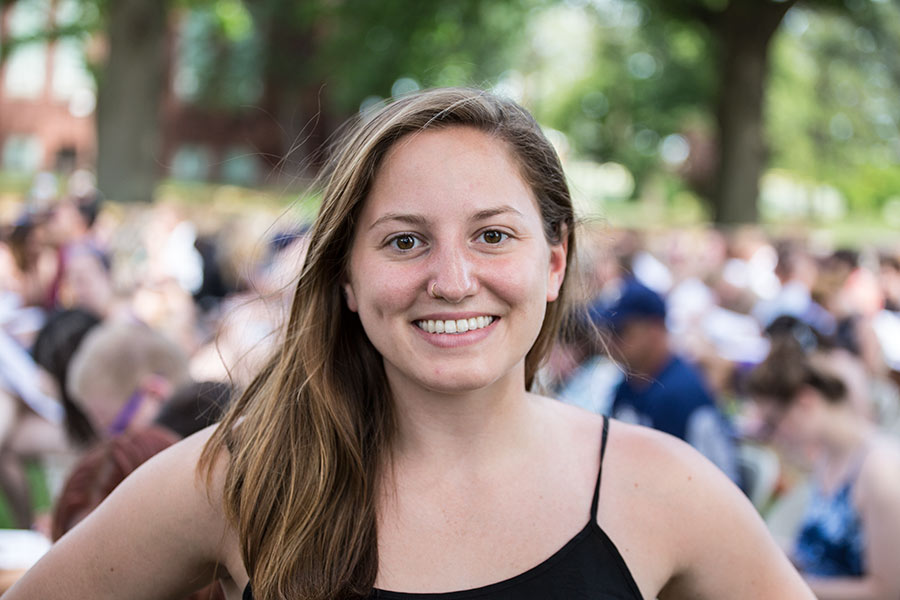 Caitlin is attending veterinary school at the University of Illinois.

Major in Biology, Minor in Chinese