Major in Gender & Women's Studies, Minors in Journalism and Dance

Sadie studied in the Netherlands, Poland, Germany, and the Czech Republic while also pursuing independent research. 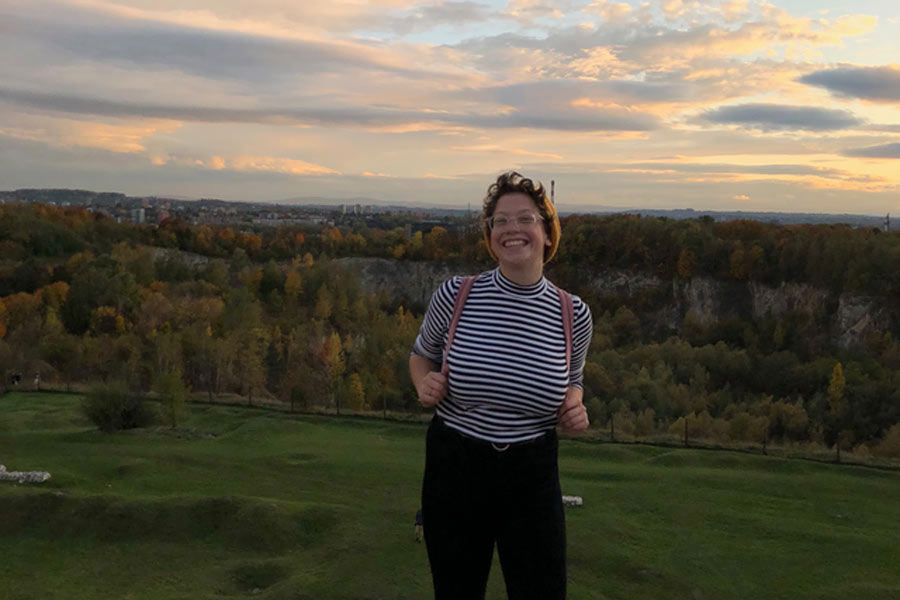 Sadie Cheney '21 was recently awarded a Benjamin A. Gilman International Scholarship to participate in the Comparative Women’s and Gender Studies in Europe (WGSE) program run through Carleton Global Engagement. While abroad in the fall term of 2019, Cheney studied Gender & Women's Studies in the Netherlands, Poland, Germany, and the Czech Republic, as well as completing independent research on the lived experiences of sex workers in the region. Cheney’s research abroad has been deeply impactful to their academic and personal life.

We go to the Netherlands, Germany, Poland and the Czech Republic, and we study Gender & Women’s Studies as a group. My program was 20 people and one professor, and we travel together, we live together, and we take classes together. Throughout the whole experience, we’re not only learning about theory and all of those methodologies and stuff like that: we’re also going to organizations and learning about what they’re doing in regards to Gender & Women’s Studies, and that can take place anywhere from abortion clinics to sex work advocacy centers and homeless shelters. We went to a couple organizations in each country. And then we also had guest lectures, really big names in the Gender & Women’s Studies realm, like Chimamanda Ngozi Adichie—she wrote the book We Should All Be Feminists.

We all took three classes: Situated Feminisms, Queer/Trans Theory, and then a feminist methodologies course. And then we also all had to complete an independent field research project, which could be literally anything in regards to Gender & Women's Studies, so I chose the topic of talking about the lived experiences of queer sex workers.

How did you decide on and conduct your final research project for the program?

I interviewed sex workers and then I also interviewed people who work at sex worker organizations, which usually means that they were former sex workers, and that’s what I hoped for. From there, we were all required to write a 20-page research paper. I want to be a journalist, so I wanted to come at this as feature writing, in an interview kind of way.

I wanted to give a voice to people that don’t really get a voice within publications and within discourse. And sex work, usually when it’s talked about specifically within academic settings, it’s talked about by people who aren't a part of the industry and who don't really understand the whole complexity of the argument. I wanted to talk about exactly how sex workers feel and what they’re living and what they’re going through, and then put that into academia, rather than altering their voice.

It was kind of like a jumping-off point for me, and it helped me understand research especially within the Gender & Women’s Studies world, because it’s different than other types of research—it focuses more on the lived experience.

Is there a professor or class that really influenced you diving into your studies?

Since then, I've been in Cate Denial’s History of Reproduction Rights in the United States class, and she’s just everything. I love Cate Denial so much. Every time I’m in her class, she comes at each point with a really thoughtful and articulate, conscious—something. That final thing that I don’t know. She just really comes in thinking about everyone who’s in the room and everyone who’s not in the room, and I really admire that.

How did you find out about the Gilman Scholarship?

[Director of the Stellyes Center for Global Studies] Bren Tooley just comes in with all of the information; she really gives you everything you need to know and how to exactly study abroad in any kind of situation. She knew I was a Pell Grant recipient, and she was like, “You've got to apply for this.” She helped me when I really didn’t think that I would be able to receive such a prestigious award.

It’s a really big deal to get something like this, and I just feel so honored that I got to come here and come be with all of these different writing mentors to work with on my application essay and help me get my voice into it. Knox has a history of getting so many Gilman grants, and I didn’t think that I had what it took, but Bren really helped me out, and so did [Associate Director of TRIO] Laura Bush.

What would you tell students thinking about studying abroad?

If studying abroad is a thing that you’re looking to do, Knox really, really, really cares about it. And Bren Tooley really, really cares about each and every one of her prospective students, and she wants everyone to go abroad. She’s so ambitious and wonderful and just is like, “Oh, you want to go here? We could go here and here and here.” And she just gives you everything, and it’s kind of overwhelming, but it’s exciting. It’s like, wow, you just really believe in me, even if I don’t believe that this is an opportunity that I deserve.