As a McNair Scholar, Katana studies the literary voices of underrepresented groups. 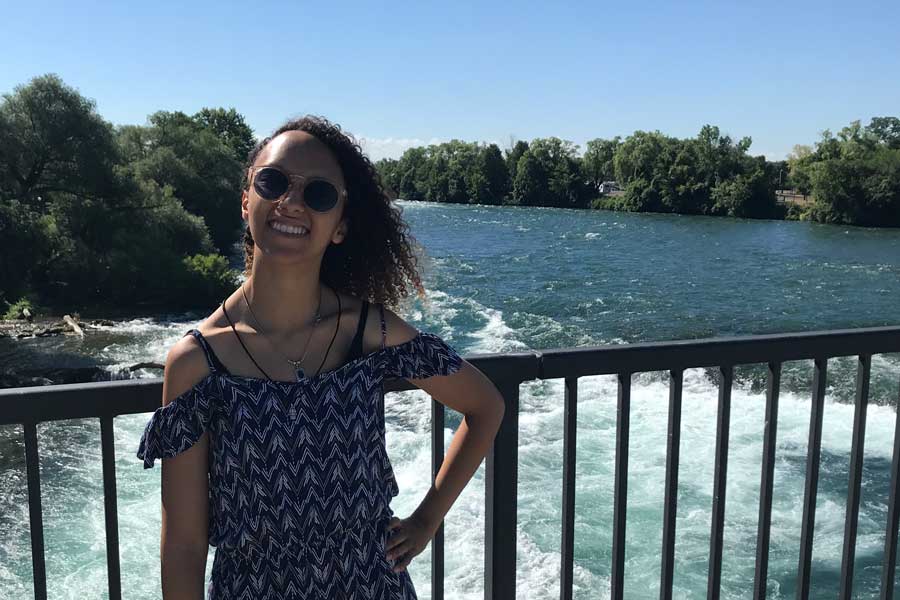 Would you summarize your research?

My research is exploring the ways in which writers and some artists have reacted to political issues throughout history. I'm mostly focusing on American writers and narrative formats (especially fiction writing), but I'm trying to pull from a variety of genres and formats. The goal of my project is to locate ways in which writers have historically and could possibly respond to today's political issues. For this, I'm especially interested in the points of view of queer people and people of color.

What inspired you to pursue this project?

I think the LGBTQ Literature course I took in the spring of my freshman year was a strong influence on this project, and on my writing in general. Learning how queer people have always been using literature as a tool for resistance and community formation was really beautiful to me, and that tradition is something I've always wanted to be a part of. Being an editor for Catch and Cellar Door has also been a great source of inspiration for me; seeing the work that everyone else is doing on campus really makes writing more fun, and pushes me to do more.

What is the most exciting thing you have learned from your research?

It's really exciting for me to learn that there are so many ways to approach literature. I think that it's really a world of unlimited possibility. There's nothing that you can't do. And it's inspiring to me that artists have always had a reaction to cruelty in the world. Writers and artists are often the ones who navigate and expose the pain of the world, which I think is really important.

How did you choose Knox?

I think the people at Knox were really a deciding factor for me. I definitely visited some schools that were more "flashy" or "prestigious" than Knox may be in some people's minds, but at Knox, everyone I met was really interested in me as a person, and I was interested in them, too. I had great conversations with people just during my short visit to campus, and with alumni in Colorado. Knox really draws in a lot of friendly, passionate people, and that struck me as something special that I could be a part of.

What about who you are now would surprise your high school friends?

I think that I'm more confident in myself since I've come to Knox, and that confidence leads me to care about others, and try to have a positive impact in the world.

Katana Smith '20 is one of the Knox McNair Scholars. Among her involvement on campus, Smith serves as an editor on the staff of both Catch and Cellar Door and as a writing tutor in the Center for Teaching and Learning.

Mikko’s interest in ecology and birding started at Knox, and followed him into his career as an outreach biologist.