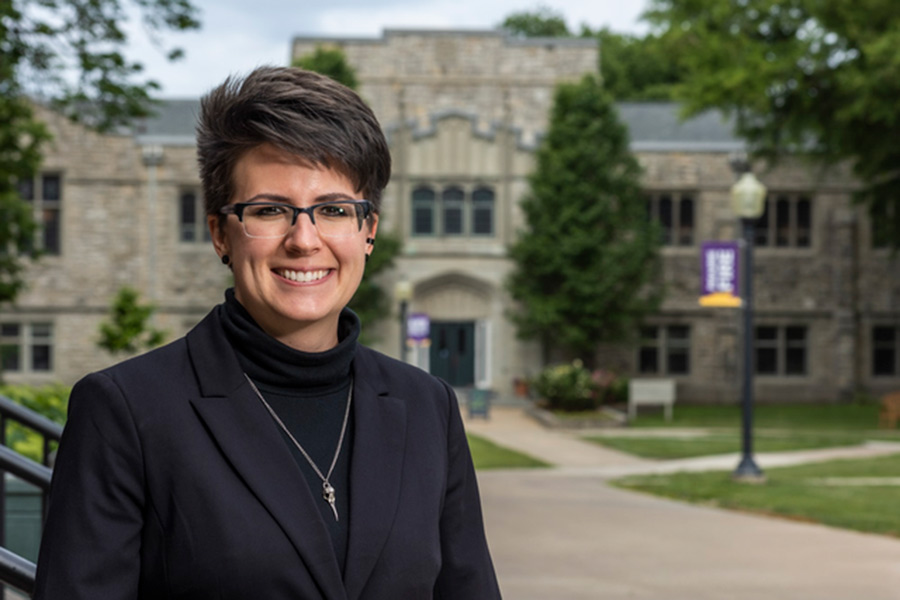 Dusty Sanor recently joined Knox’s Office of Advancement as assistant director of annual giving. In this role, she will be working with young alumni and current students on College engagement and philanthropic opportunities.

A native of Chebanse, Illinois, Sanor is no stranger to many in the Galesburg area. She was the farm manager at Spurgeon Veggies, a farm store and community-supported agriculture (CSA) service based outside of Galesburg. In that role, Sanor was a regular at the Galesburg and Quad Cities farmers’ markets and has employed numerous Knox students.

“I’m looking forward to working more closely with Knox students,” Sanor said. “I have worked with many over the years at Spurgeon Farms, and have been blown away by how smart and driven they are.”

Sanor is a bagpipe player, and that talent led her to pursue her bachelor’s degree in biology with a minor in chemistry at Monmouth College.

“We’re not even Scottish,” Sanor said. “My grandfather told me he wanted me to play ‘Amazing Grace’ on the bagpipes at his funeral, so I learned to play the bagpipes. Fortunately, that performance has not happened yet!”

As a 2010 graduate, Sanor understands the most effective ways to communicate with and engage young alumni. “I think younger people are looking for less formal communication and they want to make a difference in specific big things. Learning about and understanding the cultures of generations younger than me is fascinating, particularly in the area of philanthropy—what drives volunteer work and donations? What can I learn from them to make sure Knox remains an important part of their lives?”

Sanor is excited to harness the energy of the students with whom she’ll be working. “There seems to be plenty of thinking outside the box going on,” Sanor said. “Knox students seem to really want to make impacts in the world and society, and it’s hugely motivating for me to see that sort of idealism get teased out and applied to real-world situations. I’m excited to be part of such a forward-thinking organization.”

Worry not that loyalty to the Fighting Scots will precede any fondness for the Prairie Fire. “I’m more of the academic type,” Sanor explained. “I really wasn’t into athletics; I think that’s where the rivalry mainly exists.

“Knox and Monmouth are similar in many ways, and we have similar goals of creating an educated citizenry, so I feel like I fit in well at Knox. The critical thinking skills I learned through my liberal arts education are really beneficial skills.

“I love this community, it has become my home. I know everybody here, and I really like the people. I wanted to continue to support this community in some way and working at Knox is one high impact way to do that.”