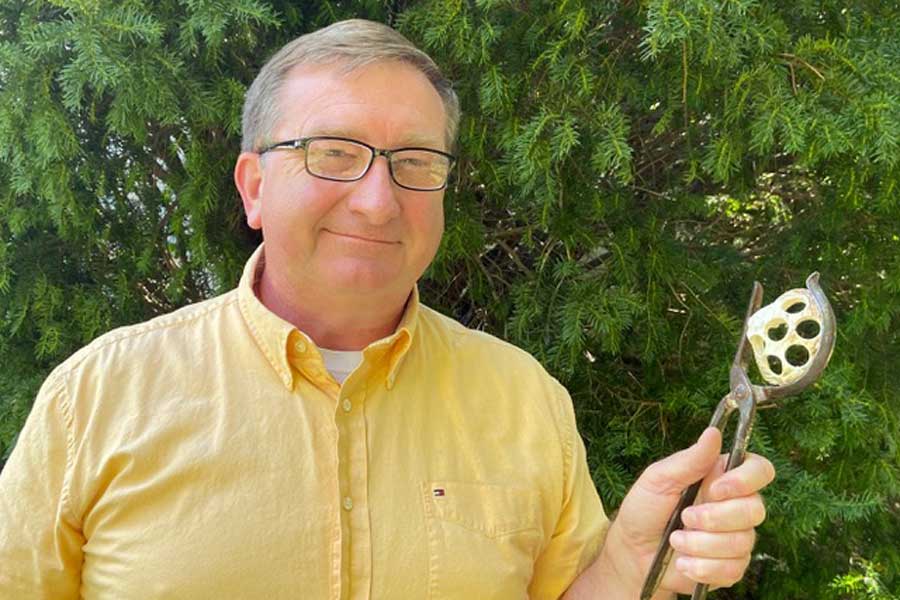 I have fully embraced the spirit of a liberal arts education, which is to say, I never could decide what I wanted to be when I grew up. That is a joke. My career path has been very rewarding and interesting but also meandering and eclectic.

After graduating from Knox with a degree in biology, I worked for several years on my father-in-law’s farm in western Illinois. I still work on the farm when I have the chance, helping with the planting in the spring and driving the combine during the harvest.

While I was working there, I began taking flying lessons with the ambition to acquire my private pilot’s license. I found that I really loved flying and ultimately completed my commercial, instrument, and instructor ratings. I was a certified flight instructor at FlightSafety Academy in Vero Beach, Florida, for four years where I taught about 50 students how to fly and managed FlightSafety’s training program with Air China.

I was hired by TransStates Airlines, a small regional carrier based in St. Louis, Missouri, in 1998. I worked there for 22 years, initially as a first officer on the ATR 72 and later a captain on the Embraer 145 regional jet. We flew all over the continental U.S. and Canada as a codeshare for United Airlines. In April 2020, TransStates ceased operations after 35 years, making it the first airline casualty of the COVID-19 pandemic.

You recently started working at the National Pearl Button Museum in Iowa. Can you tell us a little about that?

I am the new director of the museum, and I absolutely love it. The National Pearl Button Museum tells the story of the button industry in Muscatine, Iowa, which dominated the local economy for nearly 50 years. As the director of a small museum, I get to do something different every day. On Monday, I might be meeting with the mayor of Muscatine and the president of the Chamber of Commerce. On Tuesday, I’m writing fundraising letters and working with my staff on a Facebook marketing effort. On Wednesday, I’m helping [a colleague] develop a new exhibit. On Thursday, I might be mopping floors and cleaning toilets. Every week seems to have new challenges and new opportunities.

How did this opportunity come about?

I had several very interesting prospects and close calls over the summer. It was then that I found a notice on Indeed that a small museum in Muscatine, a museum right across the river from me, was looking for a new director. I love history and I love museums. In my travels around the U.S., I have visited dozens of local museums, from the Erie Canal Museum in Syracuse, New York, to the Virginia Museum of Transportation in Roanoke, Virginia, to the Buffalo Bill Museum in Cody, Wyoming. I could spend all day in these museums, and I even had a little fantasy about working in one. I was excited at the prospect.

The challenge was, of course, convincing the museum’s board of directors that it made any kind of sense to hire a guy to run their museum who had spent the last 25 years flying airplanes. I wrote the most enthusiastic cover letter I could, sharing my love of history and trying to explain my “working in a museum” fantasy in a form which made sense. It worked!

So, buttons. What sparked your interest?

You know, I get that question a lot. Buttons are definitely commonplace items. We take them for granted because we use them every day. But in Muscatine, buttons were huge! In 1905, the industry in Muscatine produced 1.5 billion buttons. Numbers that big are fairly abstract, but if that many buttons were stacked, the pile would be almost 1,500 miles high. And this was from a town with 14,000 people. Every family in and around Muscatine, and even up and down the Mississippi and Ohio rivers for hundreds of miles, was engaged in this business. They either caught clams, hauled them, drilled them, or worked in the button factories.

And this was a national growth story, too. This was one of the first American natural-resource-based industries which came up against the inelastic fact that you cannot produce an infinite product by mining a finite resource. There were only so many clams in the Mississippi River. They moved outward to the Ohio and the Missouri and the Wabash and the Illinois. But those populations were not inexhaustible either. As so often happens, efforts were made, too late, to stabilize mussel populations and repopulate rivers. These lessons, it seems, are always learned the hard way. Like the passenger pigeon and the bison, it was unimaginable to early pioneers that clams could ever be endangered or extinct; there were so many.

So this, to me, is a fascinating history and a cautionary tale which is equally applicable to today’s resource-based economies.

What other impact has your education had on your after-Knox life?

The beauty of a place like Knox and the wonderful part of a liberal arts education is that you can study everything. I was a biology major and I loved my classes with Dr. Eugene Perry, but I also took Constitutional Law with Dr. Lane Sunderland, and I took Shakespeare with Professor William Brady, and I studied astronomy with Dr. John Boyd and fiction writing with Professor Robert Hellenga. The world is a wonderful and interesting place and Knox is a smorgasbord for those who are fascinated by it all.

Can you describe a favorite memory or two from your time at Knox?

I have many great memories of Knox. Many revolve around Professor Billy Geer, who was my advisor and mentor and in whose lab I worked for three years. He was a remarkable man and was a truly devoted teacher. He believed that college students like us could do “real” research and that the best way for us to learn was by doing. Those of us who worked in the fruit fly lab participated in every aspect of his research. We helped design experiments, we carried out the procedures, and we helped him analyze the data. And he was unfailingly generous with the credit. There are still peer-reviewed articles out there in real scientific journals, written by Dr. Billy Geer, but crediting me and my fellow sophomores, juniors, and seniors.

To some extent, it represents my youth. I am nostalgic for my days at Knox when the whole world was opening up to me and I had the freedom and opportunity to study anything and everything and to take part in serious discussions about important things with wonderful professors and with my fellow students. My only advice to the students of today is to take the time to stop and appreciate the opportunity you have. My favorite quote is one that Kurt Vonnegut used to share and it becomes more poignant to me all the time. He said, “And I urge you to please notice when you are happy, and exclaim or murmur or think at some point, 'If this isn't nice, I don't know what is.'” When I think about my time at Knox or visit the campus, I am always reminded of Vonnegut’s words. It was a time in my life I will always treasure.