Gnassounou wants to be a powerful voice for Black medical professionals and the Black community. 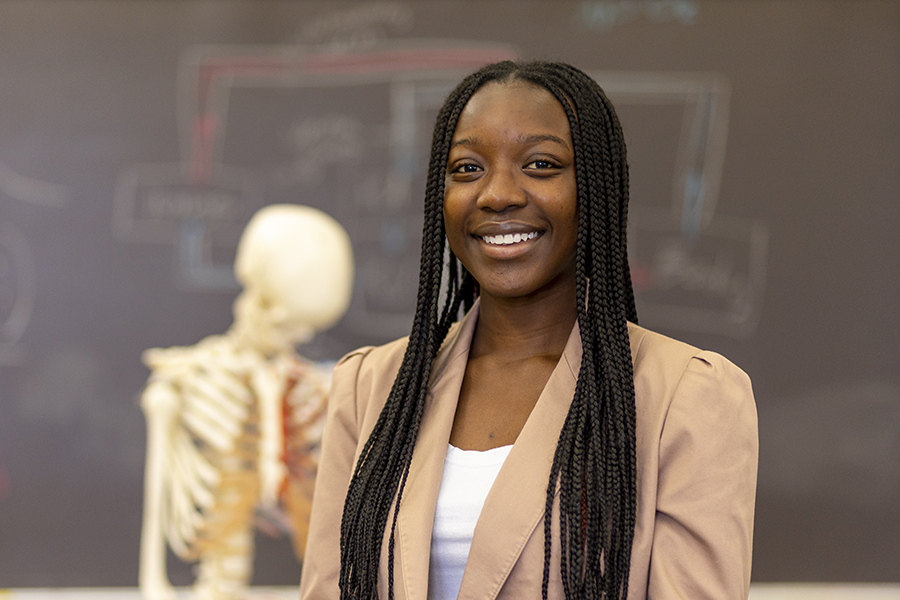 Maella Gnassounou ’24 has always wanted to be a nurse. She applied to Knox, interested in the College’s cooperative program with Rush University College of Nursing. She says it was an opportunity too good to pass up. “It was a huge factor for me.” Now, in her third year working with Lisa Harris, her pre-health advisor and director of the Vovis Center for Research and Advanced Study, the pipeline to a nursing career is clear.

Gnassounou doesn’t want to take just any medical job that comes her way after graduation. She wants to be a powerful voice for Black medical professionals and the Black community.

“Pain can be perceived differently based on who you are and what you look like,” Maella said. “If a Black child goes to a hospital, they should be able to be helped by a Black person who can help understand.”

Throughout her life, Gnassounou spent time visiting medical specialists for a health issue. She says that in her Chicago neighborhood, there was only one Black doctor that specialized in her needed care that she could see. She wants to forge a medical career that can help build up that number. “People need medical help, and not everyone is able to trust the medical field. I want to be a face that people can trust and show that I understand.”

Knox advisors helped Gnassounou sign-up for and complete the SHPEP (Summer Health Professions Education Program), a free summer program for students to explore their interests in medicine, dentistry, nursing, and more. Gnassounou says SHPEP helped her see different avenues she could pursue in the field, helping her feel less stuck in a particular direction. She was also recently accepted into the Area Health Education Centers (AHEC) Scholars, a two-year program that recruits, trains, and supports a diverse group of students who are committed to improving health care in rural and underserved communities in Illinois.

Now, Gnassounou's attention will turn to her prep work to apply for the Rush program. The Generalist Entry Master’s (GEM) Clinical Nurse Leader program is offered through Knox in partnership with Rush as a pipeline toward a career in nursing, which is followed by a Clinical Nursing Leader (CNL) certification. She says about half of her prerequisite courses are completed and she’s confident she will be chosen. Knox nominates two students in July and two students in January for the Rush program each year.

Though the medical field is ultimately where Gnassounou hopes to land, it’s not the only interest she is pursuing at Knox. During her first term, she took a Race and Ethnic Relations class with Wendel Hunigan, lecturer in anthropology and sociology. This was followed by Black Image in American Film with Konrad Hamilton, Burkhardt Distinguished Associate Professor of History, Chair of American Studies, and a Black Lives Matter class with Yannick Marshall, assistant professor of Africana studies.

Finding her love for Black history opened Gnassounou to a new path. Instead of majoring in health studies or biology, two common majors for pre-nursing, she instead chose to major in Africana studies. By learning people’s differences and the history of Black Americans, Gnassounou sees herself becoming a fuller, more enriched medical professional. She hopes to “work towards mending the disconnect between healthcare and Black people.“

“If I am blessed enough to be a nurse, I don’t want to be a nurse who just helps out. I am here to understand my people,” Gnassounou said. “My major will make me a more enriched medical professional because I will be able to consider the patient's identity and give them better care, especially for black patients and patients of color.”