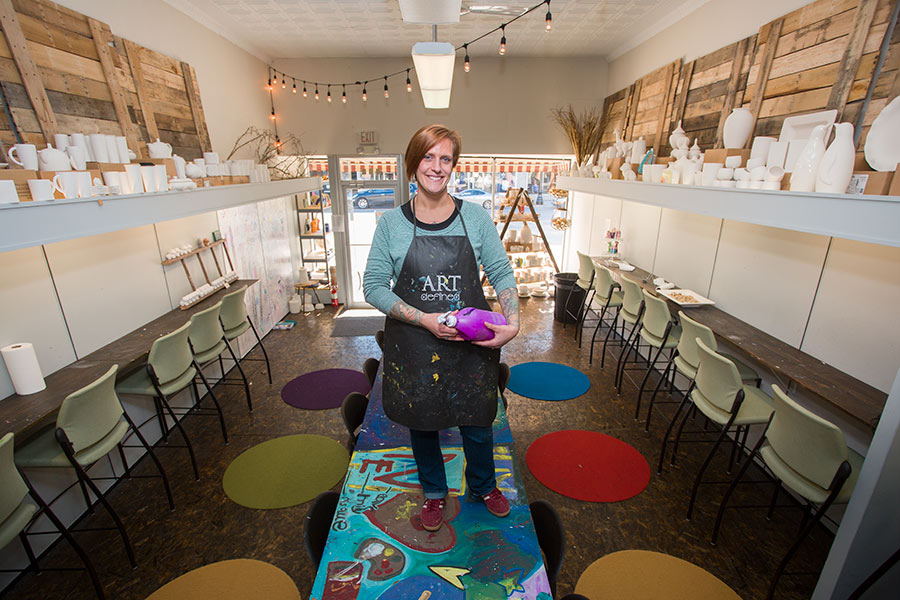 It can be intimidating for non-artists to pick up paintbrushes and get in touch with their creative sides, but Kristal Frisque '02 is making that easier for the people of Galesburg with Art Defined. The business hosts painting parties where participants are provided with the materials and the instruction to make works of their own on canvas or pottery. It is also home to Galesburg's first paint-your-pottery studio. "Art can be such an elitist endeavor," Frisque says. "I wanted to tone that down."

Launched in 2013, Art Defined initially hosted events in other facilities, but moved into its own colorful and welcoming Main Street storefront in August 2016. Its impact has been widespread. So far, more than 2,500 people have participated in the events, including both private parties and fundraisers, with painters coming from Macomb to the Quad Cities, in addition to the local area. Frisque is the sole owner of the business and employs two others.

In 2014-2015, Art Defined donated $25,000 to local nonprofit organizations through painting events created as fundraisers, and Frisque plans to start an arts-based camp for kids in 2017. That project is a continuation of her mission to fuel confidence in participants and foster a sense that art is for everyone. "It's great to see people break out of their comfort zones and realize they can do this," Frisque says.

Frisque was two years into her college degree when she moved to Galesburg from Green Bay, Wisconsin, for her husband's job with the railroad in 1998. She finished her degree in studio art at Knox, concentrating in ceramics. She considers herself self-taught in the ins-and-outs of running a business, but credits the thick skin and analytical ability honed in her undergraduate art critiques as steeling her for challenges of running an arts business in a smaller city.