A business owner and working artist, Anderson strives to promote the work of local artists at her Seminary Street store. 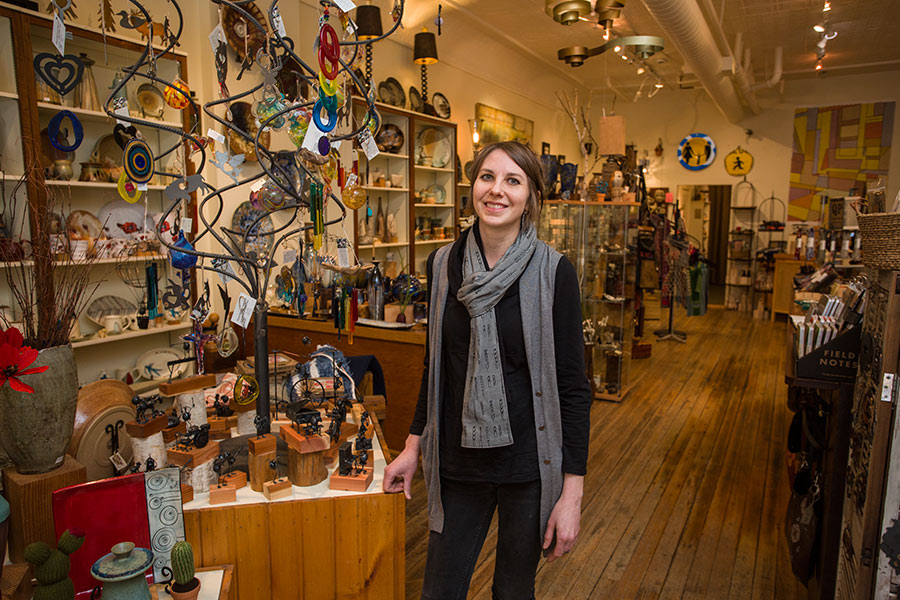 Hilary Anderson '00 was looking for an art studio, not a retail space. But she got both when she found a spacious and reasonably priced storefront in Galesburg after moving back to the area to be closer to family. Rivet Boutique opened in late summer 2015 on North Seminary Street and featured Anderson's own hand-crafted jewelry, as well as dozens of other artists' work and high-quality vintage items.

Just over a year later and a block south, Anderson took over the former Dovetail Arts on South Seminary, merging the inventories and concepts of the two businesses to create Dovetail Rivet & Stitch. The change offered more foot traffic, an established clientele, and nicer environs to reflect the quality of the work. More than 200 artists are now represented—including jewelry, ceramics, sculpture, wall art, and more—and Anderson plans to add more. As a business owner and a working artist, the inventory not only reflects her own aesthetics but also the tastes of her customers, and she sees educating clientele about the artists and their work as an essential part of the business.

Anderson's connections to Galesburg run deeper than studying studio art at Knox. A native of neighboring rural Henry County, she grew up viewing Galesburg as the social and retail center of the region—a place where people from neighboring towns came to shop, eat, and socialize. Now firmly ensconced in Galesburg professionally, she sees small businesses in town as essential to the town's character and economics. "Downtown has a lot of potential," Anderson says, noting an influx of small, independent businesses opening in recent years. "I would love to see it continue to get even better."

She sees potential for enhanced connections between her business and her alma mater as well, from utilizing art and business students as interns to consigning more work from Knox College alumni.