'His poetry reminded me of music,' says one student

The Knox College community gave a rousing welcome to writer, artist, and Emmy Award-winner Kwame Dawes when he spent time on campus for the 2011 Honnold Lecture.

Students packed into Henry M. Seymour Library on March 25 to hear Dawes read poetry, and Kresge Recital Hall in the Ford Center for the Fine Arts was at near-capacity for his lecture a day earlier.

Although Dawes' achievements as a poet, scholar, actor, playwright, and broadcaster might seem imposing, his appearances clearly showed how down to earth he is.

When he came up to the podium for the poetry reading, Dawes noticed the large audience in the Muelder Room. "It's Friday afternoon; don't you have anything else to do?" he asked with a smile. Then, in his low honeyed voice, he sang a few bars, and the hour of poetry had begun.

Born in Ghana, Dawes was influenced by the music and rhythm of Jamaica, where he grew up, and it shows in the almost lyrical nature of his poetry.

"His poetry reminded me of music," said Knox junior Martin Yeager. Sometimes, Yeager said, he stopped listening for the poem's meaning and just listened to the poem, "not registering the words, just the sound of his voice."

Dakota Scott, also a junior at Knox, first became interested in Dawes' poetry when she heard his work read aloud. "I heard Kwame's poems recorded, and his voice was absolutely captivating." Scott was overjoyed when she found out that Dawes would be coming to Knox.

"You couldn't have kept me away," she said.

Dawes is Distinguished Poet in Residence at the University of South Carolina, where he is also the Louis Frye Scudder Professor of Liberal Arts, and the founder and executive Director of the South Carolina Poetry Initiative. Knox College awarded an honorary doctorate to him in June 2010.

During his Honnold Lecture in Kresge Hall, Dawes presented what he described as a meditation "on the meaning of art and the meaning of being a human being in a world that is constantly in flux." The lecture was titled "Chameleon of Suffering: Art, Empathy and Citizenship." 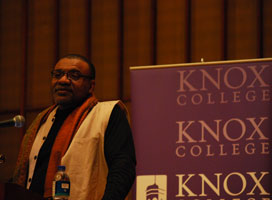 He described the origin of some of his poems, including the ones in the collection "Wisteria: Twilight Songs from the Swamp Country." They were inspired by Dawes' interviews with older black women who endured the Jim Crow racial segregation laws. Their stories haunted him, he said, and the poems grew from his "desire to work through that haunting."

Poems ‘are layers upon layers'

Dawes' poetry reading in Seymour Library, organized by the Caxton Club at Knox, concluded with a question-and-answer session. When one student asked how long it takes Dawes to write a poem, he jokingly said it took 10 minutes.

"I'm a genius!" Dawes declared with a smile. Then he answered the question honestly.

"The first draft is trying to figure out what a poem is about. It can be days or years before (the poem is) done." He said that he is always working on many poems at once. It takes him numerous drafts before the poem is ready for publication.

Poems are never really done, Dawes said. "The relationship with a poem is ... a lifetime of understanding," he explained. "There are layers upon layers."

He encouraged students to reread poems. "The poem won't be the same when you're 16 and 60, so come back to it later in life."

Knox students clearly connected with Dawes. When the poem he read was sad, they sat in somber silence, and when Dawes told a joke, the room filled with laughter. The positive reaction seemed to make the easygoing Dawes even more comfortable.

"It's awesome that Knox has made him feel so welcome," said Dakota Scott. "It says something about the Knox student body."

About the Honnold Fund

The Dawes events at Knox were sponsored by the Honnold Fund, John & Elaine Fellowes Fund, Caxton Club, and Office of the President.

The lecture was permanently endowed in 1936 by the Honnold Fund, established by William Lincoln Honnold. He attended Knox College's prep school, the Knox Academy, in 1886-87 and later earned a degree in engineering from the Michigan College of Mines.

The purpose of the Honnold Lecture is to bring leaders in various fields to Knox College for public talks, informal discussions with students and faculty, and classes relating to their areas of expertise. Honnold Lecturers have included U.S. Supreme Court Justice William O. Douglas, anthropologist Margaret Mead, and author Susan Sontag.