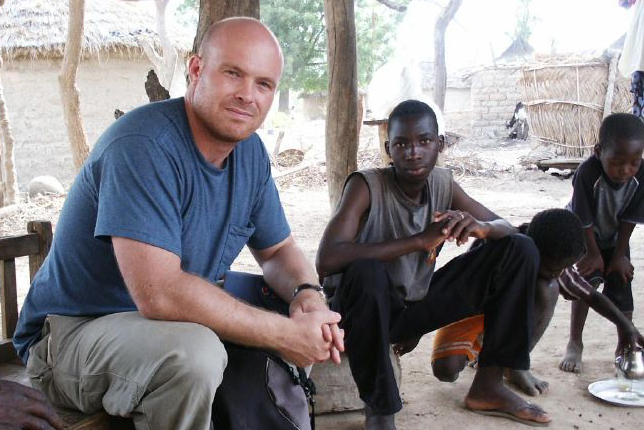 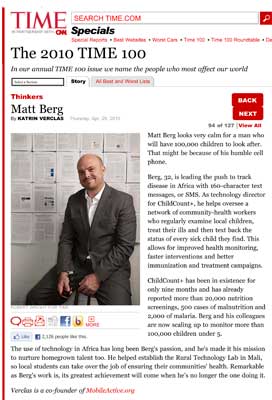 Matt Berg, a 2000 Knox College graduate and 2010 Young Alumni Achievement Award recipient who's expanding technology in developing nations, has been named one of the 100 "most influential people in the world" by Time magazine.

Widely hailed for his work to expand technology in Africa and developing nations, Berg won recognition in the magazine's annual list of the world's most influential leaders, thinkers, innovators, artists, and scientists, published April 29 on the magazine's website and print editions. He's at #19 in Time's roster of "leading thinkers" -- the list that puts artist Zaha Hadid at #1, Apple CEO Steve Jobs at #11, and Supreme Court Justice Sonia Sotomayor at #25.

Photo above, Matt Berg in an African village, featured on the the website BuildAfrica.org

Berg, writes Time, "is leading the push to track disease in Africa with text messages... As technology director for ChildCount+, he helps oversee a network of community-health workers who regularly examine local children, treat their ills and then text back the status of every sick child they find. This allows for improved health monitoring, faster interventions and better immunization and treatment campaigns. ChildCount+ has been in existence for only nine months and has already reported more than 20,000 nutrition screenings, 500 cases of malnutrition and 2,000 of malaria. Berg and his colleagues are now scaling up to monitor more than 100,000 children under 5."

Berg joins two honorary Knox alumni already among Time's Top 100 -- political satirist Stephen Colbert and Wikipedia founder Jimmy Wales. Both were named to Time's list of 100 Most Influential in 2006 -- the same year that Colbert gave the Commencement Address, and Colbert and Wales both received honorary doctorates.

Technology in Africa "has long been Berg's passion," Time writes. Berg, who spoke in Galesburg in February, was born in a village in Cameroon, grew up in Senegal in west Africa, and attended Springfield High School in Springfield, Illinois. At Knox, he participated in a study-abroad program in Zimbabwe and received his bachelor's degree in 2000 in computer science and integrated international studies.

Berg graduated from Knox with College Honors in integrated international studies for his undergraduate research project, "Bridging the Gap -- Zimbabwe: A Case Study of Information Technology Development in Africa." He then completed an MBA in international management in 2005 at the Thunderbird School of Global Management, where he was inducted into the business academic honor society Beta Gamma Sigma.

After working briefly for Web start-up companies in the U.S., Berg returned to Africa in 2005 as a volunteer for Geekcorps, a non-profit organization that expands Internet use in emerging nations. With Geekcorps, he helped create the Last Mile Initiative, which brings information technology to rural African villages. Berg earned a 2006 Tech Museum Laureate Award and was featured in CNN's "Business 2.0," "Make" magazine, and in the book "WorldChanging." He is currently the information and communications technologies coordinator for the Millennium Villages Project at Columbia University, where he oversees the use of technology to help achieve the United Nations Millennium Development goals in rural areas of Sub-Saharan Africa. 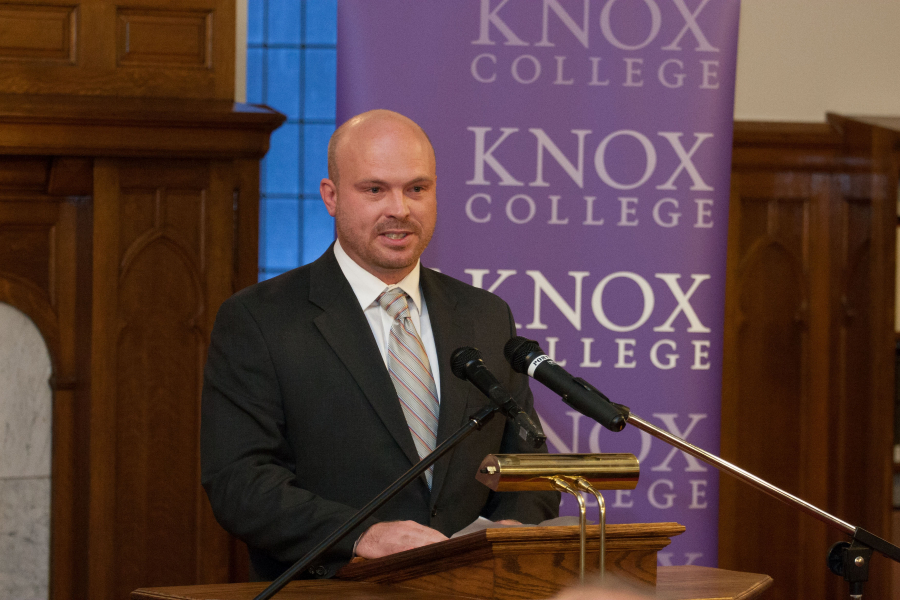 Berg is "an emerging leader in the field of mobile health, who is helping to pioneer the use of text messages to improve the delivery and monitoring of health services in resource poor settings," said John Dooley, professor of computer science at Knox in the Alumni Achievement Award ceremony in February. Among Berg's accomplishments, Dooley cited both his current work with ChildCount+ and his earlier development of Web-based accounting systems for African merchants and women's groups. The Young Alumni Achievement Award is given annually to a Knox alumnus younger than 35, in recognition of meritorious achievement in a field of endeavor and contributions to a community, state, or nation.

"My experience at Knox was everything I could have hoped for," Berg said in an interview with the Knox magazine after receiving Knox's 2010 Young Alumni Achievement Award. "I was exposed to a lot of new ideas and was challenged in ways I didn't expect... After growing up abroad, I greatly appreciated [Knox's] environment where diversity was deeply respected."

Berg's younger brother, Michael, graduated from Knox in 2002, and his cousin Rachel Koene plans to be a first-year student at Knox in the fall of 2010.