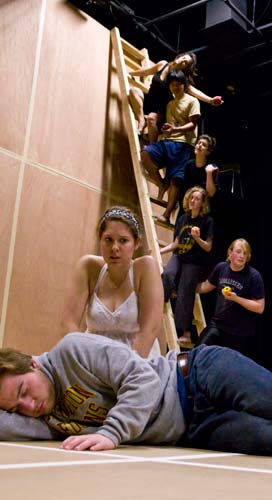 The Knox College Department of Theatre and Dance presents "The Serpent," by Jean-Claude van Itallie, at 7:30 p.m., Wednesday through Saturday, May 19-22, in Studio Theatre, Ford Center for the Fine Arts, Knox College, Galesburg, Illinois. Tickets are $10 for adults, $5 for senior citizens and Knox College alumni, and free to Knox College students, faculty and staff. Seating is limited to approximately 100 at each performance. Tickets may be reserved by calling 309-341-7472.

(Photos above, director Jeff Grace and students in rehearsal; at right, Eleanor Ognacevic as Eve, Nate Hults as sleeping Adam, ensemble on ladder.)

Described as a "ceremony" by its author, "The Serpent" is a work of experimental theatre that explores the biblical Book of Genesis by comparing it to the modern experience. It was developed in 1968 by van Itallie in collaboration with Joseph Chaikin and The Open Theatre.

"We are giving a post-modern interpretation to a play, written more than 40 years ago, that is already well known in the world of contemporary improvisational theatre," explains the director, Jeff Grace, visiting assistant professor of theatre.

The play uses a technique known as "transformational acting," Grace says. "None of the actors has a name or an assigned character to portray. Sometimes they step into roles, and other times they are playing themselves. 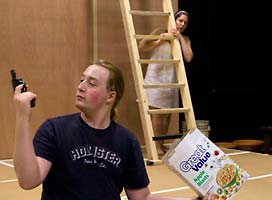 "The play presents images of Adam and Eve, Cain and Abel, and the Garden of Eden, and then compares them to images that we experience in today's society," Grace says.

"Hence, there is no single story-line or narrative. The intent is not to discover and expose what happened when Eve bit the apple or how the first murder occurred, but to ask audiences to view the images of the play and assign their own meaning to human existence and the state of the world."

The production begins with an empty set, and everything that appears in the play is brought out by the actors. "For the students, this is a different kind of theatre from the psychological realism that they're used to," Grace says. "We select productions to give students a range of performance experiences on stage during their careers at Knox."

(Photos right, Jay Robillard as Cain contemplates murder on the one hand, his biblical offering of cereal on the other, with Eleanor Ognacevic as Eve looking on; below, cast with director Jeff Grace, stage manager Alix DeWald with computers.) 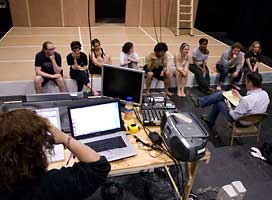 Founded in 1837, Knox is a national liberal arts college in Galesburg, Illinois, with students from 45 states and 48 countries. Knox's 'Old Main' is a National Historic Landmark and the only building remaining from the 1858 Lincoln-Douglas debates. 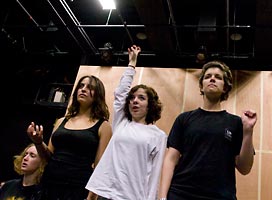