An Inside Look at the Challenges of Being a Virtual RA 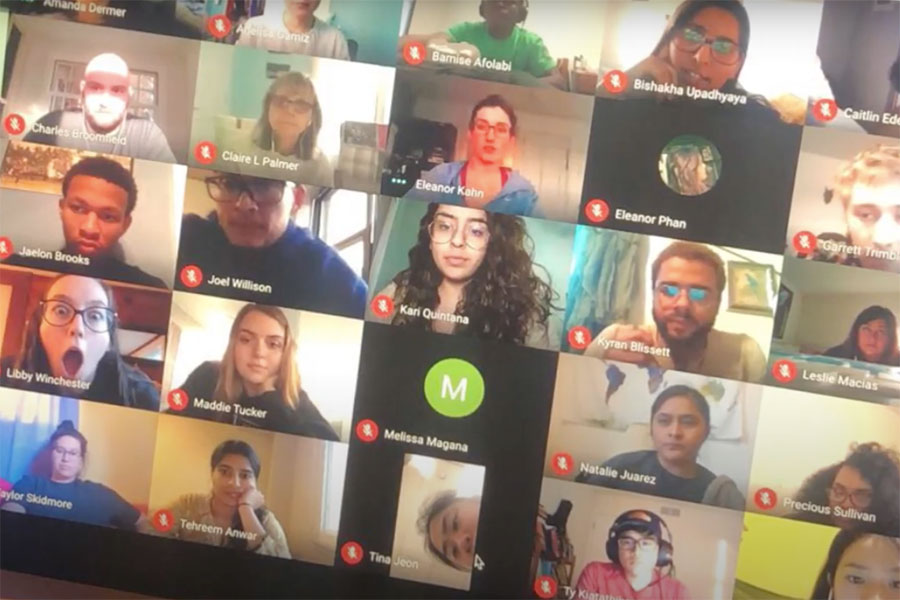 The spring 2020 term posed unprecedented questions for resident assistants at Knox, most importantly: How do you maintain a residential community without being residential? During the virtual term, the vast majority of Knox students lived off-campus due to the COVID-19 pandemic. However, for resident assistants like Ikenna Ozor '21, their RA responsibilities were far from over.

“Something that I tend to bank on is that face-to-face interaction: popping into the suite, seeing how everyone’s doing,” Ozor said. “During the spring term, I didn’t have that. It forced me to view my job in a different perspective.”

The virtual term made it uniquely difficult for students at Knox to have group interactions. Students from outside Illinois comprise a substantial percentage of the Knox student body, and Ozor noted how this created substantial time barriers among his residents. “It definitely moved to more one-on-one interaction virtually, and keeping in the back of my mind this idea that there’s a time change,” Ozor said. “People eat at different times and have things that they are doing with their families.”

However, RAs at Knox were able to overcome these time barriers with asynchronous programming for their residents. Jonathan Doriscar '22, an RA for returning students, discussed how important weekly newsletters were in connecting with his residents. “I just tried to have fun with it,” Doriscar said. “I started putting memes and GIFs. I started putting a lot more things about my life. I’ve realized that I want to adopt that moving forward, because it gives me a real chance to let my residents know who I am and interact with them when they respond.”

Aside from newsletters, Doriscar maintained his well-established residential community by making virtual adaptations of events he hosted during the previous two terms. For example, Doriscar used a combination of Discord video call service and Netflix Party to create a virtual movie night for his residents. “I wanted to watch a movie with them, but I also wanted to be able to talk, joke, and laugh with them like we did in person,” Doriscar said. “It really was a highlight of my term.”

Similarly, Ozor was able to connect with his residents online by hosting a “virtual pet showcase,” where students were able to parade their pets for their fellow residents. “It was cool that they could show their pets off to other people in the suite because a lot of them didn’t bring their pets with them to college,” Ozor said. “It felt good seeing my residents, even if it was through a screen. Just having small conversations with them was really cool.”

While maintaining a residential community online, RAs also had to juggle checking in on residents individually. This role was especially important for those overseeing first-year residents, like Allison LaSalvia '22.

“To me, the role of an RA is to be a student’s tether to campus: making sure they’re physically and mentally healthy, helping them build connections at Knox, and checking in on their classes,” LaSalvia said. “With everything going on, it definitely made it harder for people to focus on their course load. So my biggest challenge was managing my own course load, while also making sure that my residents were also balancing their stress and their course load.”

In addressing this challenge, LaSalvia highlighted the importance of flexibility in being an effective RA. “Being an RA this entire year has taught me a lot about being more flexible with people’s needs,” LaSalvia said. “Everyone has a different way that they need to be comforted and supported. Learning to accommodate those needs has helped me just as a human being.”

Likewise, Ozor stressed being readily available for residents as a means of dealing with academics during a virtual term. “If they needed help with anything, I made it known that I was available: just text me,” Ozor said. “Even if I didn’t know the answer, I could direct them to the right resource.”

Despite the difficulties spring term posed, RAs like Ozor focused on the positive relationships they facilitated and the life lessons they gained. “You really get a better sense of what people’s lives are like when they’re not at school,” Ozor said. “It’s different for a lot of people; that was a huge lesson for me to learn. It’s really about reaching out and never giving up on being that RA figure.”

Photo at top of the page: A virtual meeting of virtual RAs and staff members from the Division of Student Development.