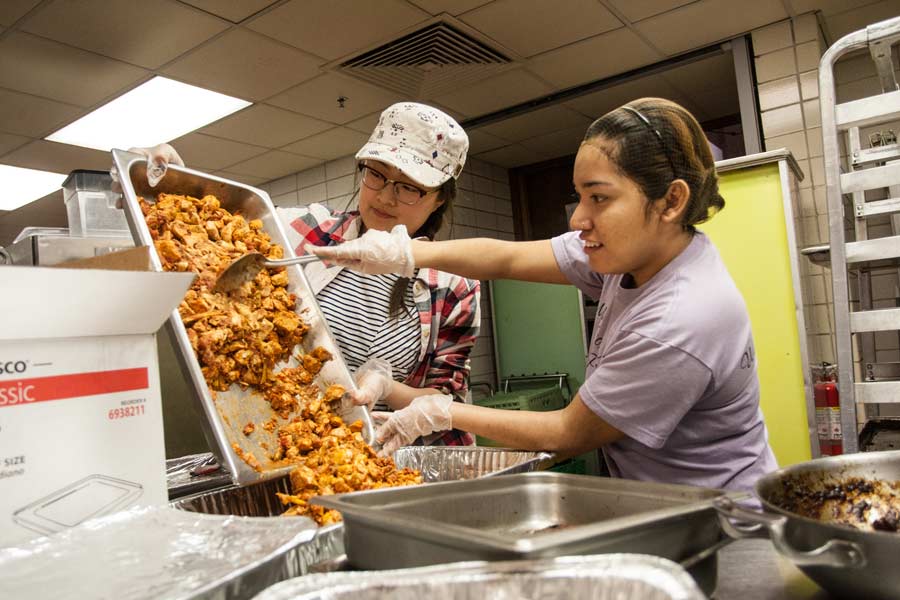 For a second straight year, Knox took first place in the Food Organics category of RecycleMania 2019, a contest attracting about 300 college campuses in 43 states. Separately, a report from the advocacy group Environment America ranked Knox as a leader among U.S. colleges in the use of renewable energy.

Knox achieved first place in RecycleMania’s eight-week competition by donating almost 5,000 pounds of surplus cafeteria food. RecycleMania, which is managed by the National Wildlife Federation and governed by RecycleMania Inc., is the nation’s premier waste reduction and recycling competition among colleges and universities.

“We do well in the RecycleMania Food Organics category because of the work of Knox’s chapter of the Food Recovery Network (FRN),” said Deborah Steinberg, Knox director of sustainability initiatives. The student-run group collects unused food and donates it to local organizations, including the Galesburg Rescue Mission and Safe Harbor Family Crisis Center, five days a week during Knox academic terms.

“All of the food recovered was never actually put out for consumption and is stored in the kitchen for volunteers to pack in correspondence with food-safety protocol,” said senior Michaela Kowalewski, president of the Knox chapter of the Food Recovery Network.

Another FRN initiative, “Weigh the Waste,” builds student awareness about how much food they might leave uneaten on their plates.

“Through our [food] recoveries, club events, and campaigns such as Weigh the Waste, we hope to make the Knox College community more aware of the environmental effects of food waste, offering suggestions to reduce food waste in our daily lives and setting the gold standard for eliminating food waste on our campus by donating leftover food to our partner agencies for human consumption,” Kowalewski added.

Steinberg said that the College participates in what is known as the Renewable Energy Credits (REC) market, in which energy producers sell the credits to energy consumers. Knox currently purchases RECs produced by wind power in the Midwest.

Knox buys enough RECs to offset the amount of electricity the College uses each year, she said. As a result, “we can attribute 100% of the electricity we use to renewable energy production.”

Knox also produces some of its own renewable energy through a small array of solar panels that were installed on Wilson House in 2017.

(Photo at top of page: Knox students in the Food Recovery Network pack food for distribution to Galesburg organizations.)

Return of the Flunk