Knox College students and faculty have joined with a group of former employees of Maytag's Galesburg Refrigeration Plant, to survey hundreds of workers who lost their jobs when the plant closed in 2004.

"The survey will trace how people's lives have changed since the plant closed," said Marilyn Webb, chair of Knox's Journalism Program. "It focuses on job retraining, availability of new jobs, health, income, and individual and family well-being."

"We believe this is the first study of what happens to a particular group of people when a workplace such as Maytag closes," Webb said. "We selected 430 people at random from the list of 900 union employees who were let go when the plant closed in September 2004." Webb and her students began mailing the survey forms on August 2.

Photos: Above, professor Marilyn Webb with students Ryan Sweikert and Annette Zak assembling surveys for mailing; below, Webb and student Levi Flair edit a cover letter that accompanies the survey. 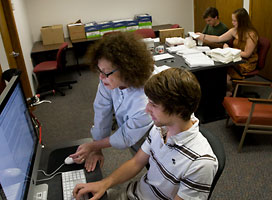 The survey is accompanied by a cover letter from David Bevard, former president of Local 2063 of the International Association of Machinists and Aerospace Workers, the union that represented many of the employees at the plant.

"It has been six years now since all of us ended our 'Maytag experience'," Bevard wrote in a cover letter. "Together we shared something that is very difficult for anyone to understand unless they were a part of it. Today, we are all in very different places than we were then. Some are better, some worse, some are just different."

Starting in the 1930s, the plant manufactured refrigerators for a series of owners, including Admiral, Rockwell International, Magic Chef and, starting in 1986, Maytag. During the 1990s, as many as 2,700 were employed at the plant. In 2002 Maytag announced that the plant would close, as it shifted refrigerator production to Mexico and South Korea.

"Comprehensive study" of the lives of laid-off workers
Until the plant closed in September 2004, both the union local and Maytag kept records of former employees, Bevard said, but since then "there has been no comprehensive study to find out what happened to us."

"Did people land on their feet or are they still struggling? How many people had to move to find work and survive? How many were able to stay? Did retraining programs help? Until this survey, there has been no work done to determine what the final outcome was for the workers at Maytag," Bevard said.

Developed in consultation with several former Maytag employees, the survey was written by Knox faculty in sociology, economics, statistics and education.

Journalism students receive fellowships to work on survey
Three Knox students who have worked on the project this summer were awarded study stipends as Borzello Fellows in Journalism. The fellowships are supported by a gift to Knox from Robert Borzello, a 1958 Knox graduate and publisher in England noted for his work on ethics in news reporting.

Responses to the survey will be compiled anonymously, Webb said. "The surveys are numbered, but no names are attached. There will be no way to find out who filled out what."

The project grew out of a Knox College journalism course earlier this year, in which students profiled nine former Maytag employees. Several of the former employees formed an advisory group to help develop the survey questions -- Melissa Bowling, Christine Britton, John Eskridge and Rebecca Nott, all of Galesburg; Linda Rice of East Galesburg; Barrie Schaffer of Abingdon; and Dyson Shannon, Jr., of Alexis.

"I would like to urge everyone to please take a few minutes and take the survey," Bevard said. "Maytag employees were an outstanding group of people. Many have said that they were like family. Let's find out what has happened to our family, good or bad, and complete our story."