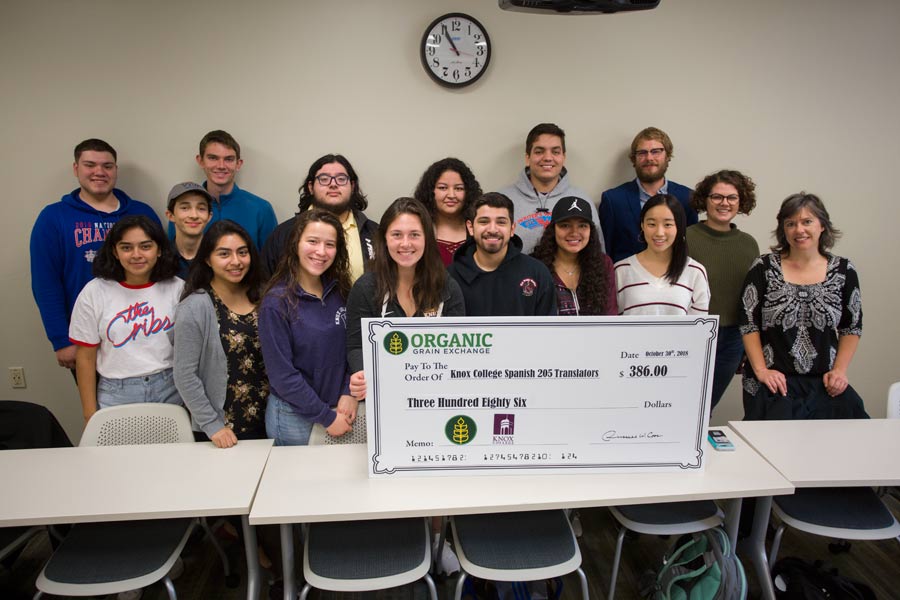 When Russell Coon '08 and his colleagues needed someone to translate their startup company’s contract language from English to Spanish, they turned to Knox College for help.

As a result, students in Spanish 205 (Introduction to Spanish Translation) had the opportunity to hone their skills and earn nearly $400 by taking on the project under the supervision of Robin Ragan, associate professor of modern languages (Spanish).

“It was a challenge that I found fun to do. It was sort of like a puzzle,” said Alexis Ramirez '21, who took Ragan's class during the 2018 fall term and is majoring in Spanish and psychology.

Ragan said she thinks it’s important for the students in her classes to work on “real-life projects.” During previous academic terms at Knox, for example, her students have translated documents for the Knox County Health Department and for the Galesburg region’s Court Appointed Special Advocate (CASA) program.

“That way,” she said, “you feel like what you’re doing has an impact.”

In fall 2018, students in her translation class built up their skills by translating an obituary, a transcript, and a birth certificate before they tackled the more complicated project for the startup company. Toward the end of the term, they also translated into English a Spanish-language annual report for a community organization in Oaxaca, Mexico, and Ragan and some students hand-delivered the report during a winter break trip to Mexico.

Students worked in small teams, each headed by an editor, to translate their assigned section. The class also created a shareable, online glossary to ensure that the teams consistently translated specific words and phrases that were used repeatedly throughout the English-language document.

Students said they enjoyed the collaborative nature of the project.

“During class, we would meet with our editors and discuss challenging words or phrases of the translation. Every single decision that was made needed to be followed by the whole class in order to have continuity in the final ” said Isaac Hughes '21, who is majoring in environmental studies and philosophy.

“The legal jargon made translation slow and challenging,” Hughes added. “A lot of the legal phrases that I encountered were totally new to me, so I had to research what they meant in English before even considering how to translate them. This really forced me to be a cautious and thoughtful translator.”

Maika Padilla '21, who plans to major in political science and Spanish, said she appreciated participating in the project “because it has given me a sense of what it is like to translate an actual important document for someone. It was a challenge, but I knew this challenge would strengthen my skills as a translator.”

Coon, who majored in economics at Knox, is one of three partners in Organic Grain Exchange, a startup company that connects organic food producers with buyers. He said the students’ work will benefit the business, especially in its future interactions with Spanish-speaking customers.

“What you’ve done is truly appreciated,” Coon told the students.

(Photo at top: Russell Coon '08, far right in back row, Professor Robin Ragan, far right in front row, and students in her Spanish translation class with the oversized check that Coon gave them for their work.)