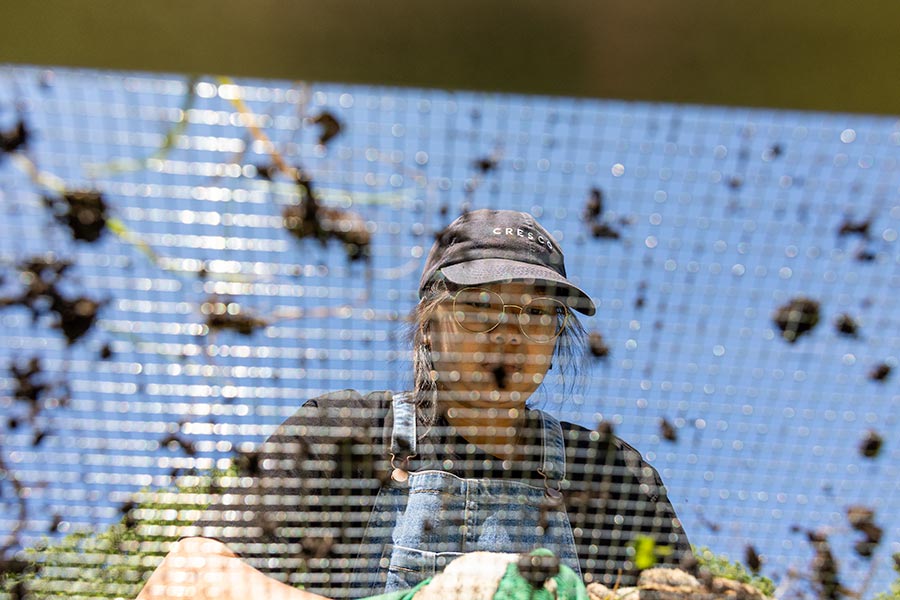 Ever since Knox’s new minor in archaeology was approved in spring 2019, Associate Professor of History and Chair of Archaeology Danielle Fatkin has been on the hunt for local archaeology projects for students pursuing the North American Archaeology track

“Archaeology is always a combination of theory and practice,” said Fatkin. “On campus, students learn about the main tenets of archaeology as a discipline—definitions of terms for practitioners, the history of the discipline, important discoveries, and techniques of analysis. The practicum is about putting that abstract knowledge into practice. It's the difference between hearing a story about how something works and actually doing the thing itself. The story can help you understand but it's no substitute for the real thing.”

“One of the requirements [for the minor] is a practicum, so I've been making connections with local archaeologists and museums to support that part of the program,” said Fatkin. Last winter, she reached out to the Illinois State Archaeological Survey (ISAS), who put her in touch with Tom Loebel, the associate director of ISAS and director of the DeWulf excavation. Loebel “was looking for volunteers, and I knew that I had archaeology students who would want to go,” said Fatkin.

Fatkin says Alumni Council member Elizabeth Presley Bazan '05, who is currently the acting head of audience engagement at the Illinois State Museum, is the person who connected Knox with the DeWulf site, a Paleoindian site that dates back to about 9,500 years. The original purpose of the site is unknown, though several of the archaeologists are forming theories based on some evidence from the materials.

Hannah Dixon '23, one of seven student volunteers who had taken Fatkin’s Introduction to Archaeology course, spent 32 hours at the site. “I’d never been able to participate in the actual digging of an active archaeological site,” she said. “[So] I wasn’t quite sure what to expect of the dig site, perhaps I had imagined a wide-spreading scape of dug-up earth and workers spread everywhere digging.”

“The site was in the middle of a cornfield of someone’s farm and with the rain, was pretty much continuously muddy,” Dixon said. She said that the atmosphere of the dig was not intimidating and that she enjoyed learning from some amazing seasoned archaeologists—all of whom were “incredibly nice and witty and willing to explain anything and everything we had questions about.”

Over the course of two weekends, participants met at Alumni Hall at 7:30 a.m. and arrived at the site about 45 minutes later.  Once on-site, the lead archaeologist would give the newcomers a breakdown of what type of materials they were looking for and a brief explanation of how he thought the site was originally used. After going to the dig site, someone—usually a student accompanied by an archaeologist and other volunteers—dug a square plot.

“The digger would have to carefully shave off layer by layer of soil and dump that dirt in buckets,” said Dixon. Those buckets were handed off to other volunteers, who used “a sieve to separate the soil from any large material within it. The diggers would switch out after each square,” allowing each of the volunteers to get experience.

Dixon said that she thought almost everything they found was interesting. “I was so excited to finally be on an archaeology dig, but some of the materials that stood out to me were different parts of arrowheads (i.e. the tip, middle, or base), large pieces of hixton [a quartzite crystal used to fashion arrowheads and other tools] and galena [an ore that was a common source of lead] and pieces of copper. All the materials were about 9,500 years old, and when we would pull the piece from the soil, we were the first person touching that material since it was used.”

“Working with the DeWulf site has made me more determined to pursue a path of archaeology,” said Dixon. “I’ll be looking out for other opportunities to participate in excavations. Some of the archaeologists on the site were open to working with us again and inviting us to more sites, both of which I look forward to.”

“I was inspired by my work with students this spring to consider creating a field school for our students in Illinois,” added Fatkin. “A field school in Knox County will allow us to investigate local history, be more affordable for students, and will fill a gap for students who want to be archaeologists in the U.S. I’m looking forward to working with Katie, the curriculum committee, the provost, and the president to make this idea a reality.”

Learn more about archaeology at Knox.

Pictured above: Jia Self '23 presses a sample through a sieve to separate soil from any larger objects. She was one of several students who took Intro to Archaeology during Knox's inaugural summer term. 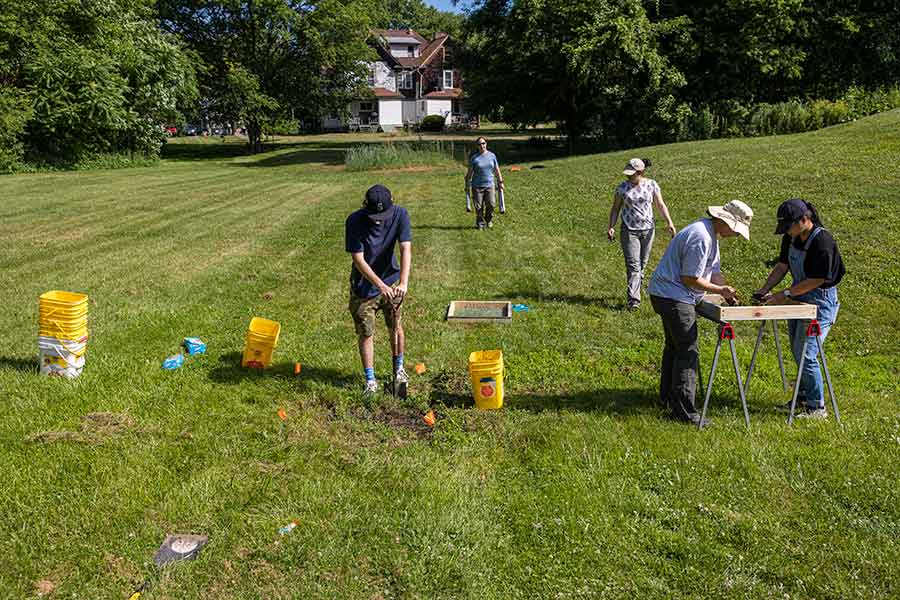 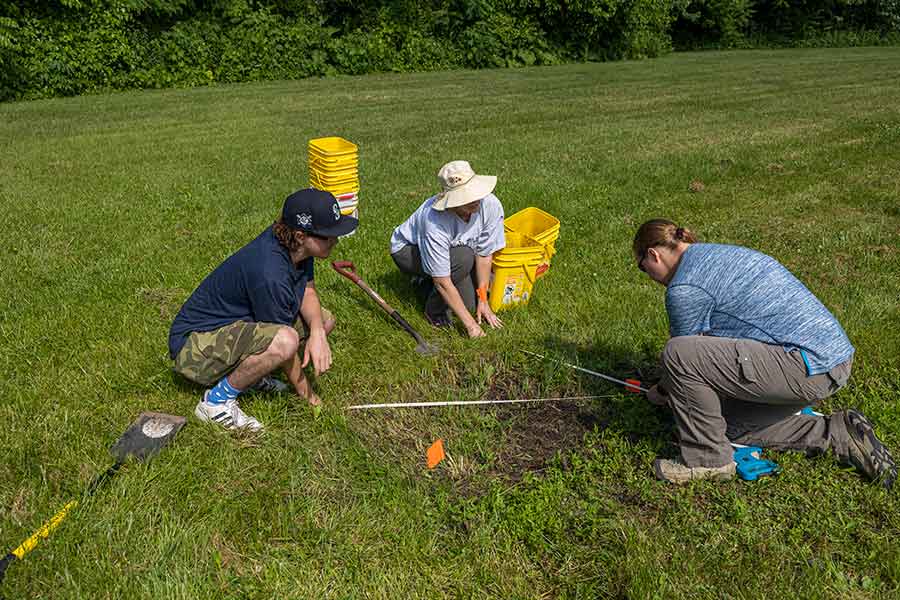 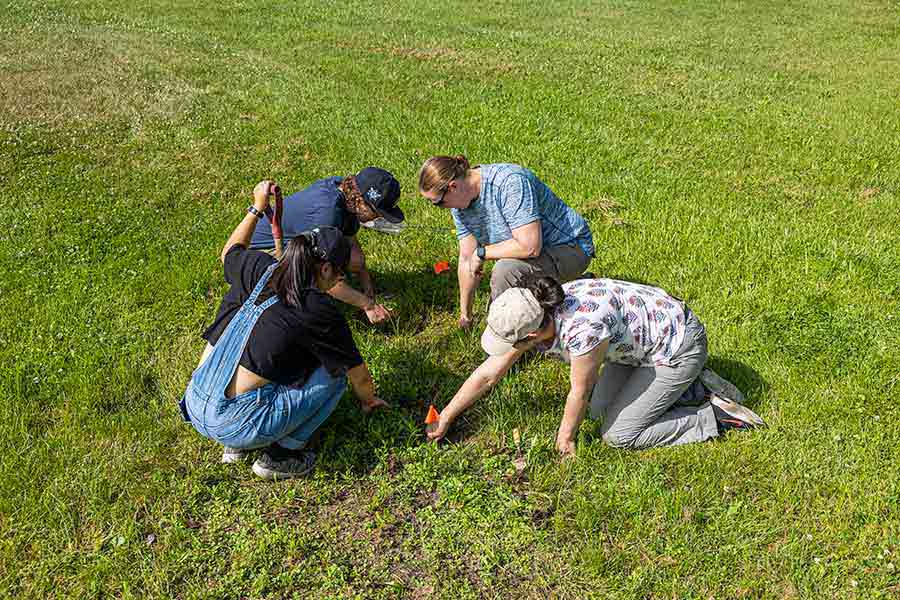 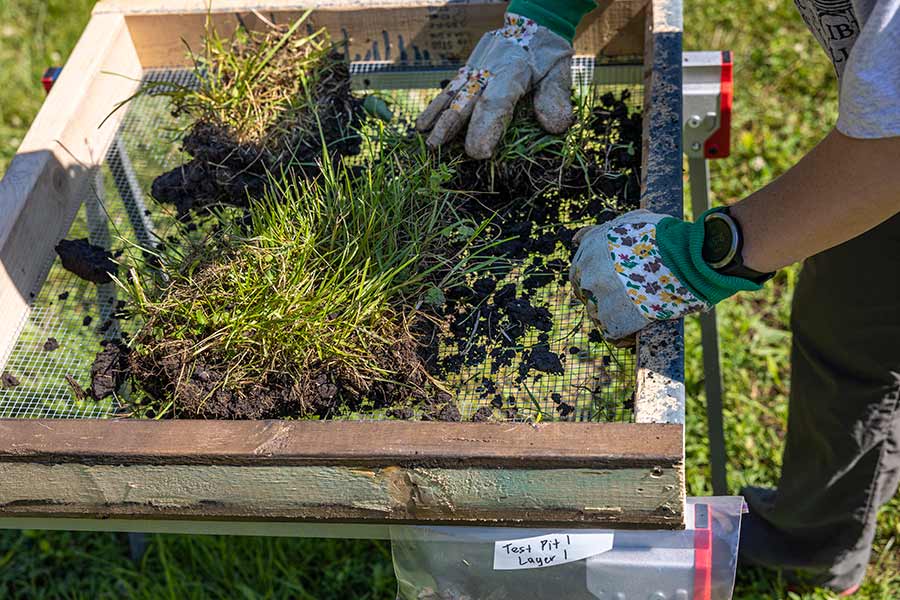