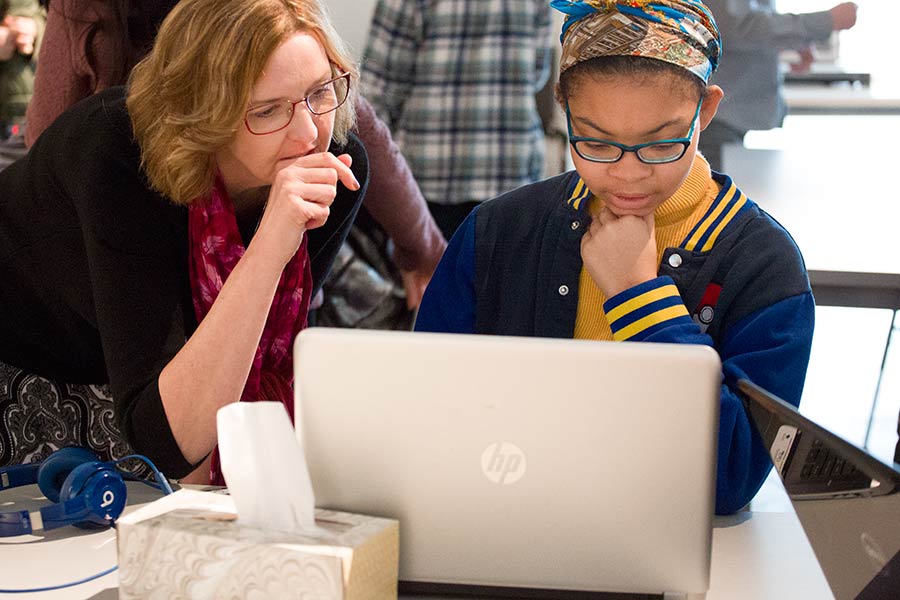 Knox computer science students are applying the skills they learn in the classroom to help patients with an autoimmune disorder.

Assistant Professor of Computer Science Monica McGill began researching Sjögren's Syndrome five years ago when her daughter was diagnosed with the disorder. She brought her research to her CS 292 Software Development class and challenged her students to use the research to come up with ideas for apps that could bring much-needed awareness to the syndrome.

"Show-grins. Like the word 'show' and then 'grin,'" McGill clarified. "It's actually more prevalent than lupus, but people have heard of lupus. They don't know how to pronounce this strange thing."

By the end of winter term, Knox students had designed several prototype apps to meet a variety of patient needs and had built the framework for two apps. The first presents general information about the disease in a way that is easy to understand. McGill realized this was needed after her own experience when her daughter was diagnosed.

"I think at least getting basic information would have been helpful," she said. "If someone's sitting in the doctor's office, for example, and they just learned that they had [Sjögren's], they could download this app and their family could as well."

The second type of app students are developing is a symptom tracker, as suggested by Sjögren's patients surveyed for McGill's research. "Because the symptoms are so unusual, it's nice to have something particularly targeted for patients," McGill said.

Computer science major Musa Khan '20 said that the project showed him the human application of the skills he's developing.

"Throughout my class and the time I was working on our assigned project, I learned vast details about Sjögren's, and I met with people who were suffering from it to gain their valuable feedback on what they need from an application," he said.

McGill hopes to work with students further in developing these apps, either through independent study or by integrating the project into future courses.

"They'll have a published product at the end," McGill said. "It's really great practical experience, working with a client and getting to test with patients."

For Khan, the value of the project went beyond practical experience. "I always felt a need to help people through the various skills that I learned, and this gave me the perfect opportunity to do that."

Photo above: Assistant Professor of Computer Science Monica McGill works with a student in class.