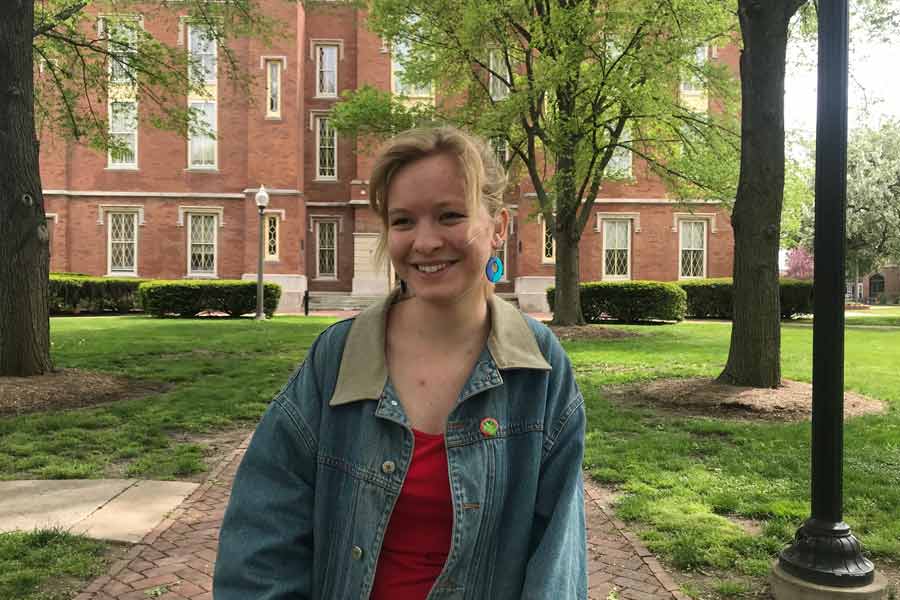 Knox College senior Franziska Hofhansel, a creative writing major and editor-in-chief of Catch magazine, has been recognized as a finalist for the Nick Adams Short Story Contest hosted by the Associated Colleges of the Midwest (ACM).

The contest is open to current students at ACM colleges, and students interested in writing fiction were encouraged to submit work to their school's English department for consideration. Hofhansel’s submission, “These Small and Tedious Longings,” was among the finalists from which the winning story was selected.

Hofhansel described the plot of “These Small and Tedious Longings” as “an unhinged experimental piece that reflects my disdain for golf and capitalism. The narrative revolves around the antics of a golf cult that steals land and forces the townspeople to work for criminally low wages.”

“The writers I most enjoy are the ones who clearly value compassion in their work, and who care for their characters enough to allow them intimacy and tenderness beyond junctions within the plot,” she said in explaining how she came up with the concept. “I was trying to write something in which characters function both as political actors whose experiences often encompass collective suffering, and as people who still manage to find joy and compassion despite the cruelty they’re so often subjected to.”

Hofhansel said, though, that the story eventually became less about political tensions and more about the narrator’s individual struggle. “[She] grapples with the ramifications of her queerness, which places her in a radicalized space she feels insufficiently empowered by to reside in.”

Studying theory profoundly shaped Hofhansel's writing. “The literature courses I’ve taken at Knox have helped me better understand the ways in which literature produces and reflects political ideologies, how we as writers arrive at certain tropes and rhetorical devices and how we can better understand our instincts in the context of social hierarchies.”

She said that she usually ends up producing a lot of writing when taking a literature course because of an interest in mimicking the stories she reads in class.

“While writing ‘These Small and Tedious Longings,’ I believe I was reading Richard Brautigan’s In Watermelon Sugar and Jane Austen’s Mansfield Park,” she said. “Recently I’ve been reading the poetry of Gerald Stern, Irene McKinney, and Claudia Rankine, and fiction from Cris Mazza, Mary Gaitskill, and Lynne McFall.” When asked what she would recommend to aspiring writers, she answered, “Please read Heartbreaker by Claudia Dey.”

Hofhansel's work on an Honors project and close relationships at Knox also had a large influence on the development of the style she came to use in this story and others. “[My project] included a lot of hybrid work—essays which include creative and analytical nonfiction, fiction hovering between realism and surrealism—and I think I’ve become more comfortable experimenting with language and genre while maintaining concern for structure and coherency. Mostly though, I’m very grateful to have worked with faculty and students whose talent and compassion for others’ work has helped me become a much better writer and critic.”

Hofhansel’s story can be read online, and more information about ACM and the Nick Adams Short Story contest can be found on the contest website.