All photos in this news story by Jeff Dunn, Jazz Photography.

The Rootabaga Jazz Festival returned to Galesburg May 3-7 with high-energy, spirited performances for a celebration of its 40+ year anniversary. Headlined by the Matt Wilson Group, the event showcased the outstanding Knox College jazz program and provided the Galesburg community with out-of-the-ordinary musical experiences, featuring outstanding musicians from across the country.

The Matt Wilson Group featured the dynamic Wilson on drums and other percussion instruments, leading an all-star band with Jeff Lederer on reeds, Ben Allison on bass, Dawn Clement on piano and vocals, and Tia Fuller on sax. Fuller was the featured saxophonist in the Pixar movie, Soul.

In 2018 Matt Wilson told me  ‘I want to do the 40th! I'm going to make it special,' " said Andy Crawford ’00, managing director of the Rootabaga Jazz Festival. “And he put together his Mount Rushmore of his favorite musicians to perform with. They had never performed together as a group, and they each brought a few tunes, and then he let the magic happen.”

Wilson and Lederer toured seven area schools, performing for elementary, junior high, and high school students on Tuesday and Wednesday, May 3-4. Joining them were Crawford on bass, and Derel Monteith on piano. They performed a joint concert with the United High School bands on the evening of May 3, including an amazing moment, when the entire United Wind Ensemble joined the quartet in an improvised composition by Wilson.

On Friday, May 6, jazz bands from local schools, Churchill Junior High and Galesburg High School, started off the evening at the arts center, performing to a full house of parents, friends, and community members. They were followed by the District #205 Faculty Jazz Combo. “We pulled together the band directors from the schools for a performance,” said Crawford. “It was great for the students to see their band leaders performing live in front of an audience.”

The Knox Alumni Big Band, led by Malley and representing decades of Knox jazz alumni, both students and faculty, continued the evening. Performers returned from across the United States for a brief rehearsal on Friday afternoon and a Friday night performance. Other alumni were among the audience that evening, reminiscing about their days of jazz and Knox. “This is their homecoming,” said Crawford. The performers presented Malley, who is retiring from Knox after nearly 20 years, with special gifts of appreciation at the event.

“I was truly overwhelmed by the outpouring of love and support and congratulation for what has, honestly, been just a total honor and privilege to be a part of,” she said. “I am the luckiest person I know. I have been blessed beyond belief to be a part of something bigger than me. Something about Galesburg and Knox and music. Something about community across decades. And this weekend, after two years of isolation and separation and struggle, here we were to celebrate all those things together.” 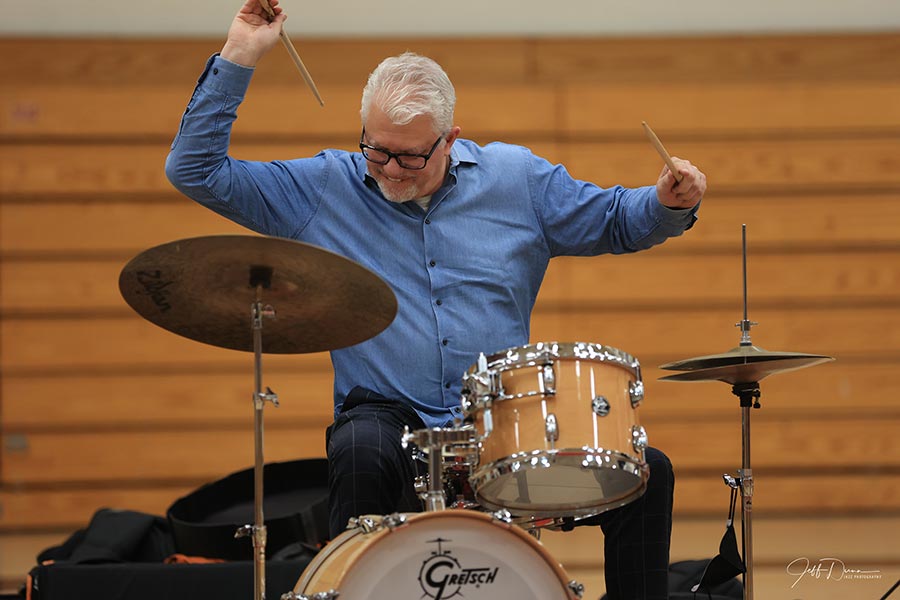 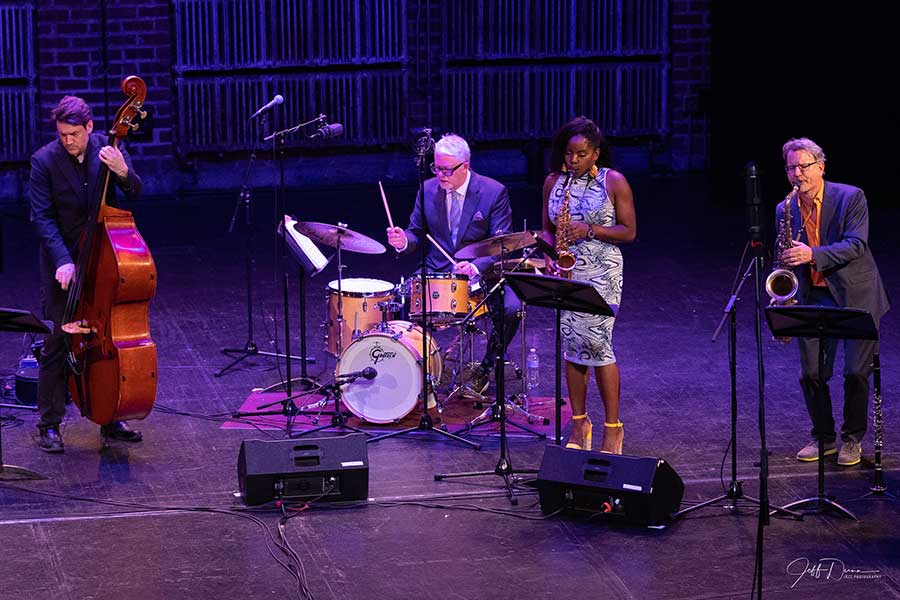 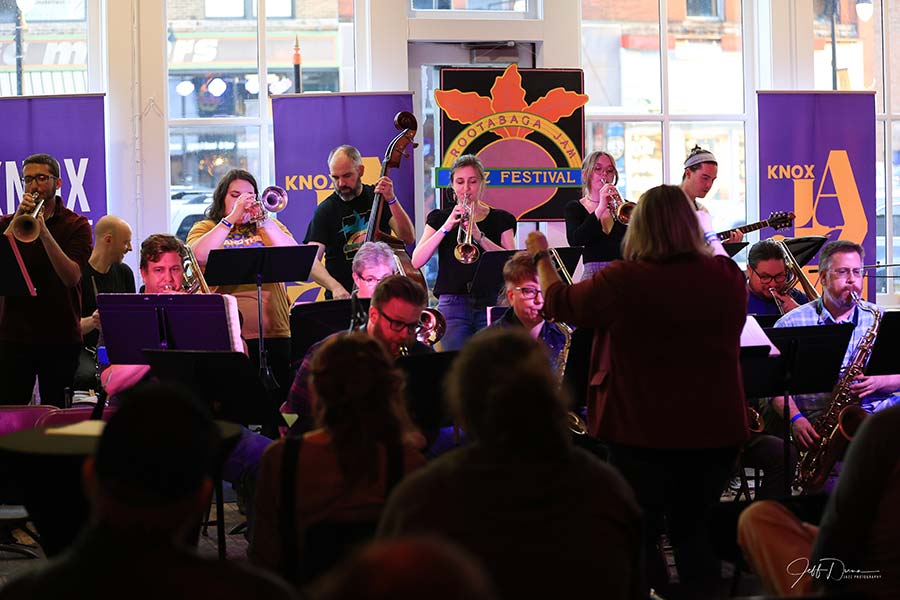 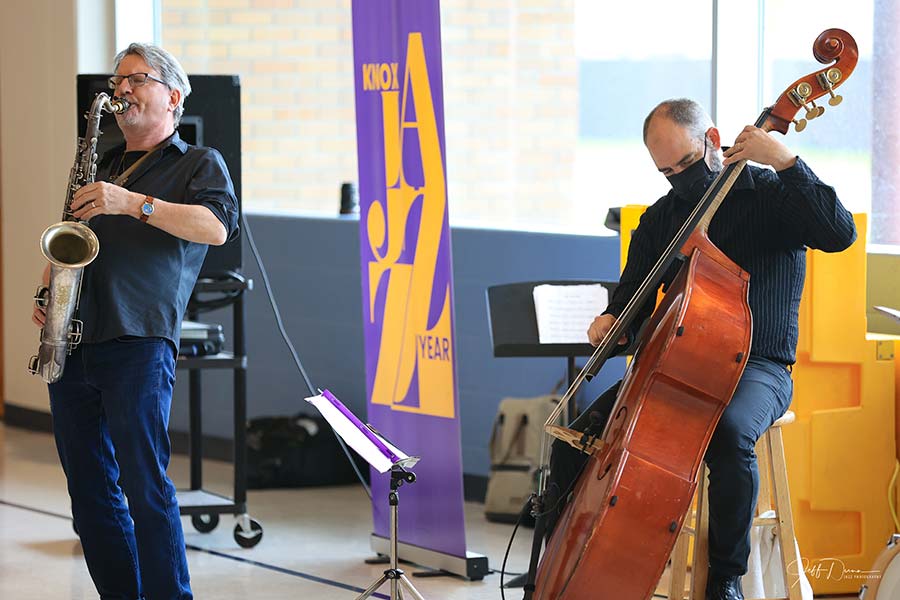 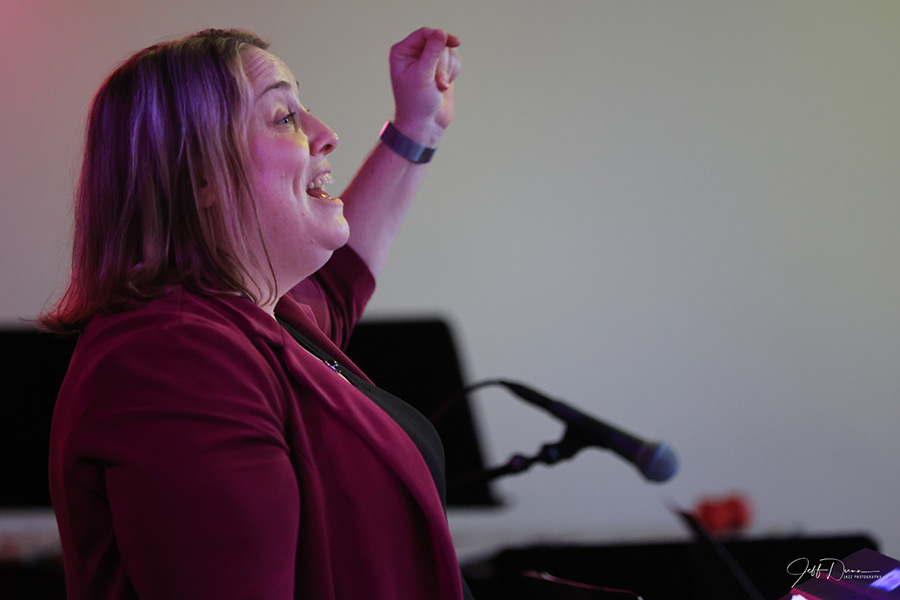 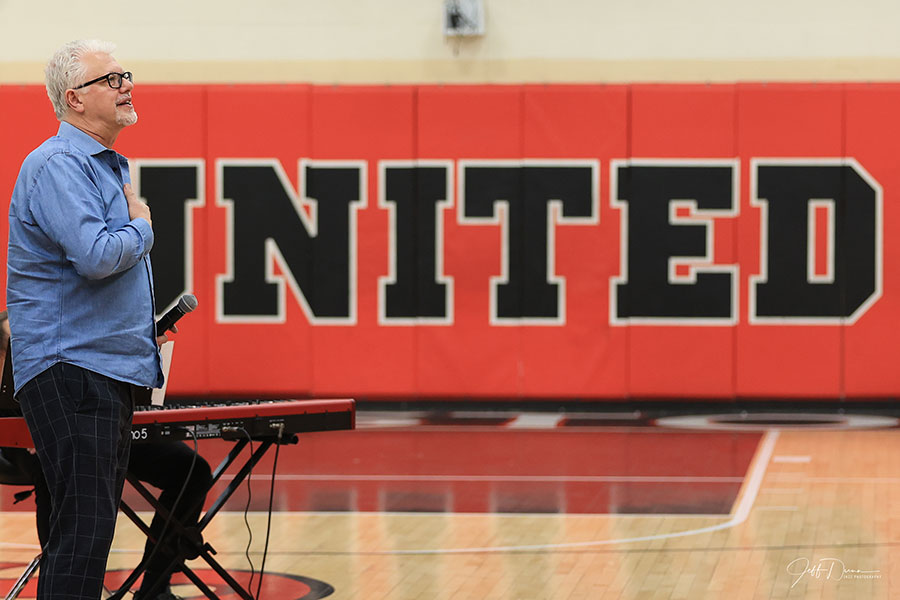 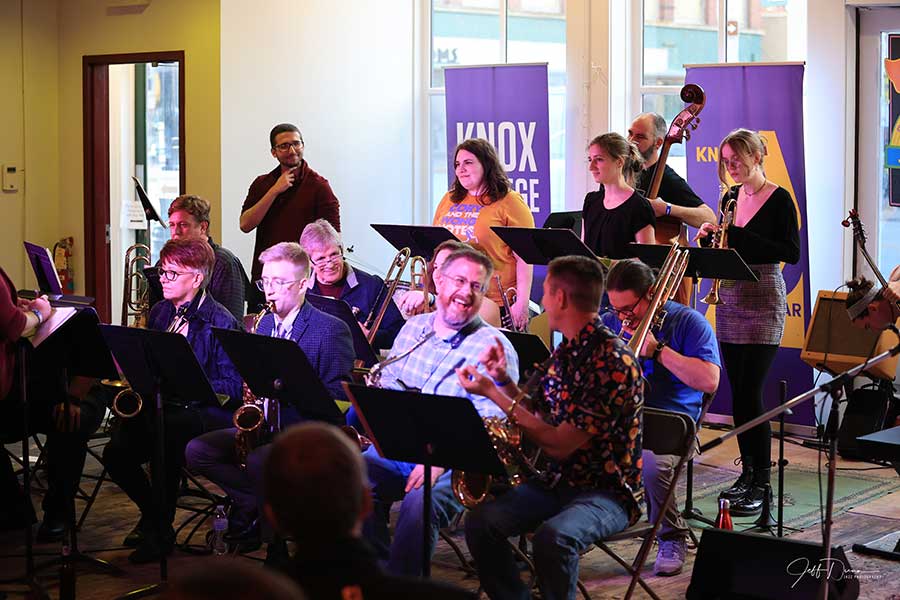 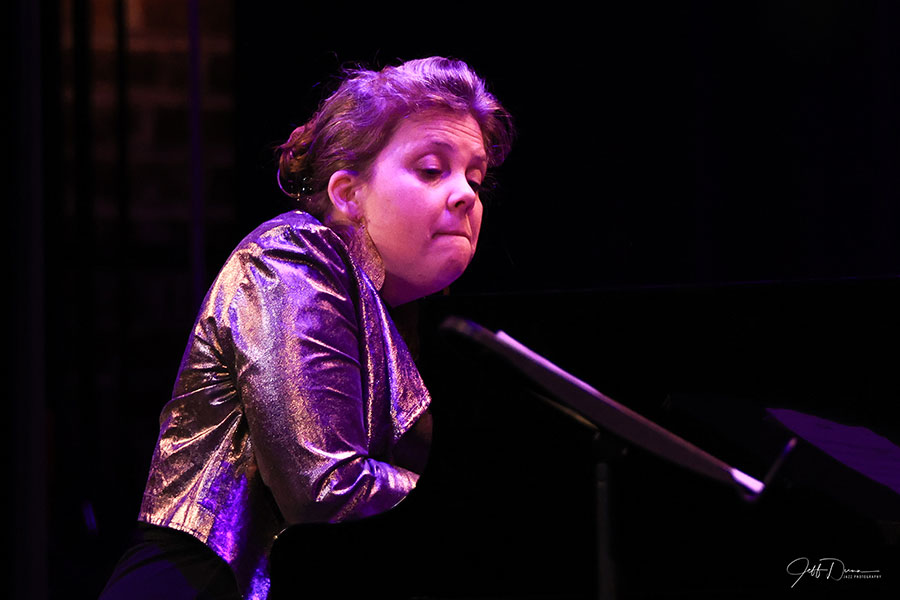 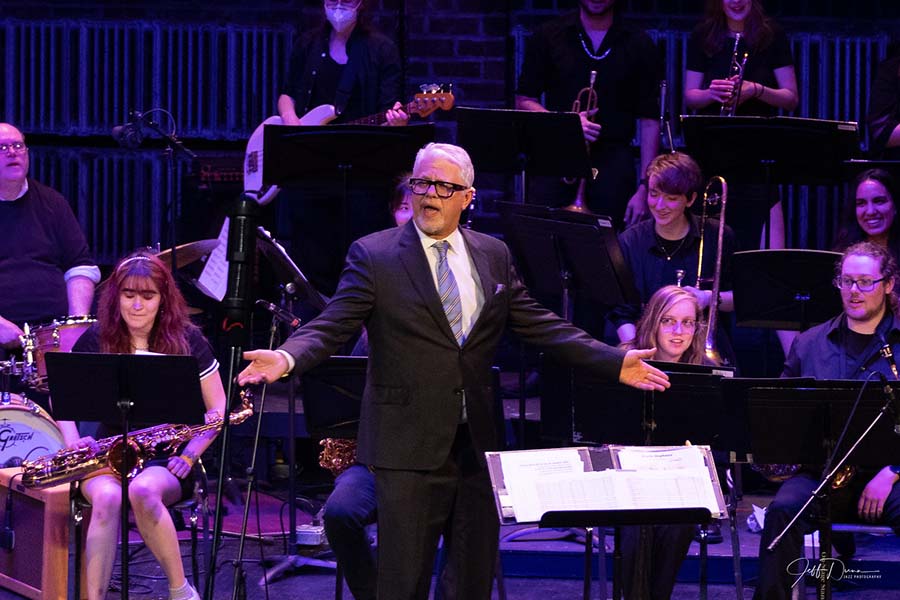 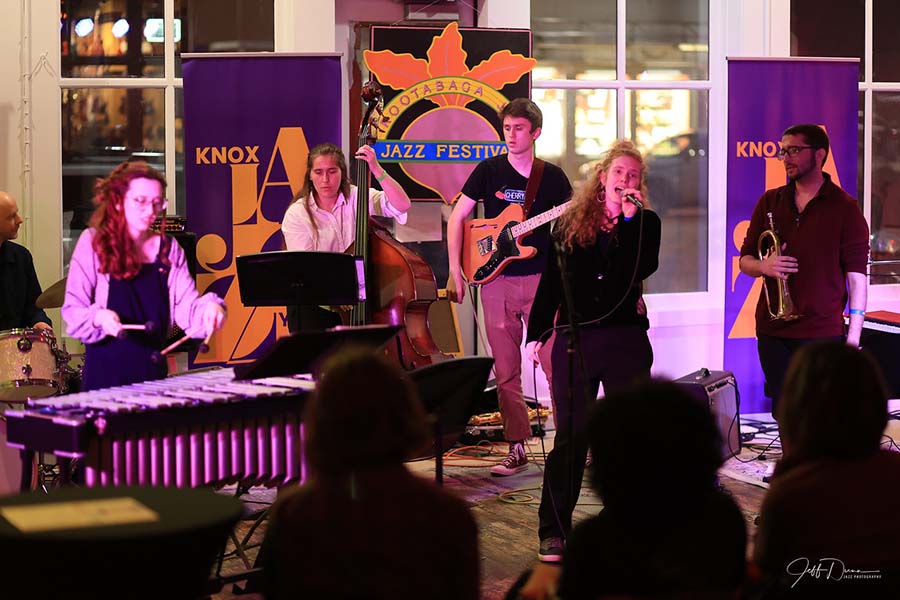 The Matt Wilson Group played on Friday night with a short set by the Cherry St Combo during their break.  “Usually, we have a school tour artist, a Friday night artist and a Saturday night artist,” said Crawford. “This year Matt did it all–which he wanted to do. For many people, Friday was the highlight of the festival. It’s always really cool to see a group of that caliber up close and personal.”

On Saturday morning, the Matt Wilson Group gave a presentation to families at the Galesburg Public Library. The headline concert at Galesburg’s Orpheum Theatre that evening featured the Knox Jazz Ensemble, conducted by MacKinnon, with cameo performances from Wilson and his group. Selections included Chinoiserie, composed by Duke Ellington; Black Orpheus, by Luiz Bonea, and a number of pieces, including 25 Years of Rootabaga, composed by Wilson.

For the final event of the festival, the Matt Wilson Group again brought a high-spirited performance to the stage. Highlights included Clement’s jazz performance of the John Denver song “Sunshine on My Shoulder,” and Fuller’s moving tribute to her mother, who died only a week prior to the performance. Wilson, a native of Knoxville, Illinois, shared his composition “Appleton,” about his grade school, which is now in ruins. “I pulled a brick from it as a memento,” he quipped.

Wilson also thanked the festival and organizers Malley and Crawford (aka “Crawdaddy.”) “I tell people around the world about this place and this festival. It’s great to be here and great to perform at this wonderful event,” he said.