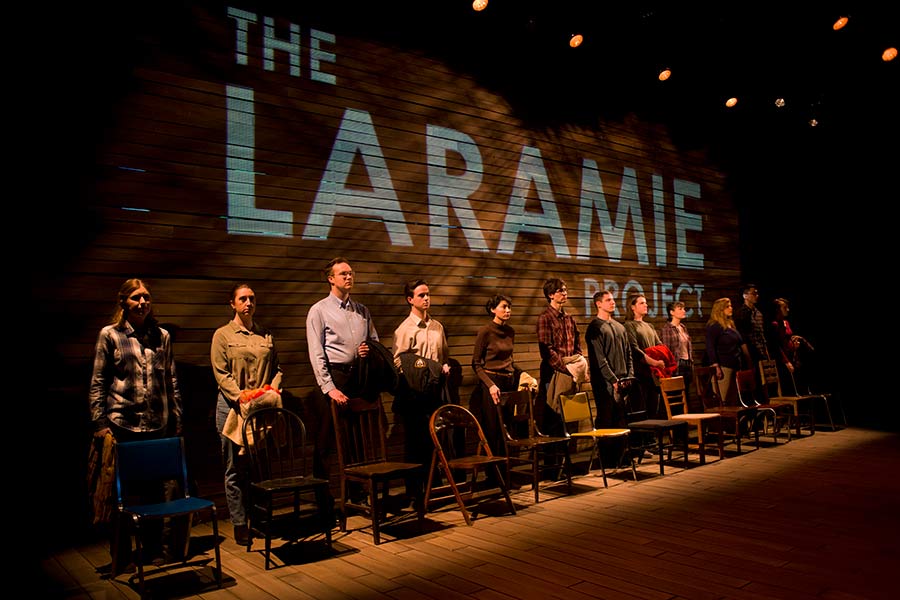 Paula Pierce ‘20 can still recall how emotionally charged the opening night for The Laramie Project was.

“Right at the end of the show, the entire ensemble stood in a line upstage and we were all backlit by the sparkling lights of Laramie, Wyoming. The stage lights went out and all the audience could see was our silhouettes, while we could see all their faces,” she said.

“That night, we nearly had a full house. I looked into the crowd and I could see all the people that were touched by the show because they were visibly crying. The lights went out and as the bow lights came up, the crowd rose in unison to give us a standing ovation. Then, we all came downstage to bow and thank them.”

The Laramie Project was one of the two plays presented by Knox’s Repertory Theatre Term, an immersive term specifically designed so the participating students, along with faculty directors and designers, devote all their time to all aspects of producing two full-length shows. It is the only undergraduate theatre program in the United States that embeds academic study of theatre within the experience of forming a repertory company.

While faculty members echo the term’s aim to encourage teamwork, resilience, project management and the like, students remarked on how personal and invigorating the experience was.

Pierce looked to Rep Term as a way to enhance her theoretical knowledge of arts administration. She had three production assignments–company manager and costume crew chief for The Laramie Project and house manager for The Children’s Hour. She was also cast in The Laramie Project.

“I've learned a lot from my classes so far, but there was nothing akin to actually working with people and building those skills,” she said. “My favorite role during the term has to be company manager. I was able to learn a lot about teamwork and communication in an environment that encouraged growth and experimentation.”

Pierce and other students alternated between production meetings, classes in dramaturgy, rehearsals, and collaborating on multiple crews (such as set construction, props, and publicity). They followed a schedule that often ended at 11:00 p.m during rehearsals.

“Thinking back now, I can still feel the stress of every moment of technical rehearsal week,” Pierce added. “But Rep Term was an amazing and gratifying experience. There are so many skills that you can only truly grasp in an immersive setting.” 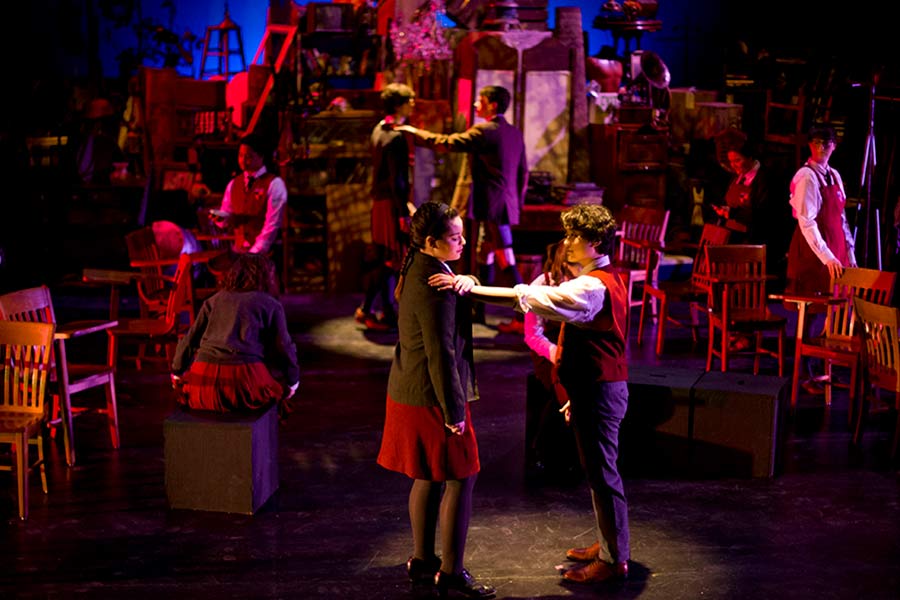 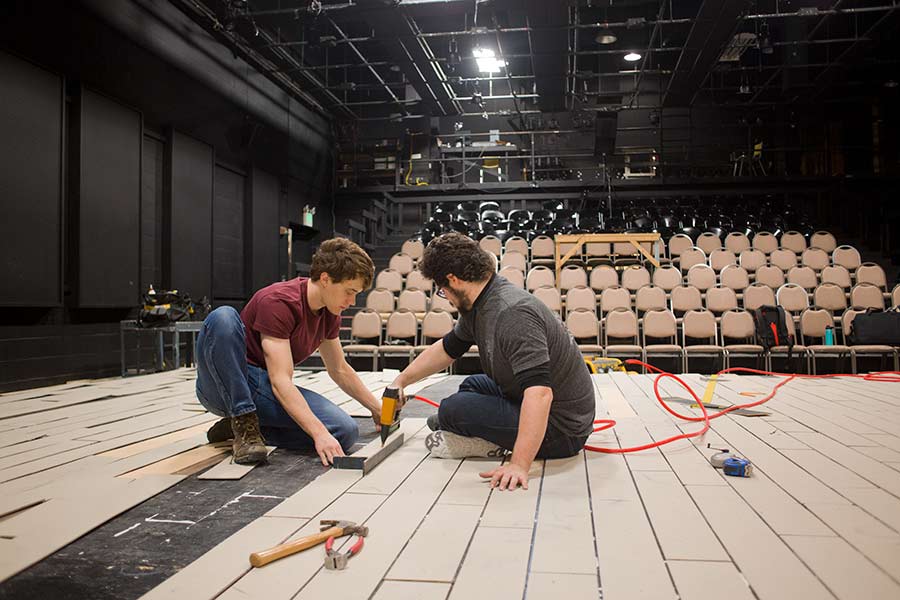 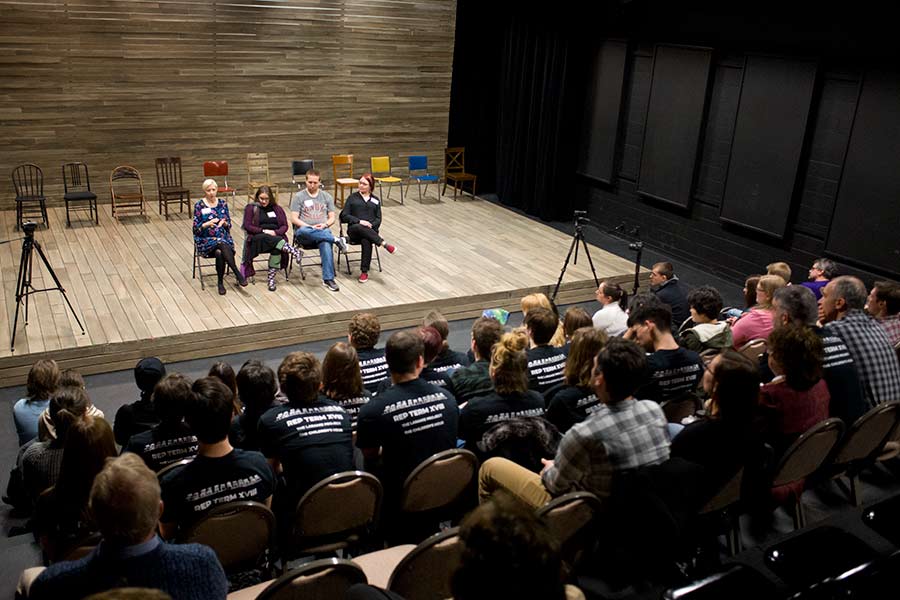 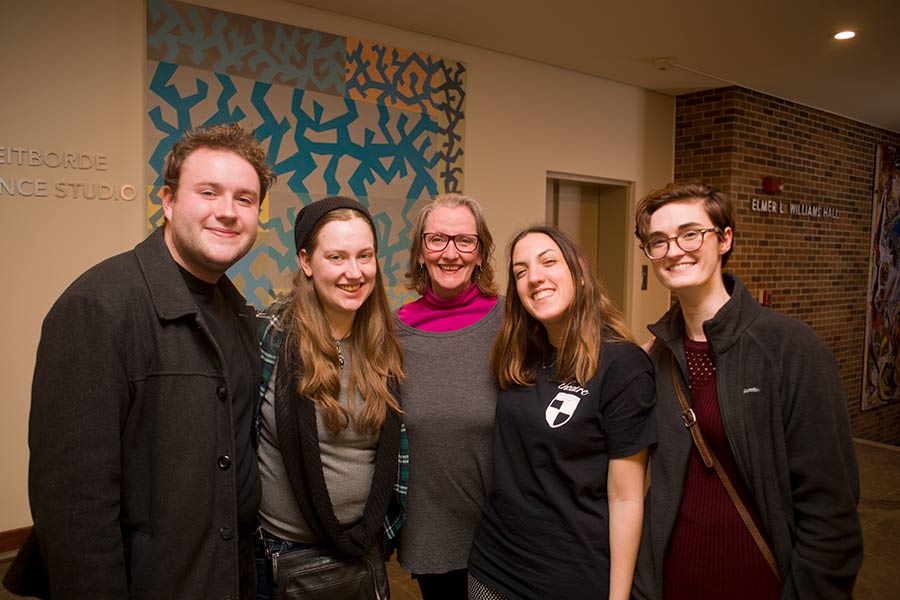 (Pictured above: a performance of The Children's Hour; students hard at work on the sets of The Laramie Project; a panel discussion with Knox Rep Term alumni; and a reception with alumni, faculty, and current students to celebrate Repertory Theatre Term.)

Olive Colangelo '20 came into Rep Term having recently developed an interest in lighting and sound design. She was cast in both and served as co-master electrician and sound designer for The Children’s Hour.

“I wanted a way to improve my knowledge and skills in both onstage and off-stage activities, and doing this every day for nine weeks certainly did that,” said Colangelo, who had only acted before Rep Term.

“Along with Jo Hill '20, I was responsible for fixing, circuiting, hanging lights, and making neat designs with them,” she added. “This was my first experience actually designing sound for a show, so I had to teach myself a lot of audio editing tricks.”

Senior Shannon Mindlin felt especially connected to The Children’s Hour. It was the first play she ever did in high school and the last faculty-directed show she was involved with in college. She played two character roles in the play and served as house manager for The Laramie Project.

Mindlin enjoyed being involved in Knox’s production as it was more than just a static period piece that was no longer relevant. “It put a modern spin on a play that seems to be so time-locked in its writing. We focused this production around the concept of lies spreading through social media and the idea that once something is on the internet, it can't go away,” she said.

Looking back at the term, Mindlin and Colangelo found that the theatre company grew together as the term progressed.

“I loved being in rehearsals and seeing each person grow as an actor onstage and as a theatre student backstage,” Mindlin said. “I was also able to watch people that might have not been given the position of leadership thrive and learn what it means to lead a crew.”

“The fact that we all took absolute responsibility for our individual jobs was crazy. We all knew why we were there, and we loved it,”  Colangelo added. “Even though it got a little stressful at times, it was so worth it.”

"Repertory Theatre Term at Knox is unlike any other collegiate repertory program in the country. I knew that I would be able to thrive and learn a lot from this experience." - Shannon Mindlin '19