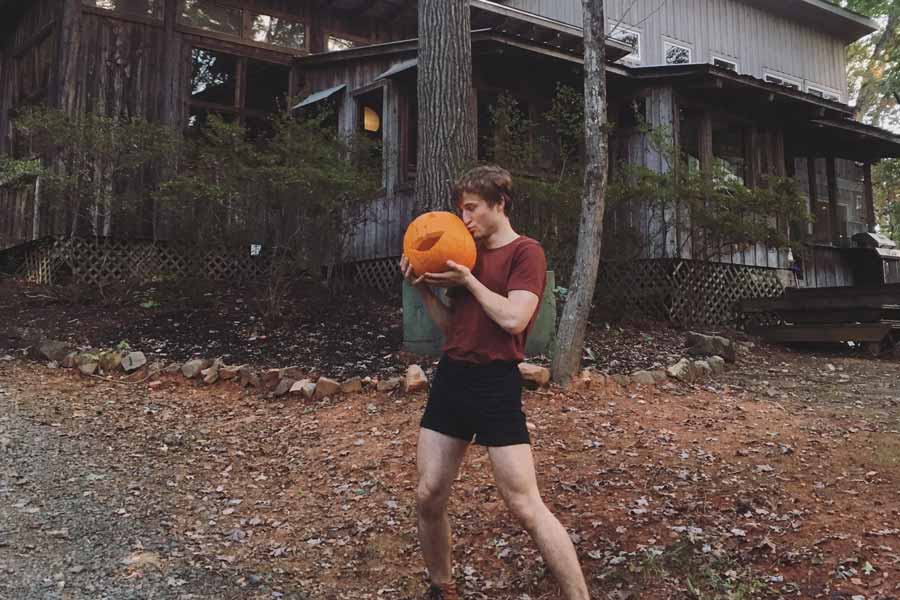 Josh Tvrdy '17 was making dinner when his roommate saw a tweet from poet Eduardo C. Corral congratulating Tvrdy on winning a 2021 Pushcart Prize for his poem “The Out-&-Proud Boy Passes the Baseball Boy,” originally published in Court Green.

Pushcart Prizes, awarded annually for excellence in the fields of poetry, fiction, and nonfiction, acknowledge writers who often are or become some of the most celebrated in their fields. Their work is published in an anthology each year.

“My initial thought was, ‘This is a mistake,’” Tvrdy recalled. But this disbelief immediately turned to gratitude. Other poets on the list, Tvrdy said, including “Ilya Kaminsky, Jane Hirshfield, Ted Kooser, and especially Frank Bidart, these are truly some of my first poetry crushes.... The fact that I'm going to have a poem that's bound with poems by those people—it's humbling and it's thrilling, it's flabbergasting. It's just joyful.”

Since graduating from Knox with a major in creative writing and a minor in religious studies, Tvrdy has won a fellowship to the Bucknell Seminar for Undergraduate Poets in 2017; won the 2018 Gulf Coast Poetry Prize for his poem “Churchboad Interrogations”; and recently completed an MFA in poetry from North Carolina State University, where he worked as a teaching assistant and won an Academy for American Poets Prize in 2019.

Reading is crucial to Tvrdy’s writing process, as his writing is fueled by access to “some silly scrap of language, words that just sound nice together that I throw onto the page and start molding into something.” His Pushcart-winning poem was inspired by his professor Dorianne Laux’s use of the word “heterosexually.”

Thematically, Tvrdy’s poetry often examines “a very fundamentalist evangelical Christian home, where any form of queerness—whether that be sexuality that is not heterosexual, any sort of gender play—is not only sinful, but something that brings a lot of shame to the family unit.”

Tvrdy did not begin writing about these themes and identities until he took Beginning Poetry with Knox Professor of English Gina Franco in the first term of his first year. “I walked into Gina Franco’s class and it changed my life,” he said.

“She would take these poems in class and slowly, methodically, graciously go through line by line and let the poems unfurl and let you see, as a young poet, that...all it takes is careful reading, which I think is a form of love. I loved going to that class. It lit something within me that has not gone out.”

Tvrdy also took inspiration from Franco’s connection to her faith: “[She] dispelled those notions of mine that I had as a emerging queer person that, if I’m queer, I cannot be religious, or I cannot believe in a divinity, or I cannot make art that wrangles with religion. But I think Gina was one of those first people that I realized, no, we are more spacious than that. There is room for both. And on a personal and poetic level that was so healing.”

Other English professors who greatly impacted Tvrdy were Monica Berlin (“who works so above and beyond to give her students community, to give her students a slice of her own very vibrant, dutiful writing life”), as well as Nicholas Regiacorte (“I think poetry just sort of radiates out of him”) and his course English Prosody, the study of meter and syllables’ weights in poems and prose.

Ultimately, Tvrdy said that the creative writing program at Knox taught him that reading “comes down to respect” and that “learning to stay silent sometimes and just listen, just try to understand, exercising our muscles in empathy and compassion and imagination, makes great poems but I think it also makes for vibrant friendships.”

Tvrdy said he realizes now that the creative writing program and its professors have “an attentiveness that is not reflected in the world. It's what the world should be, or could be, but it is rare.”

He said the Pushcart couldn’t have come at a better time: “The encouragement that a stranger, someone who you’ve never met, resonates with your work that often feels extremely private, sort of wrung from an interior life that you’re nervous about showing the world—it was just very encouraging and re-solidified the certainty that this is something I want to continue pursuing.”

"I walked into Gina Franco’s class and it changed my life." ⁠—Josh Tvrdy '17