Forget about Lincoln - Douglas; now the great debate is about an enigmatic architect and his Masonic symbolism 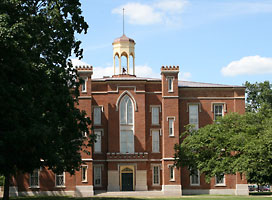 GALESBURG -- A new book explores the secret history and hidden symbols in one of the most important buildings in Illinois and United States history -- Old Main at Knox College. A National Historic Landmark and the only original building that remains from the Lincoln Douglas Debates, Old Main also has a secret Masonic history, according to "Chapel in the Sky: Knox College's Old Main and Its Masonic Architect," by Lance Factor, George A. Lawrence Professor of Philosophy at Knox College.

The book, released this month by Northern Illinois University Press, explores how in 1856 Old Main's architect, Charles Ulricson, secretly incorporated symbols from Freemasonry into the main campus building of a fervently anti-Masonic institution.

"Knox College was established by Christian missionaries who were vehemently opposed to all 'secret societies,' including Freemasonry -- they viewed it as a cult, a false religion," Factor says. "My book describes how the college's most famous building was designed and built by an architect, Charles Ulricson, who had been trained by Freemasons, and who incorporated Masonic ideas into both the design and the details, without telling his clients what he was doing." 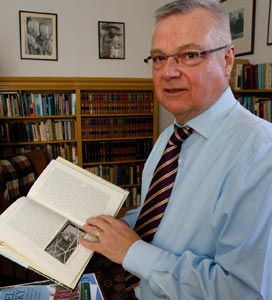 According to Factor, Old Main's design, geometry, windows, and interior decorations all show tell-tale signs of Freemasonry. "Ulricson essentially hid his Masonic symbols in plain sight of his clients, who were vigorously anti-Masonic," says Factor, who also discovered that College trustees appear to have been concerned only about the cost of the project.

Factor's book is based on more than five years of work, including precise measurements of Old Main and extensive archival research at Knox and in New York, where Ulricson worked after moving to the United States from Sweden.

Sweden to America: Ulricson, the enigmatic emigrant
Ulricson was born in 1816 to an elite family in Stockholm. "Ulricson's father was architect to the Swedish crown, which has been deeply linked to Freemasonry," Factor says. Ulricson emigrated to the United States in 1835 -- under mysterious circumstances, Factor says -- and worked as a draftsman at a prominent New York architectural firm.

"Ulricson was profoundly influenced by his work at Town and Davis in New York," Factor says. "Alexander Jackson Davis taught Ulricson that architects belonged to a 'sacred priesthood.' From Ithiel Town, Ulricson learned the secret doctrines of 'alchemical' or 'esoteric' architecture -- the idea that the form of a building could shape the characters of the people within. Alchemical architecture included a belief in a geometric version of the 'Philosopher's Stone,' a mythical substance that unified the four elements -- earth, air, fire and water. It also included techniques for drafting with a Masonic Cubit and for transforming buildings into talismans, which Freemasons believed carried the protective energy of the Divine Architect and Geometer of the Universe."

It's no secret: Knox in the 1800s hated Freemasonry 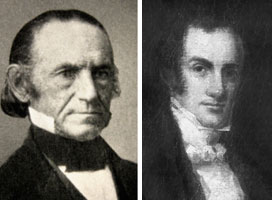 Knox College and the City of Galesburg were founded in 1837 by a group from upstate New York whose leaders were involved in a number of religious and social reform movements, and were openly hostile toward Freemasonry. The Reverend George Washington Gale, after whom the city was named, was a Congregationalist missionary who promoted the concept of "manual labor" to provide wider access to higher education. Gale and Knox's first president, Hiram Kellogg, were active in the anti-slavery movement, as was the second president, Jonathan Blanchard, who headed the college when Old Main was built. Blanchard later became the founding president of Wheaton College, ran for president of the United States on the Anti-Masonic Party, and wrote extensively for anti-Masonic publications.

"The founders of Knox College condemned Freemasonry and all secret societies as 'ungodly.' They would have viewed any kind of alchemical architecture as 'geomancy' or black magic," Factor says.

Why did Knox hire Ulricson? Factor explains: "Prior to the 1850s, Knox operated in a scattering of nondescript buildings on campus and in Galesburg. When the trustees set out to build a new 'main college building,' they first hired architects Olmsted and Nicholson of Chicago, but the Olmsted-Nicholson design was a monstrosity -- you can see for yourself, because there's a copy of the Olmsted-Nicholson plan in my book." The trustees then turned to Ulricson, who had moved to Peoria in the 1850s and designed buildings in Peoria and other cities in the area.

"The trustees probably learned of Ulricson through his design of the Hall of Records in Knoxville," Factor says. "Almost surely they were not aware of Ulricson's interests in esoteric geometry and alchemical architecture."

Ulricson was given free rein in the design and construction, Factor says. "Ulricson was not only the architect, he also was the general contractor, which means he hired all the subcontractors himself. He was an immigrant Swede who hired other immigrant Swedes. He didn't have to explain to any outsiders what he was doing."

The devil's in the details: Old Main's Masonic secrets 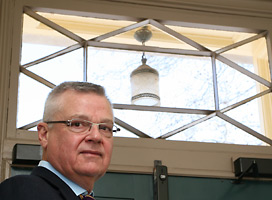 Masonic-inspired dimensions include Old Main's footprint -- 70 feet by 112 feet -- also known as the Golden Rectangle. "If Ulricson had wanted to protect himself from accusations of a Masonic influence, he could have changed the proportions by six inches, or a foot, and it would not look any different, but it would not have had the Masonic ratios."

Other Masonic-inspired details include dimensions traced by shadows across the south face at the summer solstice, and the design of the windows above the east and west entry doors -- transoms with 12 triangular panes around a central rectangle, an ancient talismanic pattern known as dodekatopoi. "These windows contain a secret message about the spiritual purpose of Old Main," Factor says.

Photos: Masonic ratios are found in the windows over the east and west doors, above, and in the proportions of other window panes in the building. 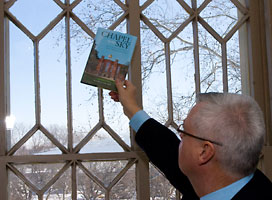 Factor's book also shows how Masonic numbers figure in the proportions of Old Main's exterior details, including the "Golden Rectangle" of approximately 1.6; the square root of five, approximately 2.2; and pi, approximately 3.1. Factor said that he found old photos of the original first floor hallway tiles -- removed during renovation in the 1930s -- that also show a Masonic pattern.

"All of these Masonic lessons found expression in Ulricson's hidden codes in Old Main," says Factor, who also has found Masonic symbols in another of Ulricson's projects, the Augustana Church in Andover, Illinois.

The Sealed Ledger
Factor says that he has also discovered that the college sought to conceal the cost of the Old Main project. "Even though Knox was a relatively wealthy college in the 1850s, there were economic problems that began in 1856 and culminated in the Panic of 1857 -- every bank in Illinois failed, and Knox's endowment was wiped out. The trustees didn't want to reveal how much they had paid Ulricson. In the expense book for 1856 -- stored in the Knox College Archives for the past 150 years -- the pages that record Ulricson's payment were, and still are, glued together. It's a sealed ledger."

Despite two earlier histories of Knox -- "They Broke the Prairie," written in 1937 by Earnest Elmo Calkins, and "Missionaries and Muckrakers, written in 1984 by Hermann Muelder, as well as work by a 1990 Knox graduate Gwen Lexow, who received College Honors for her research into the construction of Old Main -- Factor is the first researcher to report on the sealed ledger. He used a light-box to reveal what the trustees tried to hide -- that in the spring of 1856 Ulricson was paid some $50,000 for the project. 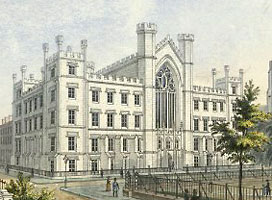 "Chapel in the Sky" includes illustrations of several of Old Main's influential predecessors, especially University Hall at New York University (illustration, right), built by Ulricson's mentor, Alexander Jackson Davis, in 1837 and demolished in 1890. Many of Ulricson's buildings -- as well as notable ones by Town and Davis -- are now lost to history, having been demolished, Factor says.

Like any great mystery, Factor says his book leaves questions unanswered. "Why did Ulricson and his brother abandon their family, contacts and inheritance in Sweden?" Factor asks. "How did Ulricson, an individual architect not working for any major firm, finance the construction of Old Main? And, where's the original cornerstone? It was found in the 1937 renovation and re-buried somewhere, but the location was not recorded."

Factor's book is "original and very informative," wrote reviewer Matthew Norman, a Knox College graduate and member of the history faculty at Gettysburg College. "His analysis is persuasive, well researched, and contains many new insights. I was very impressed with his ability to deconstruct Old Main's design and offer an entirely new way of examining and appreciating the building."

More than Masonic: Old Main's importance in the history of American architecture 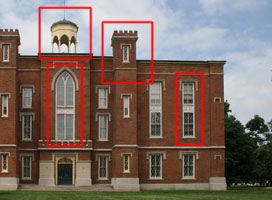 Factor's book goes beyond the Masonic connections to show Old Main's importance for American architecture. "Old Main is notable for the two-storey-tall vertical windows on all sides of the building -- creating the look of columns without actually using columns," Factor says. "They are known as Davisean windows, after Ulrison's mentor, Alexander Jackson Davis, who perfected the design and construction and must have imparted the knowledge to Ulricson. Early Davisean windows are very rare, and few examples exist outside of Old Main. They are the precursors of the vertical strip window in the modern skyscraper." Photo, right: Old Main's unique combination of styles -- Greek Revival bell tower, Gothic arch central window, Norman style battlement, column-like vertical 'Davisean' windows.

Factor says that he became interested in Old Main's architecture because it didn't fit into established categories. "Old Main has elements of Greek, Tudor-Gothic and Norman styles -- vertical windows that look like Greek columns, two massive Gothic arch windows, a bell tower that looks like a Greek temple, and Norman-style corner towers and battlements. But Old Main is not a jumble of styles -- it has a very rigorous geometry. Understanding Ulricson reveals a unique, unified design that has literally baffled observers from the very beginning." 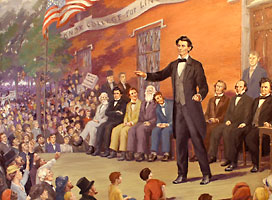 One year after its completion in 1857, Old Main hosted on October 7, 1858 one of the most famous debates in American history, between Abraham Lincoln and Stephen Douglas in their U.S. senatorial contest. The only original building that remains from the seven debate sites, Old Main was extensively renovated during the 1930s, when it became one of the first buildings in the country designated a National Historic Landmark. The first recorded storm damage occurred between completion and the Lincoln-Douglas Debate, when high winds blew out several windows in May 1858. In the 20th century, the roof and bell tower were repaired from wind damage in 1969, and the exterior was restored during the 1990s. The tower and bell were repaired again in 2001, when a time capsule from the 1969 renovation was discovered. The roof was repaired again, following a wind storm in 2007.

"The many successful renovations show the enduring strength of Ulricson's original design and construction," Factor says.

Factor has taught at Knox since 1969 and is currently the George A. Lawrence Distinguished Service Professor of Philosophy, chair of the department of philosophy, and director of the religious studies program. He teaches introductory and advanced courses in philosophy, including American philosophy, symbolic logic, philosophy of science, Greek philosophy, and environmental ethics, and he has won Knox's award for distinguished teaching, the Philip Green Wright-Lombard College Prize.

Factor has lectured widely on maps as works of art, and he is currently working on a book, "Philosophy and Cartography," which explains how philosophical ideas have shaped the production of ancient and modern maps. In 2006, an anonymous donor made a gift to Knox to endow the R. Lance Factor Chair in Philosophy -- the first endowed faculty chair in College history to recognize the accomplishment of a living professor.