Academic quality and affordability cited by The Princeton Review

Knox College is one of the nation's best values among undergraduate institutions, according to the new 2008 edition of "America's Best Value Colleges," released on April 24 by The Princeton Review. The guidebook said that it selected 165 colleges, based on "excellent academics, generous financial aid packages and/or relatively low costs of attendance."

"Knox offers both outstanding academics and educational value -- facts that are reflected in the ratings from Princeton Review and other guidebooks, as well," said Paul Steenis, Vice President for Enrollment and Dean of Admission. "We recommend that students get beyond the numbers by visiting Knox to 'rate' the college for themselves. You'll see what really happens with students and faculty, in class and across the campus."

The Princeton Review selected the schools for the book based on data it obtained from administrators at more than 650 colleges during the 2005-06 academic year, and its surveys of students attending the schools.

"We considered over 30 factors to identify our 'best value' colleges," said Robert Franek, vice president for publishing at The Princeton Review. The guidebook looked at academics; tuition, scholarships and grants; how colleges meet students' financial need; and student borrowing.

"The 90 public colleges and 75 private colleges we chose for this edition offer a terrific education, plus they have impressive records of meeting students' needs for financial aid," Franek said. "We highly recommend them as America's best college education deals for 2007."

The schools and accompanying data will be listed on-line, starting April 24, at The Princeton Review website, <www.PrincetonReview.com>. The book and website also provide information about applying for college and financial aid. The Princeton Review, which is not affiliated with Princeton University, publishes nearly 200 books on colleges, including the annual "Best 361 Colleges" and "Paying for College without Going Broke." 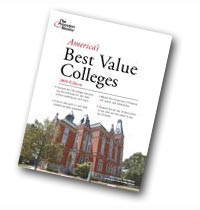