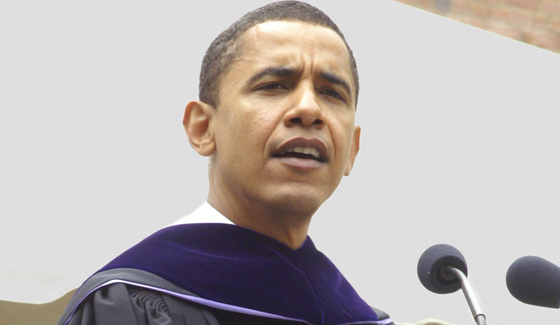 President Barack Obama will return to Knox College on Wednesday, July 24, to deliver an address on the nation's economy. The event will be in Memorial Gymnasium on the Knox campus, and doors open at 10 a.m.

This will represent his third visit to Knox, where he delivered the Commencement address and was awarded an honorary degree in June 2005. He also spoke at Knox in March 2004, shortly after winning the Democratic nomination to represent Illinois in the U.S. Senate, and outlined his political platform.

"We welcome President Obama back to Knox College and the Galesburg community. We are deeply honored that the President of the United States is returning to the Knox campus to deliver his message on the future of our country's economy," said Knox President Teresa Amott. 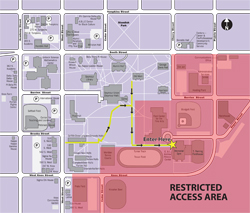 On Wednesday, July 24, the day of the speech, doors open at 10 a.m. Attendees will go through airport-like security and should bring as few personal items as possible. Parking will be extremely limited.

Anyone who cannot attend the speech in person may view it live at www.whitehouse.gov/live. All public tickets were distributed on July 22.

In his 2005 Commencement address, then-U.S. Senator Barack Obama spoke of the need for collective action in a global society, and he challenged the graduating seniors to ask themselves: "What will be my place in history?"

Themes first articulated in that address have resonated in many speeches over the last eight years, including at the 2012 Democratic National Convention and the President's second inaugural address. "We always go back" to the speech at Knox, Jon Favreau, former director of speechwriting at the White House, was quoted as saying in The Huffington Post.

Then-Senator Obama reminded the 2005 graduates that we have faced many challenges as a nation, noting, "America is a land of big dreamers and big hopes. . . . So let's dream. Instead of doing nothing or simply defending 20th century solutions, let's imagine together what we could do to give every American a fighting chance in the 21st century."

Shortly after delivering the Commencement address at Knox, Obama referred to that visit in Time magazine. His essay, "What I See in Lincoln's Eyes," appeared in the July 4, 2005, edition of the magazine, which focused on Abraham Lincoln. "I stood in view of the spot where Lincoln and Stephen Douglas held one of their famous debates during their race for the U.S. Senate," he wrote. "The only way for Lincoln to get onto the podium was to squeeze his lanky frame through a window, whereupon he reportedly remarked, ‘At last I have finally gone through college.'"

Knox College has a rich tradition of hosting visits by past, present, and future United States Presidents. They include Abraham Lincoln in 1860, Ronald Reagan in 1980, George H.W. Bush in 1988, and Bill Clinton in 2007.