Peacebuilding Conference Focuses on Serving Others 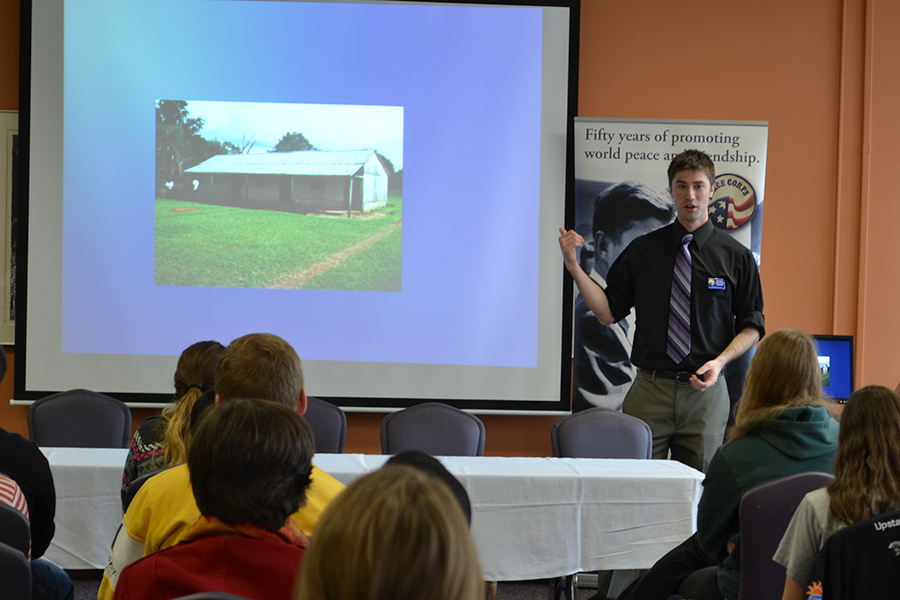 Knox College hosted a peacebuilding conference that featured a keynote address by a former Peace Corps acting director, an interactive workshop, and panel discussions with volunteers from the Peace Corps, AmeriCorps, and KnoxCorps.

By attending the April 12-13 conference, students "gained a much more nuanced understanding of the kinds of meaningful work they can perform after graduation," said Knox faculty member Robin Ragan, who organized the conference.

"For students wanting to give back to their communities, countries, or the world, they have great opportunities to do so and receive professional training along the way," added Ragan, director of Knox's Peace Corps Preparatory Program and associate professor of modern languages (Spanish).

"Students also heard many concrete examples of ways their peers served their communities: Service ranged from teaching English to building an eco-school, from creating a library to doing blood-sugar testing on migrant workers, from writing grants and fundraising to digging ditches."

The conference, "Work That Matters: Engaging the World After Knox College," was supported by the U.S. Institute of Peace's Public Education for Peacebuilding Support Initiative and by Knox's Eleanor Stellyes Center for Global Studies.

The two-day event, which was open to the public, attracted a mix of Knox students, faculty members, and other people, including visitors from Monmouth College, Bradley University, Western Illinois University, and Illinois State University.

In the keynote address, former Acting Director of the Peace Corps Jody Olsen explained the close relationship between storytelling and peacebuilding. (More information about her address is here.)

Here is a recap of the rest of the conference.

An interactive workshop explored the power of play as Sharon Mills from Play for Peace led the session with students from Knox and Bradley, as well as returned Peace Corps volunteers and Knox alumni.

"Play is a universal language," Mills said as she taught the group different problem-solving and trust games structured without winners and losers.

Mills works at Illinois State University and facilitates a Play for Peace group in Clinton, Illinois. Play for Peace is an international organization that teams up with individuals like Peace Corps volunteers to bring peacebuilding exercises through games to places around the world.

Jared Reynolds, a current Peace Corps volunteer, video-chatted with the group from where he is serving in Morocco, and he discussed the usefulness of the program within the Peace Corps.

"A lot of these activities transcend language," Reynolds said.

Celestina Agyekum '12, who graduated from Knox last year and has been teaching second grade in Chicago, will be headed to the west African country of Burkina Faso as a Peace Corps volunteer this year. She found the Play for Peace workshop helpful for her future plans.

"It helps to hear stories from other volunteers and get ideas," Agyekum said. "It makes me very excited to go."

Three of the conference's four panel discussions focused on the experiences of Knox alumni and students who have served -- or are now serving -- as volunteers in the Peace Corps, AmeriCorps, and KnoxCorps.

For example, Jeff Wozencraft '10 worked in youth group development while serving in the Peace Corps in Cape Verde. He started off teaching computer classes and later moved onto other projects, including managing a garden and co-founding a non-governmental organization for marine turtle protection.

Anna Dvorak '12 serves in AmeriCorps, working with middle-school youth in Wisconsin. Her projects include Girl Neighborhood Power, an empowerment program for girls in third through eighth grade.

As a member of KnoxCorps, Knox junior Max Potthoff works with the Cyclists of Galesburg and on sustainability issues. KnoxCorps provides a way to bring Knox College and the rest of the Galesburg community closer together, he said.

Knox alumni who spoke on the panels said they were eager to share their experiences with current students and other people who attended the peacebuilding conference.

"The minute I got the e-mail (about the conference), I was anxious to jump in and be a part of it," said Luke Karner '09. A returned Peace Corps volunteer who served in Honduras, he now works as a high school teacher and wrestling coach.

Mike Dooley '09, a returned Peace Corps volunteer who served in Paraguay, said that speaking at the conference was a chance for him to "give back a little bit" to Knox. At the same time, he said, it represented an opportunity for students to "hear from someone who's just been through the experience."

Students said they appreciated learning from the returned and current volunteers.

Celinda Davis, a Knox sophomore from Champaign, Illinois, said she attended the peacebuilding conference so she could find out more about opportunities to serve.

"I'm now so inspired that I'm going to look into AmeriCorps for after graduation," said Davis, who recently became president of Alpha Phi Omega, a co-ed community service organization. "Finding ways to build connections is important in an increasingly globalized, yet disconnected, world."

The fourth panel discussion featured three western Illinois residents -- all returned Peace Corps volunteers -- who spoke about the ways in which the Peace Corps influenced their careers after service.

An astronomy major in college, Schafer had expected to spend his career in relative isolation, he said. Because of the Peace Corps, he became interested in spreading "grass-roots, hands-on science" through public education. Political activism and community activism are other outgrowths of being a Peace Corps volunteer, said Schafer, a former Green Party candidate for U.S. Congress.

Knox junior Marie Anderson, from Pleasant Hill, California, said she enjoyed hearing from Schafer and his fellow panelists "about what you do when you come back" from Peace Corps service.

"Service has always been a huge part of my life," said Anderson, who is in the Peace Corps Prep Program. "For me, that's a very purposeful way of living."

"You have our gratitude for your commitment to international service and for the considerable contributions that Knox College graduates have made to the success of the Peace Corps," states part of the certificate, signed by Peace Corps Acting Director Carolyn Hessler-Radelet.

Merryman praised the program, saying it "has made a difference in so many people's lives."