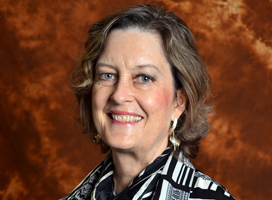 Knox College will host a peacebuilding conference on April 12-13 to mark the five-year anniversary of the Knox Peace Corps Preparatory Program. Titled "Work That Matters: Engaging the World After Knox," the event is free and open to the public.

Former Peace Corps Acting Director Jody Olsen, who was involved in the creation of Knox's Peace Corps Prep Program, will deliver the conference's keynote address at 7 p.m. Friday, April 12, in Kresge Recital Hall, Ford Center for the Fine Arts. The keynote address is titled, "Storytelling: A Key to Peacebuilding Locally and Globally."

A series of panel discussions on Saturday, April 13 will feature Knox College alumni and students serving in the Peace Corps, AmeriCorps, and KnoxCorps. Western Illinois residents who are former Peace Corps volunteers also will make a presentation about how their careers were influenced by the Peace Corps.

In addition, a two-hour workshop presented by Play for Peace will engage participants in peacebuilding exercises. The April 13 workshop will especially appeal to current and future educators. Space is limited for the free workshop, and registration is required.

Registration also is encouraged, but not required, for the entire conference.

Jody Olsen, now a visiting professor at the University of Maryland School of Social Work, started in the Peace Corps as a volunteer in Tunisia, where she taught English and developed community health programs. She moved up the ranks to country director, then to regional director, and, in 1989, to chief of staff, a position she held for three years. In 2002, Olsen was tapped by the president to be deputy director of the Peace Corps. She served as acting director in 2009.

Outside of the Peace Corps, she has served as senior vice president at the Academy for Educational Development, executive director of the Council for International Exchange of Scholars, and president of the University of Maryland Alumni Association.

The "Work That Matters" conference at Knox is supported by the Public Education for Peacebuilding Support initiative of the U.S. Institute of Peace (USIP) and Knox College's Stellyes Center for Global Studies.

"USIP is pleased to support organizations like Knox College and their contribution to the national conversation around international conflict -- and methods for resolving those conflicts nonviolently," USIP President Jim Marshall said.

Knox was the first college in the United States to offer its students an official Peace Corps Preparatory Program, designed to prepare students for the Peace Corps or other international service. The program includes coursework in international studies, education, and foreign language study, as well as a community service project or opportunity to study abroad.

USIP is the independent, nonpartisan conflict management center created by Congress to prevent and mitigate international conflict without resorting to violence. The institute works to save lives, increase the government's ability to deal with conflicts before they escalate, reduce government costs, and enhance national security. Headquartered in Washington, D.C., the institute also has offices in Baghdad, Iraq; and Kabul, Afghanistan.

As part of its congressional mandate, USIP devotes a portion of its budget to support organizations that will advance the field of conflict management by developing new techniques, establishing best practices, and professionalizing the field through education and training. The Public Education for Peacebuilding Support is a program of USIP administered by the Institute of International Education.

Founded in 1837, Knox College is a national liberal arts college in Galesburg, Illinois. Knox enrolls students from 48 states and U.S. territories and 51 countries. Knox's "Old Main" is a National Historic Landmark and the only building remaining from the 1858 Lincoln-Douglas debates.