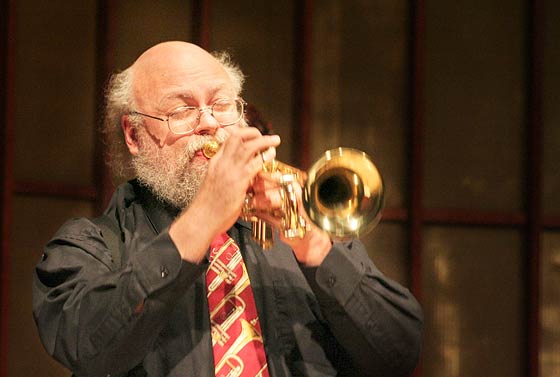 The first voices you hear on the latest CD by Knox College music faculty member and former Ray Charles trumpeter David Hoffman is a chorus of frogs, recorded in his own back yard.

"The tree frogs were singing one night, and I sat outside with a digital recorder," says Hoffman, who lives in a converted rural church near Speer, north of Peoria, Illinois. The CD, "Calmness of Spirit," features Hoffman on horn, piano and synthesizer, and Paul Adams on guitar, bass, flutes and percussion, recently won the Best New Age Album of 2010 from Independent Music Awards.

Hoffman says he created "Calmness of Spirit" as a relaxation project to benefit his wife Julia, who is a recovering cancer patient.

The opening track -- "The Singing Frogs of Guadeloupe" -- also features other natural sounds. "You can hear at least two types of frogs, crickets, and a coyote in the distance," Hoffman says. Other songs on the CD include the sounds of a passing thunderstorm and a train.

Hoffman says his goal is to "merge the sounds of the neighborhood with calming music, but in a different way than is standard. I feel like with much music of this type, the nature sounds are added on without really being a part of the music. What I wanted to do is to accompany the frogs, which took figuring out their general rhythm and key center." 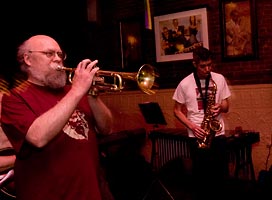 A member of the Knox faculty since 2004, Hoffman previously toured the world as trumpet soloist and arranger with the Ray Charles Orchestra. At Knox he teaches jazz trumpet and improvisation, has twice served as interim director of the Knox Jazz Ensemble, and often plays with Knox students and faculty at the weekly Jazz Night at McGillacuddy's in Galesburg .

Hoffman and Adams, his collaborator on "Calmness of the Spirit," perform in an experimental ensemble, The Neurons. Hoffman also serves as director of the Heartland Jazz Orchestra and president of the Peoria Federation of Musicians.

A native of Springfield, now living in Speer, Illinois, Hoffman began teaching trumpet at Knox in 2004. He also has twice served as interim director of the Knox Jazz Ensemble. How did Knox snag a man who took the stage thousands of times with Ray Charles, and has spent time with Dizzy Gillespie?

"I like the fact that it's a small school with very talented people," says Hoffman.

"Knox is incredibly lucky to have a faculty member who is a musician of unparalleled talent as a trumpeter, pianist, and composer," says Nikki Malley, instructor in music and director of the jazz program at Knox. Hoffman's experience with the Ray Charles Orchestra "gives Knox students insight into the business of music and the type of real-world skills necessary to build and sustain a career as a performer," Malley says.

"Dave is held in high regard by musicians throughout the country. He has a unique ability to teach students of all levels and really meet them where they are."

Hoffman loves the dedication of the school and its student body to the music program. "Not a lot of schools have weekly professional combo performances," he says. "The students learn a lot, having a four-hour gig each week."

Founded in 1837, Knox is a national liberal arts college in Galesburg, Illinois, with students from 48 states and 51 countries. Knox's "Old Main" is a National Historic Landmark and the only building remaining from the 1858 Lincoln-Douglas debates. 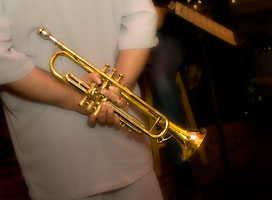