While the vast majority of traffic on the Underground Railroad was by foot or boat, Muelder concludes with a chapter that discusses how, starting in the mid-1850s, some fugitive slaves used the newly constructed rail lines to Chicago.

Muelder, who has extensively researched and lectured on the Underground Railroad, details the routes -- from Quincy to Princeton -- used by fugitive African-American slaves; how escaped slaves were assisted at several locations by white and black anti-slavery activists, as well as how they were pursued by slave-hunters and shunned by many white communities.

"For a long time, scholarship on the Underground Railroad in the Midwest focused mainly on Michigan, Indiana and Ohio," Muelder said. "The region that in the first half of the 1800s was called 'the West' -- Illinois, Iowa, Wisconsin, Minnesota and Nebraska -- was neglected."

Muelder's book emphasizes the central role of the founders of Galesburg and Knox College as "conductors" on the Underground Railroad in the region. "The activism of people like George Washington Gale and the College's first two presidents, Hiram Kellogg and Jonathan Blanchard, shows how strongly they believed that, even though slavery was legal, it was a sin and violated a higher moral law."

Rodney Davis, co-director of the Lincoln Studies Center at Knox College, credits Muelder with tracking down a number of first-hand accounts by Underground Railroad operators. "Because the Underground Railroad was a surreptitious and illegal enterprise, its previous study has been unsystematic and fragmentary," Davis wrote. "By bringing [earlier documents] back into print, Mr. Muelder is performing a most useful service for scholars and citizens."

Muelder only had to walk across the Knox campus to work with one of the most important sources -- the unpublished diary of local clergyman and Knox trustee Samuel G. Wright, preserved in the Archives and Special Collections in Knox's Seymour Library.

"Wright's diary tells when and how many escaped slaves he sheltered on his farm in Stark County during the 1840s and 50s. It is one of the most extensive written records from the Underground Railroad in the region, and one of the few that has contemporary numbers," Muelder said.

"Twenty-one [fugitive slaves] have passed through this settlement on their way to Canada," Wright wrote in his diary on February 6, 1843.

Muelder cites one historian's estimate that about two-thousand slaves a year may have escaped from the South -- a number consistent with Underground Railroad records from Illinois. "However, we will never know exactly how many fugitive slaves were aided by the Underground Railroad," Muelder says.

During his extensive travels through Western Illinois, Muelder took many of the location photographs in the book, while Galesburg artist Brenda Patterson drew several maps and illustrations.

The book cover features a modern photograph of the Phelps Barn near Elmwood in Peoria County, taken by Galesburg photographer and Knox College faculty member Michael Godsil, and an 1857 engraving that shows two fugitive slaves and three Underground Railroad operators held in a jail cell in Missouri, after having been arrested for attempting to help slaves escape to Illinois.

"The cover combines two of the most striking images that I've come across in my research," Muelder said. "The Phelps Barn still bears a cross-shaped cut-out at its peak that, when illuminated at night, was a signal that it was safe to bring fugitive slaves through the area. And the engraving illustrates the risks taken by both fugitive slaves and Underground Railroad operators in the cause of freedom."

Muelder is director of the Galesburg Colony Underground Railroad Freedom Center at Knox College, a Freedom Station Affiliate of the National Underground Railroad Freedom Center in Cincinnati. Muelder has been director of the Freedom Center at Knox since 2004, when he retired as the College's alumni director after working at Knox for 36 years. He earned a bachelor's degree in history at Knox in 1963 and a master's degree at Miami University of Ohio. His father, Hermann R. Muelder, was a renowned historian and Knox College faculty member whose 1959 book, "Fighters for Freedom," examines the religious, political and educational beliefs of the anti-slavery activists who founded Galesburg and Knox College. 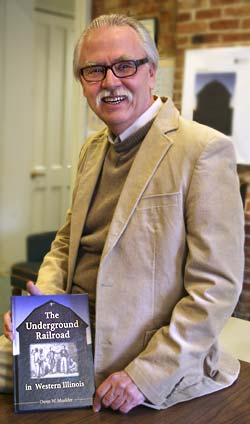