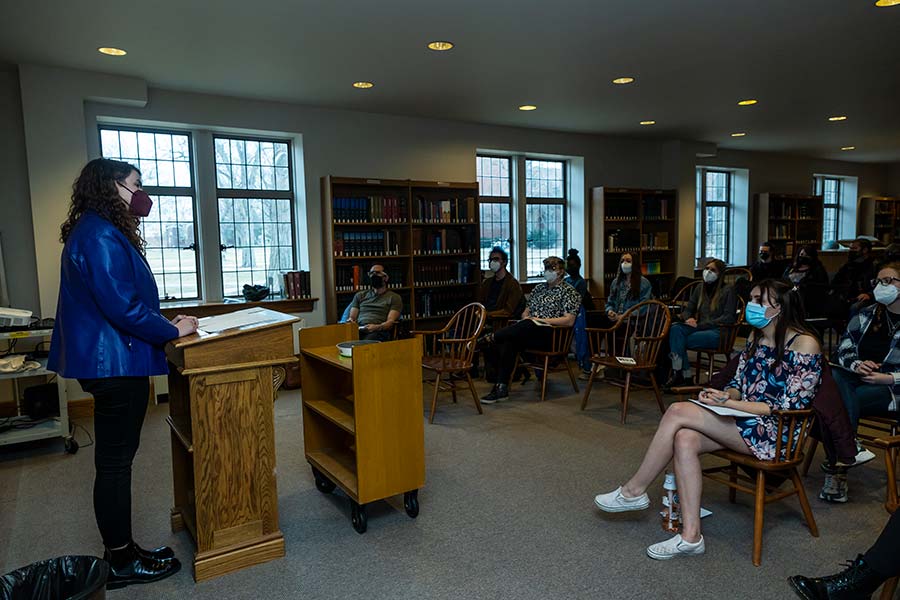 During their senior year, creative writing majors at Knox College gather to read their work for an audience composed of their friends, family, and Knox faculty. The tradition is called “Milk Route,” named after the job that local poet Carl Sandburg took at age 13. Sandburg left school early to help support his struggling family by delivering milk, which was his entry into the world. For many seniors, Milk Route is the first time they have presented their work to an audience, representing their own entry into the world as their time at Knox comes to an end.

“What's remarkable to me is that [Sandburg] was so young and emboldened to go out and help the family, and especially during an epidemic,” said Nick Regiacorte, director of the program in creative writing and associate professor of English. “He lost two brothers to it. He probably rolled his cart around places we all know. Milk Route represents that moment of setting forth.”

“Milk Route was a big moment for me,” said Liam Wholihan ’20. “I was a first-generation college student; I'm a first-generation graduate student now. When I showed up to Knox, [my dad] wasn't able to come with me. We couldn't afford it. So I showed up with a duffel bag that had all my personal possessions in it. I had no idea what Illinois was like, especially no idea what Galesburg would be like. I didn't know anybody. I did the first four years on my own, so when my dad got to come to Milk Route in my fourth year, it was this vindication of everything he'd given up so my brother and I could attempt to go to college.”

Milk Route was the first time Wholihan’s father had ever heard him read his work, which Wholihan says was his favorite part about Milk Route. Wholihan also said that along with his graduate school acceptance letters, Milk Route reminded him that he would get to continue writing after graduating from Knox.

The nature of Milk Route as this rite of passage into the larger world is significant to many students, including Sarah Carter ’20.

“I think it was such an important stepping stone to give me the confidence to share my own work since it was structured to come before portfolio, which is the final capstone for creative writing majors,” said Carter. For their final portfolio, creative writing majors compile a set of their best creative writing work displaying how they have grown and learned since their first year at Knox. It is also a representation of the end of the seniors’ time at Knox, as it is the last project they complete.

For Elizabeth Watkins ’22, Milk Route represented the beginning of the end of her time at Knox.

“After my reading, I felt the strangest mix of pride and sadness. I've come such a long way from where I started my first year, not only in terms of my artistry, but also personally,” she said. “Conversely, I also recognize that this occasion is an ending. As I leave Knox and head to graduate school, I know I am leaving behind so many wonderful faculty members and fellow writers that have provided me with the community necessary to develop creatively.”

These emotions were not the only effect Watkins felt. The speaking format of Milk Route also influenced how she revised the pieces she read.

“I tend to get a bit heady when it comes to poems, meaning that I sometimes forget that poetry is also an auditory experience. Having to practice reading my poems multiple times a day for a few weeks gave me the opportunity to get to know them more intimately and re-evaluate my choices,” Watkins said.

Milk Route is a deep-rooted tradition at Knox, much like the creative writing program itself. Several students, including Owen Hamlin ’22, fondly remembered the atmosphere of Monica Berlin’s studio, where students used to gather for Milk Route. In 2020, Milk Route took place before COVID-19 sent students home. In 2021 and 2022, Milk Route was presented virtually for the audience, but the writers gathered together in person to read their prepared pieces to the Zoom audience. With only their fellow writers in the room, most students agreed that the format had an effect on the spirit of Milk Route.

“I remember going to Milk Route my freshman year at Monica Berlin’s studio, and I loved the cozy atmosphere and comforting vibe,” Hamlin said. “The department really came together as a family, and while everyone is still striving towards that, at the end of the day, Zoom interrupts that atmosphere. It’s unfortunate when faculty and staff can’t come to see you in person and even more unfortunate when family and friends can’t either.”

Besides affecting the spirit of Milk Route, COVID-19 also affected the students themselves, and their work.

“It changed the nature of my work in a profound way,” said Erin Green ’22. “I went from a naive innocence quickly into a sort of paranoid desperation which has transformed over time into a sort of acceptance. While our spirit is still supportive, our work reflects, like the work of every artist, the times. To live through a pandemic as an artist, your work will be affected. While the ‘sort of acceptance’ has permeated all our beings, affecting our work, still we become used to the unfortunate situation of being subject to the constraints of technology. Zoom affects us all in some way or another.”

Despite the pandemic and its effects, the creative writing program has continued to flourish. The community of student writers is particularly supportive, several students mentioned.

“I still remember the faces of the students who encouraged me my first year. Then, the often touching and vulnerable writing of first-years as I began to support others in my sophomore year. The program has a sort of compassion-based umbrella effect in which authors support and encourage one another,” Green said.

Milk Route has maintained its meaning within the creative writing program, through its virtual stint and the uncertainty of a return to in-person events.

“Ultimately, it's hearing the words themselves that make Milk Route what it is, regardless of the way in which we receive them,” Watkins said. “The spirit of Milk Route lies within the great care that the faculty, students, and families take in setting aside time to acknowledge the hard work of our seniors; it's in the dedication of an hour or so to sit down and really appreciate the incredible artistry in what each of us has created during our time at Knox. In that regard, I would say that the spirit of Milk Route hasn't suffered at all.”