Knox College will award a 2007 honorary degree to Janet McKinley, Board Chair of Oxfam America, at the College's commencement exercises on Saturday, June 2.

"Janet McKinley has distinguished herself in business. Her current commitment to global economic development is exemplary," notes Roger Taylor, president of Knox College. "She has made a personal commitment to helping the world's poorest citizens make better lives for themselves and their communities. It will be an honor to make her a member of the Knox community."

During her more than 20 year career in the investment business, McKinley was a global portfolio manager and a director of Capital Research and Management Company, which manages mutual fund assets of close to $1-trillion. She was also chairman of The Income Fund of America, one of the ten largest equity funds in the United States. Prior to joining Capital in 1982, she was manager of Investor Relations and a financial analyst for International Paper Company.

In addition to her work with Oxfam America, she serves on the boards of the Deutsche Bank Microfinance Consortium and Micro-Credit Enterprises, along with co-chairing the program committee of Grameen Foundation USA. All these organizations target the provision of financial services to the world's poorest women.

McKinley earned her bachelor's degree in history at Smith College, where she was inducted into Phi Beta Kappa. She attended the New York University Graduate School of Business and received a Fulbright Fellowship to study at the University of Krakow, Poland.

40% of the people on our planet -- more than 2.5 billion -- now live in poverty, struggling to survive on less than $2 a day. Oxfam America is an international relief and development organization working to change that. Together with individuals and local groups in more than 120 countries, Oxfam saves lives, helps people overcome poverty, and fights for social justice. More information on Oxfam is available at www.oxfamamerica.org. 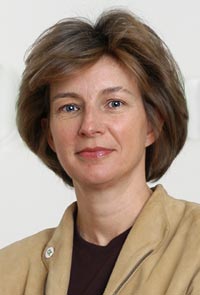