Honored for contributions to psychology; also selected to deliver conference keynote this fall

Frank McAndrew, Cornelia H. Dudley Professor of Psychology at Knox College, has been named a fellow of the Association for Psychological Science (APS). Fellow status is conferred by the APS on members who have made "sustained, outstanding contributions to the science of psychology in the areas of research, teaching, service, or application" of psychological research in business or industry.

"Being named a Fellow of the APS is a recognition that any psychologist would be honored to receive," said McAndrew, a noted researcher in evolutionary psychology and member of the Knox faculty since 1979.

The organization has selected fewer than 2,000 Fellows among its more than 18,000 members, most of whom work at academic and research institutions. The APS and the American Psychological Association are the two flagship professional organizations in psychology.

To Speak at International Conference
This fall, McAndrew will deliver the keynote address at an international conference on media research. The conference of the Interdepartmental Group for Research into the Arts, Media and Society (IDeoGRAMS), will be held September 14 and 15 at the University of Leicester in England. McAndrew's keynote, one of two at the conference, is titled "Information Age Media and Stone Age Minds: How the Entertainment Industry Succeeds by Pressing the Right Buttons in Our Hunter-Gatherer Brains."

McAndrew has published numerous works in environmental and evolutionary psychology, many of which have been co-authored with his students. He discussed his most recent research study, "Who do we tell, and whom do we tell on? Gossip as a strategy for status enhancement," in interviews with NBC's "Today" show, MSNBC, and many other media, while Jay Leno cracked a joke about the study on "The Tonight Show."

McAndrew received his bachelor's degree from King's College of Pennsylvania and his doctorate from the University of Maine. He has given lectures and presentations throughout the U.S. and internationally, and has served as a visiting professor at the University of Pretoria, South Africa. 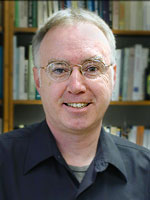