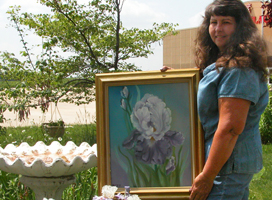 Becky Nott limps slightly from hip pain, walking the perimeters of the many flower beds that populate her thick-grassed backyard at Galesburg's Hollow Tree Apartments.

"When I moved in, this was all just grass," she says. That was last spring, and dozens of plant species had pushed their way through the rich brown top soil into the afternoon sun.

There are peonies and irises, African violets, orchids and birds of paradise. They span the yard in rounded beds. Blue eyed grass and pink and white columbines border a small pond by the back door. There are short Japanese maples bought at discount, wild strawberries and blueberries-enough to fill several buckets--and baskets hung in a low tree, growing cucumbers and tomatoes. Gardening has always been a passion for Becky Nott, but since the shutdown of the Maytag plant, it has also become her new career.

"I love my job at Lowe's," she says. "First time I've ever had a job that I enjoyed.

Becky began working in the garden department at Lowe's shortly after graduating with a degree as a medical secretary from Carl Sandburg College after Maytag closed. During the time she spent in school she realized gardening was always her first love. She also gets an employee discount for the plants she purchases for her garden, which is constantly growing and changing.

"I started gardening because-well a few years back my parents gave me some money for my birthday and I went out and bought a bird bath. I just kinda' went from there," she says.

Becky wears brightly colored clothes and has a voice that is gruff, with an accent that makes the word "wash" sound more like "warsh". A nearby patch of yellow daffodils nods lazily. An elaborate set of wind chimes clangs loudly by the apartment's back door. Variety is present in all aspects of Nott's life. It keeps her busy during times of boredom, and sane during times of strife.

"My biggest thing is beauty and art and flowers," she says.

Back inside, Becky's living room is pleasantly cluttered. Wallpaper flowers run along the walls near the ceiling, and brilliantly colored paintings of purple irises, pink peonies and blue orchids hang near the door and over a cabinet lined with potted plants waiting to be planted.

"I learned to paint from Bob Ross. You know, that joy of painting guy from TV."

There are bits of scripture on plaques hung about the room, and a sign over the kitchen sink says "Do I have to come down there?" a quote attributed to God.

"I'm a decent Christian and have a lot of faith in God. There've been times when I've been down to nothin' and he's pulled me out," she says.

Rebecca Nott has had a difficult life, but her outlook is so upbeat that you would never know it unless you asked. She has been married twice, and both marriages have ended tumultuously. For years she worked overtime at Maytag, sometimes taking second shift hours in order to support her children. Now it seems that all that is behind her. In many ways the plant's closing seems to have been a blessing in disguise for Becky. Her children have grown up and have children of their own. Where her time at home was once filled taking care of her young daughter's child while she finished school, or helping with her son's paper route, now Becky has time for herself.

Gardening, painting, and writing poetry and essays are the ways that Becky Nott spends her free time. She takes out a thick, green two-pocket folder full of writing.

"Sometimes if you can write something, you can get rid of it," she says.

Inside are poems comprised of couplets and wit, and essays reflecting on past challenges and the lessons she has learned. There is pain here, and humor; sheets of writing that capture life's harshest moments, meeting them head on with courage, optimism and laughter. Sitting down on the couch, she lights a cigarette.

"I got married young, at 19," Nott says. "I had kids and never really got out there in the real world. I really feel like I've made a lot of sacrifices for my kids."

Pictures of children and grandchildren stand at various angles all over Becky's living room. Her daughter has four children and lives in nearby Avon. Her son has two children who live in Hamilton.

Growing up, Becky lived on a farm in Avon. Her father was a farmer and her mother tended to pigs and chickens, as well as her four daughters. Becky's mother worked in a photography studio, painted, and edited and was the editor for the local paper, the Avon Sentinel.

"She wrote a column called Libby's news and views. She used to write about all the stuff that we did as kids. You know like different events. She might write about our 4H club going roller skating or sometimes it'd be politics or sometimes it was like ‘You'll never guess what Becky did today'," Nott says.

Becky's mother died in the winter of 2000. In an essay titled "Helpless," Becky describes the experience of caring for her ill mother in detail. But it was her mother's life, her vigor and strength that Becky models herself after. Before her mother died, money was tight for Becky. She could not longer afford upkeep on the house after the divorce, and was forced to sell it. She was still working at Maytag when she started digging up sod in the yard of the Hollow Tree Apartments, where she was planning to live.

They had started her out on the easier jobs in department 217, assembling small things and wiping out cabinets. Over her 16 year Maytag career she dabbled in just about every job they had, switching whenever she got bored or annoyed.

"The toll that that job took on my body is irreparable" she says. "When you're working you have to stand on the cabinet or walk beside it. I have pain in my hips and arthritis in my knees."

But there was also joy. She tells stories about joking with her coworkers; about the time they hid a supervisor's motor cart behind a pile of cardboard and laughed while they watched him try to find it. Working at Maytag changed Becky from the meeker person she was before to the unguarded person she is today.

"I got bolder and braver and more outspoken," she says. "And more assertive."

She puffs on her cigarette through turquoise fingernails, her skin is brown, weathered and freckled. This newfound boldness has carried over into present day. At Lowe's she has worked her way up from a seasonal position to an associate position. When the corporation revived its "pay-day pick" program, an employee of the month incentive program, Becky was the first to receive one.

In Becky's green writing folder is a letter to her grandchildren that she wrote when she was attending college at Carl Sandburg as part of her post-Maytag government sponsored retraining program.

"Somehow, I find myself in college," Becky's letter says. "I know how important it is to prepare for your future while you are still young. I hope you can learn from my mistakes and get your education now."

After graduation Becky started searching for a job as a medical secretary. She applied at St. Mary's hospital and was awaiting a callback, but because her unemployment checks were about to stop, she got seasonal work watering plants at Lowe's in order to make ends meet. 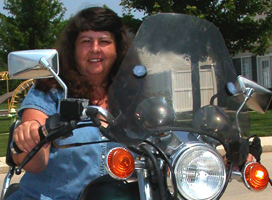 After an interview and a medical evaluation at St. Mary's, Becky expected to go in for orientation on a Monday, but on the previous Thursday they called and said the position had been filled. The management at Lowe's kept her on and made her a cashier and later an associate in the garden department, where she has been working ever since. That job turns out to fit her perfectly.

Outside Becky's apartment in the parking lot sits a Yamaha Virago motorcycle. It is purple and black in color, with a neon butterfly sticker on the tank where spilled gas has ruined the paint. Becky says that it needs a little work before she can ride it, but it looks in good shape.

"There were two goals I had in life that I have already accomplished," she wrote in her journal. "One was to have a motorcycle and the other was to surf in Hawaii."

Now Becky Nott has done both.