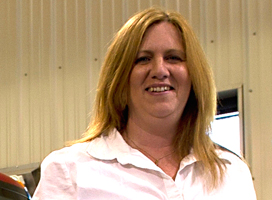 The sun hammers down on Galesburg and Melissa Bowling, 43, is running to Lowe's to buy a few gallons of paint for her office. The color the company picked at Alexis Fire Equipment Company, her employer, is a tame, dreary shade, and apparently not up to her standards.

"Earl Gray," she says, rolling her eyes to the heavens. "There's only a few windows in the place. We're all going to be falling asleep."

Her youngest daughter, Tara, 13, sits in the back seat of her maroon Chevy Impala, playing a Justin Bieber song on her cell phone. Bowling puts on a pair of black sunglasses as if these will help drown out the noise. The sunlight reflects off her strawberry blonde hair and the sides of this new accessory, which are covered in orange flame decals that match her steering wheel cover.

She laughs as she drives on, whistling at a classic car that passes by. "Nice, real nice," she remarks in her slightly drawling Iowan accent. This is a man's world and Bowling is ramming her way through it.

Once a bustling working class town, Galesburg now shows signs of decay. Where Bowling lives on the southeast part of town, one must travel under the viaduct near the Amtrak station, where the paved streets become cobblestone, a remnant of Galesburg's older and more prosperous days. Here the cobblestone is uneven and cracked. There is a boarded-up corner store a half block from her home, a beige two story house with chipped forest-green steps leading up to the front porch.

Bowling is inside. She is one of those 1,600 workers who were left without a job when the Maytag plant closed in rural Galesburg nearly six years ago. Bowling began working at Maytag in 1994. She stayed 10 years, until refrigerator production ended in September 2004 and 5 percent of Galesburg's workforce became unemployed with her.

By October of that year, employment in the city was at 9.1 percent. "When we got to work that morning, the line didn't start up," Bowling said, of the morning of Oct.11, 2002. That was the day that Maytag, the plant the town relied so heavily upon, told its workers the company was leaving them behind.

"[Managers] walked around and asked everybody to go to a certain area. Each department went to their own area," she said. "Our supervisors got up and they told us. Basically we were asked very nicely not to call second shift people that we knew and tell them. They said, ‘We want them to hear it from us so they can get their own information and ask their own questions so they don't get misinformation.' But, it was a shock. They told us and they paid us for the day and they sent us home." As for Bowling and her fellow Maytag employees, the change would not be easy. The announcement transformed their lives.

Bowling had signed up for classes at Carl Sandburg College (CSC) two weeks before the closing was made public. She tired of the factory life and was looking for a change in career and now, because of Maytag, she found it.

"After so many years watching engineers do what they do, I finally figured out what I wanted to do. I said, ‘I can do that.' I was thinking, you know, that I wanted to open up my possibilities," Bowling explained. "I just knew that I wanted more than what I had. At that point I was like, ‘I don't think I want to do this for the rest of my life.' It's like, OK, take a couple classes and see if I can handle going back to school." However, on that October day, Bowling feared she would never step foot inside of a classroom again. With no job to fund her studies, she would have to find a new job to support her family.

Luckily, the Maytag closing had one beacon of light, free tuition through a federal job retraining program at CSC. Bowling took a leap, going for an associate degree in machine drafting and design.

"I never would've thought of [this] if I hadn't worked at the factory. It was not anything that was ever even shown to me when I was in high school," she said. Counselors told her to try pursuing female orientated fields.

"They kept telling me, ‘It's a man's field, you don't belong there.' I knew that's what I wanted. Once I make up my mind that I'm going to do something, I will pretty much bend over backwards to get it done," said Bowling.

The degree eventually led to her current job at Alexis Fire, where she now creates designs for fire trucks to be sent around the country, using only a truck proposal and an AutoCAD (Computer-Aided Design) computer program.

"I take an idea from somebody else and I draw it up so that the guys who are making it can look at a plan and say, ‘OK, it's supposed to be this long, this big,' and they can take what I do and fabricate it. You could say I'm the middleman between the idea and the finished product," said Bowling.

Driving through Alexis, there is little chance one would miss Alexis Fire Equipment. A company that started as a four-man business now encompasses 55,000 square feet and nearly 100 workers. A finished fire truck glistens outside, a looming, sturdy figure, seemingly unaware of the hard labor it will soon endure.

Melissa works in the area above a small office where she is the only woman of out of about six fire truck designers. She sits at her desk, moving pieces of trucks from one window of her computer to another at a quick-fire pace. She writes measurements and figures on a piece of paper and checks off an extensive to-do list. "Well, this is it. This is my life," she says, never turning her eyes away from the screen.

"I have two brothers I lived with when I was growing up," she said, thinking of Burlington, Iowa, where she lived until she was 10. She graduated from high school in Biggsville, Illinois, where she had a keen interest in math.

"The father I had when I was in Biggsville worked in a factory too but he had his own shop. Worked on cars and things. I spent a lot of time out there in the garage with him," she said, where her interest in math united with a curiosity of the mechanical. Most especially, in vintage cars.

"I started (college) right out of high school but then I stopped," she said. "I got pregnant and had a miscarriage during the first six weeks of school. I missed almost a whole month of school. I got incompletes so I dropped."

Instead, Bowling became a mother. Her husband found a job at Maytag and she made extra money at home in Monmouth as a seamstress.

"He really didn't even want me to have a job. He wanted me to stay at home and do nothing. Keep the house. It wasn't me," said Bowling. To ease her discontent, she applied to Maytag in hopes of getting out of the house.

At Maytag, Bowling found companionship with her fellow employees and a way to support herself as well. "I wanted a way out of my marriage. And that was my way out," she realized afterward. At Maytag she ended up meeting her second husband and having, Tara, her younger child.

"There was one time when I was about eight months pregnant when I got hurt. I was working a side-by-side, installing ice makers in the fridges. I was reaching up like this," Bowling demonstrates, reaching her arm up to the ceiling, "and I passed out. I had pulled a muscle in my side. One guy pulled me out and called to the foreman. He got so scared. He thought I was in labor." Physical pain and accidents were not uncommon.

"It was commonplace out there for people to be in pain. It was quite normal for that type of factory. When you're doing things repetitively, you're gonna wear things out," she said, remarking that the recurring motions, using the same muscles and joints constantly, caused many employees to turn to painkillers to ease the constant hurt.

"There was probably a good three years in there I was on painkillers most of the time. It was very common," Bowling said. ""Vicodin, Darvocet were a lot of people's best friends."

The pain Bowling was forced to endure was one of the main motives for her signing up for college classes and leaving the factory life. She has gone through physical therapy several times for back issues as well as having a piece of her knee taken off by falling on the edge of a machine during the accident when she was pregnant with Tara. "That's one of the reasons I wanted out. I got tired of being in pain. Tired of hurting things, things tearing up," she said.

Upon returning to school after Maytag, Bowling also realized something new about herself. "I learned that I like to learn. Not something I would have ever admitted or realized when I was younger," she said. Since her degree required her to take coursework in a range of areas, it gave her options and a chance to see what was out there for her. She successfully completed a degree.

For three months, Bowling was unemployed after that. Applying for jobs was difficult, even with her newly earned education. Her experience was limited to her job at Maytag and her seamstress work.

While interviewing for her current job, supervisors asked why she should be chosen for the position. "I told ‘em, ‘Yeah, I was a factory worker and a seamstress, but I understand mechanics and I can take a two dimensional object and picture it in 3-D.'" And she was hired.

The salary at her job is comparable to that of Maytag. Even with a college degree, her wages only differ slightly from what the factory offered her over her 10 years of service.

"Most of us (former Maytag workers) have found that there are not very many jobs that are not in a factory that pay that well unless you have a college degree. I can have an associates degree and make pretty much the same amount of money as I made working in a factory. Difference is, I get to work in air conditioning now," Bowling joked.

"I have a chance for advancement now. Without the degree that's something I did not have. I do have my foot in the door." Bowling is now pursuing a full engineering degree at Western Illinois University.

"I love my job. Don't ever get me wrong. I love what I do. And I can't ever say that I'll necessarily find another job where I actually feel like I give so much. I've seen trucks come back that have been in use and some of ‘em come back very damaged from working on a fire. That truck saved somebody's life," Bowling said. "We had a truck leave and on its way to being delivered, there was an accident. This truck had already been loaded with all of its equipment. It was a rescue truck. They pulled some of the equipment out of this truck and cut the person out of the car. Saved their life. What I do, it may not be the best paying job in the world, but it has other benefits. If it's not designed right and it takes too long to get stuff out of a truck, that could cost somebody their life."