By Chris Mouzakitis, Class of 2010 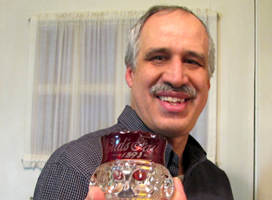 The plant that would shut its doors in 2004 as Maytag Manufacturing of Galesburg opened in 1904. Sixty-seven years earlier, John Eskridge's relatives moved to Knox County. In 1837, the Allens were among the first families joining George Washington Gale, a Presbyterian minister from New York State. This is Galesburg's equivalent of being on the Mayflower Compact, and something Eskridge, an amateur local historian, notes with appropriate pride.

In September 2004, Eskridge was among the 902 union workers who lost their jobs. He had worked on the door line of Maytag's top mount refrigerators, but he also had a side-job -- as an auctioneer -- that has since become the job which defines his life.

Eskridge has loved old antiques his entire life. Losing his job at Maytag allowed him to pursue his passion, something he says he considers himself lucky enough to support his family upon. His wife also works at the Galesburg Clinic.

Unlike many people -- census estimates have Galesburg losing thousands of people since 2000 -- he never considered leaving town. This is where his roots were, so he was one of the few who could look far back and see the cyclical economic history of this town.

"Like anywhere in the U.S., Galesburg and the county have seen their share of ups and downs in the last 100 plus years," he said. The lost job didn't darken the 1979 Galesburg High School graduate's outlook on life. And Eskridge also doesn't see Maytag's leaving as the death of Galesburg, the Midwest, or American manufacturing, as many in town do. And that belief, in fact, is reinforced by the modest new career he's now carved out for himself.

Maytag's closing allowed Eskridge to focus his efforts on the various side-careers he had while working there. He much prefers auctioneering and antique appraisal to installing trim and installation on 2,000 refrigerator units a day, the job he started at Maytag's Monmouth Boulevard plant on January 9, 1989. Because the American jobs were lost overseas, the plant's closing also got him a community college education paid for by the U.S. government, thanks to the North American Free Trade Act (NAFTA). He studied marketing and mid-management at Carl Sandburg College.

Those experiences inform his belief that Galesburg will rise again. What he terms the "cyclical nature" of history and his roots in Knox County reinforce it. While combining his own history, with the history of the city, and its once largest employer, Eskridge proudly tells of living in the 440 N. Prairie St. home belonging to the founders of Midwest Manufacturing, the company that would eventually become Maytag manufacturing.

At one point, more than 2,500 people worked there. Across the country, 700 similar plants, all owned by different companies, made refrigerators for America. After Whirlpool bought Maytag, four are still open today, said Eskridge, who with similar precision points out the many events that allowed what was originally a farm implement company to make what he thinks was America's finest refrigerator.

In between appraisal jobs on a Tuesday morning and watching CNBC in his living room, Eskridge says he believes Galesburg will rebound, even as the former Maytag plant has sat vacant for six years. The plant had previously continually been open for all but two years since 1900.

The plant opened in 1884 as the Coulter Disk Company, eventually turning to wooden refrigerators and other appliances under the Midwest Manufacturing facilities name. Admiral purchased the plant in 1950, and a series of mergers eventually led (in 1986) to Maytag and Magic Chef Products being produced at what was now the Galesburg Maytag plant.

His faith allowed him to say he wouldn't dissuade his only son, a student at Galesburg High School, to pursue a career in manufacturing.

"Every generation has their time," said Eskridge, in the quick-paced voice that wouldn't, and doesn't, sound out of place at an auction. "My mother worked at Gale products when they closed (in the 1980s), while my great-grandfather lost his farm in the Depression. It's different circumstances and different ways, but every generation has something they have to go through like this. It's how they come out of it that makes the difference."

Because he can't imagine leaving Galesburg, Eskridge can't see how the city won't attract more employers to fill the gap left by Maytag and numerous other manufacturers leaving. He admits his optimism is colored by the fact he just "fell into" the Maytag job, unlike many in town for whom it seemed like their only hope of a stable life. In fact, his working life began with auctions.

Eskridge's beginnings on the door line sprung from a friend and supervisor at Maytag who approached him at an antique store about working there during one of the big hires. In 1989, Maytag began officially producing Maytag refrigerators. Previously the plant had been manufacturing the appliances under the Magic Chef and Admiral names.

"He walked up to me and handed me an application and before I knew it, I was working on the door line," said Eskridge. He admits he'll miss the pension increases he was on his way to earning, but otherwise he said the loss of the job didn't break his family's bank account.

The thought of a secure pension coupled with the chance his appraisal and auctioneer work could fade out lured and kept him at Maytag.

Eskridge now works on an as-needed basis, appraising furniture and other items for the Galesburg Antiques Mall and individuals throughout the community.

His clean but packed home is filled with finds from those jobs, from a heavy wood-framed mirror to the thick-upholstered chair he sits in while watching CNBC.

Eskridge spends hours every Sunday working as an auctioneer in a Galesburg furniture store. He sells items ranging from rare coins to the less glamorous old toaster ovens "in need of a new heating element" and a collection of hotel room watercolors.

Auction regulars -- and most people appear to be regulars -- greet him personally, and often interrupt him to comment on their items, telling him how the lawn mower engine is from a unit never used and how the set of fireplace irons "have never seen the heat."

Many in the crowd don't agree with Eskridge's assessment of Galesburg rising again, but can join him in saying that the corporation's leaving was "simple greed."

Although he went to school, he didn't end up with a job in the area in which he trained. He did gain confidence, though, from his new college education.

In 2006, a sciatic nerve problem almost delayed his graduation from Carl Sandburg College. The pain was so acute that couldn't stand to sit in a chair and instead had to lie on the floor as his marketing teacher lectured. He didn't miss a class.

Although he can't say the degree directly led to his employment -- he'd worked as an auctioneer before Maytag and Sandburg -- in 2007 Eskridge graduated from Sandburg radiant in his cap and gown.