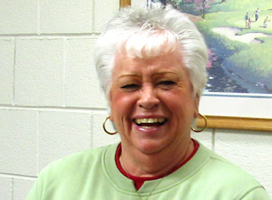 Give Barrie Schaffer a call on her cell phone, and you'll be greeted by the strains of "Don't Stop Believin'" by Journey. It feels like a particularly fitting choice. As one of the 902 union employees laid off from the Galesburg Maytag Refrigeration plant when it closed in September 2004, Barrie had to make some big changes.

Along with about 250 others, she elected to go back to school at Carl Sandburg College under a government program. When you're approaching 60 years old, that isn't easy.

"I'll be the one with white hair in a Vegas shirt," she said, a description that turned out was all that was needed. She is a woman of medium height, with short, white hair laced with spray and a plethora of jewelry. A knee replacement last summer still gives her difficulties getting around. She says she's on the way to the gym, but has on a remarkable amount of makeup considering.

"I always put on makeup," she later said, "even to go to the factory."

Barrie was born May 22, 1946, in Abingdon, which she left after the sixth grade to follow her father on his military duty. She has lived in Britain, Italy and Hawaii throughout her life, but she's now been back in Abingdon for 35 years.

Thirty years ago, nearly everybody with a job there had it at one of the area's factories. Butler Manufacturing, Admiral Corporation (which was bought out in turn by Magic Chef and Maytag), and Gale Products Division of Outboard Marine Corporation, Barrie said,  were always hiring. And then came that time when they were gone.

Barrie married in 1964 at the age of 18, had her first child, then divorced four years later. She needed a job and ended up at Gale Products making outboard motors. It was a good, stable job -- a union employee working at Gale pulled in $14 an hour, on average, but foreshadowing the fate of Maytag, Gale closed in 1984.

"I was tending bar sometimes, at Duffy's," she explained about how she ended up at Maytag after Gale. "There was some big shot from Maytag who would come in sometimes. He said I should apply, and he'd make sure I got in. So I did."

According to Schaffer, there were 500 other former Gale transplants. Those like Barrie, who stuck it out until Maytag closed, would be there for the next 21 years.

Work at Maytag, like most factory jobs, was difficult. Barrie stood on the line for hours at a time, assembling side by side refrigerators. Aches and pains were commonplace at the plant, especially in knees and hands -- both of which endured constant use. Workers would share tips and methods with each other to help ease these discomforts, whether by covering frequently hurt areas, like fingers, with some kind of homemade protection or simply keeping a big jar of painkillers at home.

Barrie's job on the line varied. Supervisors moved them around frequently. For the most part, Barrie put in shelves on the side-by-side refrigeration line. But the line moved fast, making things hard.

"Sometimes I would let a few go by," Barrie said. "That's the only way I could keep up."

Although she doesn't mention participating, employees would take breaks sneaking drinks in the parking lot or sparking joints in the loading dock. Working day in, day out with the same people made being on the line a bit like being in a family, and those connections still hold strong today. Spending that much time on the line, helping each other out, finding methods to cope with the menial work, and talking about everything, led to a bond with both the people and even the factory itself.

Then came the day the employees were told Maytag would be closing. "They brought us all into a big room, and a guy, you know, got up on the podium and told us we were closing in two years, in 2004. That was 2002. At least they were decent enough to tell us, you know," Barrie said. "It was a very sad day in my life. There were grown men crying." They were all in for a messy transition. No one was certain about the future.

"All we ever knew in this area was blue collar," explained Rose, owner of Duffy's Tavern and Barrie's lifelong friend, one day. "Back then, you could throw a stone and hit a job."

"She struggled while going to school," Rose said. "Life's better now, but she struggled, especially financially."

Barrie and her coworkers were offered two options when the plant shut its doors in 2004: job hunting or going back to school. The Trade Act of 2002 was passed as a tag along to the North Atlantic Free Trade Agreement (NAFTA), which allowed Maytag to move to Mexico. Included in the Trade Act were services and aid for workers displaced by a company moving.

The Galesburg Works provided services to around 1,850 dislocated workers and their families. Some 885 workers took advantage of vocational training opportunities, including 75 to 80 percent from Maytag, 10 percent from Butler and the rest from other companies who had shut down.

Of those who took advantage of training, roughly 60 to 65 percent completed it. Every two weeks, those enrolled in school had to get a paper signed by their professors in order to get their unemployment checks. But the money, frequently, wasn't enough. And Barrie says her age made things even more difficult, especially once her unemployment ran out.

"I had to work. Some of these girls work all day then go to school at night," she said. "I was too old for that."

Maytag's retirement package only applied to people who had been at the plant for at least 15 years and were 60 years old. Barrie would have to wait. In the meantime, she discovered she couldn't actually finish her Carl Sandburg College associate degree.

"It was hard, going back to school," she said, "but I liked it. I was getting A's and B's. I was on the Dean's List and everything."

She was enrolled in the early childhood program with the intention of becoming an elementary school teacher. After TRA retraining money ran out, Barrie was getting by only on unemployment, still trying to finish her degree. In her final term, the college required 40 hours a week of internship or community service -- something she could not afford to do without a source of income. So, with the finish line in sight, she had to quit school and find a job fast. Her new job is at Warren Achievement Center in Monmouth, Illinois, a non-profit home for the mentally disabled.

"They just love me there," she said. She works part-time as a house mother of sorts, cleaning, cooking, and helping the residents.

Shortly after that, however, her daughter Kelli died. "That's why my house is full of flowers," Barrie said one day. "From the funeral. She was diagnosed in December. When we decided to bring her home, they gave us two weeks and she made it ten days. She was a police dispatcher in Galesburg, so they gave her the whole parade and everything. Everybody came out."

Barrie has only recently returned to work. "They gave me two months," she said. "Now, if was at a factory, they'd give me three days."

The time off isn't the only benefit. "I don't know if I could have taught [school]," Barrie said. "This [job] is much easier. Some of the girls complain about how hard this job is. I tell them, 'You don't know what hard is!'"

But while it is easier on the body than the factory, the hours can be grueling. She is called in frequently and usually ends up working more than 40 hours a week. At least the work is rewarding, though. "You make a bond with the residents," Barrie said. "And after Kelli passed, my boss was always calling."

Barrie is still fighting her grief. She's back at work and back with the friends who supported her.