One-third say that they have no health insurance; others with insurance say it costs more now 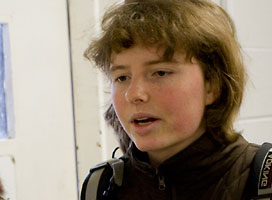 GALESBURG -- Of the 122 former employees who responded to the health questions on the Maytag Workers in Transition survey, 49 percent reported a health problem they believe is related to their factory work.

"It takes its toll," Dave Bevard, the former president of the International Association of Machinists and Aerospace Workers (IAMAW), said of factory work. "You buy your ticket you take the ride. It's not that people didn't know some of that going in but there were a lot of things they didn't buy when they went into it either."

In October of 2001, Spring McBride needed surgery to fix a heart problem. She was still working at Maytag and covered by the company's health insurance plan. The insurance paid nearly $86,000 dollars for her operation while her share of the bill was about $200. Like most people at Maytag, she considered her insurance to be good.

Employees were able to add their spouses and children to their coverage. But since the closing, 29 percent of all former workers have had to go without health insurance and the number of family members covered under any insurance has narrowed. Of those who still have health insurance, either through Whirlpool, which now owns Maytag, or by another means, 48 percent think their quality of insurance is the same, while 38 percent think it's worse than when they worked at Maytag.

McBride was among those who qualified to keep her insurance, having worked at the plant for more than 30 years. The "30 and out" clause allowed employees to retire after 30 years of service and qualify for the company's health insurance until the age of 62 when Medicare is available.

She is still on the company's health insurance but the costs have increased from $12 to $15 a month while working at Maytag to $218.83 a month she pays now. Moreover, former employees say that every year the premium rates change, as does the amount the insured person must pay for prescriptions.

"Three dollars a week is much easier than $218 a month especially when you're not making anything because you're on a budget," McBride said. "It was easier because it came out every week and I didn't worry about it."

Always changing
The changeability makes it doubly hard. "Every year it changes and I never get a notice saying how much it increases and I always have to call them and find out," McBride said. "It would be nice if they'd tell me how much it increases, so I have it ready for my budget."

According to Bevard, the health insurance rates started to change because of a court ruling in 2005 by a Federal Bankruptcy Court in Chicago granted to United Airlines.

"The court rulings didn't actually involve us, but it set precedent (for companies to be allowed to alter their insurance rates)," Bevard said.

In 2006 Bevard's wife Pat, who also worked at the plant, was diagnosed with lung cancer. By that time the insurance had changed so that the policyholder had to pay 20 percent of the prescription cost. When Pat Bevard went through chemotherapy, there was a drug she had to take once a week that cost $4,280 a dose. The Bevards had to pay 20 percent of the cost, or $850 a week for that one drug.

"Insurance became paramount," Bevard said. "(The question became) where am I going to work so I can get insurance? We were able to do pick up jobs. What I call contract jobs."

Bevard found various jobs working for the AFL-CIO and he now works for the Illinois Federation of Teachers. He was able to afford their health insurance as well as the Whirlpool insurance. The Bevards made an enormous effort to pay for both because of the uncertainty of Pat Bevard's condition and the rates under the Whirlpool plan, called Healthscope. That plan changed its policy again for 2011 but its recipients did not know the cost as of this past November.

In addition to the monthly rate changes, the deductible costs on the new plan increased. McBride and the Bevards are among the lucky, however, since they still manage to get the medical care they need.

Delaying medical care
Since the plant closing, 47 percent of the survey respondents said they have delayed seeking medical help when ill. Either they no longer had coverage and couldn't afford medical help, or their coverage was too feeble for them to afford to pay their own or their family's medical bills.

One survey respondent who did not want her name used wrote about how her son, who also worked for Maytag, struggled after the closing to raise two daughters on his own, go to school, and pay for healthcare costs without insurance.

"He sacrificed his health and had a heart attack at age 29 in his car on his way to school because he had Hypertrophic cardiomyopathy (HCM) and couldn't afford his heart medication and pay his rent and feed his girls."

He was afraid to miss school to see a doctor because his unemployment would be docked, she said.

Another respondent, Michael Iaun, 51, worked at Maytag for 16 years and didn't qualify for Maytag's health insurance when the plant closed since he didn't work there for 30 years. "Unless you're working at a factory making that kind of money, you couldn't afford it anyway," said Iaun, who found a solution only in being covered by his wife's insurance plan, available from her job.

Karen Kistler, 58, worked at Maytag for 21 years and was the Environmental Engineer at the plant since 1987. She also didn't qualify to stay on the health insurance plan, and was not provided insurance under the contract job she's held at the facility since managing the property. She was uninsured for two years after the plant closed until she qualified for insurance through her master's program at the University of Iowa. She will be searching for health insurance again when she's no longer eligible for the university program's health plan.

Kenneth Lockwood, 57, worked at Maytag for 30 years and received a full pension and eligibility for the Maytag health insurance. Nonetheless, Lockwood had to drop the insurance when the rates increased after the plant closed. He was laid off last December from a job that provided some health insurance. Relying only on his pension for a monthly income for him and his wife, Lockwood is unable to pay the $580 to $600 monthly that the Healthscope insurance would cost for them both.

Neither Lockwood nor Kistler had any serious health problems while uninsured, but "it was a worry because you never know when something may occur that you need hospitalization or procedures done that could cause you to essentially lose everything you got," Kistler said. "I was just lucky and didn't have that happen."

Coverage rated high
Health and insurance benefits were the third item that survey respondents listed as missing most since they lost their Maytag jobs. First, people missed their Maytag friends and sense of community. Next they missed job security, but Maytag was considered a good job because of all three: the benefits, job security, and the family orientation the facility had.

"I was happy working at Maytag," Lockwood said. "If you asked my wife she would have said I was married to my job." But that job also came with a certain degree of stress.

Lockwood worked 60 to 100 hours a week at Maytag. McBride and Lockwood both said overtime increased when Maytag took over from Admiral, which had owned the plant before. Lockwood often worked a double shift, which was from 7 a.m. to 3:30 p.m. and from 4 p.m. to 12:30 a.m. There were two half hour lunches and two 15 minute breaks, a total of an hour and a half the worker wasn't getting paid.

"A couple of times during an overtime shift I felt like the walls were closing in on me," Lockwood said. "I said, ‘I just can't take it today.' The foremen said go home." Lockwood explains, "You're getting four hours of sleep. Your mind is so drained." But as he, McBride, and Iaun all said, overtime was where you made your money.

Iaun found the stress level to be very high, saying, "If the lines were down for a half hour, heads will fly. That was the name of the game, never shut the line off -- you get your finger mashed, whatever. There was always problems with the product being messed up, everything was cranked up all the time, you couldn't make the boss happy."

"When you work like that and you're muscles are under continuous bombardment everyday plus they're working us every other Saturday too, oh man by Sunday you pretty much lay around and your body starts gaining consciousness," Iaun said. "And then Monday it's right back to the grind."

Since the factory closed, nearly a third of the survey respondents, or 32 percent, have dealt with depression.

"Most people I knew out at the factory I don't see anymore," Lockwood said. "A lot of it was saying ‘hi' as you're coming into the door. You just lose contact with everyone. Every once and a while you'll see someone at the grocery store."

McBride and Iaun both view the closing as a good thing because they were challenged to retrain.

But one big plus now is that they find their new jobs less strenuous on their health.

A closer look at former employee health
Overall, respondents to the survey rated their current health at an eight on a scale of one to 10, compared to a nine while working at the now-shuttered factory.

For some, financial woes were expounded by a combination of a lack of health insurance and ailments that require long-term care.