While others learn to create their own ‘Dream' 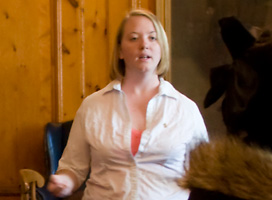 GALESBURG -- Russell Koerner worked at the Maytag Refrigeration Plant for more than 30 years and has already tasted success.

"I am very appreciative to Maytag for giving me the chance to work for them," the 55-year-old said. "I was able to live the ‘American Dream' because of my employment. I can't say I could be any more grateful for my life during my Maytag years or my time now. I am truly blessed."

When the plant closed in 2004, Koerner retired on a full pension of $1,600 a month from Maytag, which is currently supplemented by his salary as a delivery driver, a job he was able to get not long after the plant shutdown. Living well on his Maytag salary and leaving with what is known as "30 and out," meaning that after putting in his 30 years in the plastics department and on the line, he has enough money to do what he wants now and live with a financial cushion.

That is not the case for the majority of laid-off Maytag employees. Most feel betrayed not only by the closing of the plant, but by the entire promise of the "American Dream." What that "Dream" is, however, wasn't defined.

Some sociologists suggest it means a lifetime of loyalty will pay off with a good and decent life, and a reliable pension after working for 30 years. Respondents in this survey didn't say what it was that made them feel betrayed but the feelings they had were strong.

"Thanks Maytag, for nothing," wrote one former employee on a returned Maytag Employees in Transition survey. This man had put in more than nine years and for that, he said he got almost nothing but decent pay for those years. Now, he is working in management at a local pub, making significantly less than he did at Maytag.

And yet, this man's simple statement neatly sums up the feelings of anger and betrayal many former Maytag employees feel, even six years later.

Data collected reveals some depressing trends. Some 84 percent of respondents believe that the "American Dream" is now out of reach for U.S. manufacturing workers; 57 percent believe it is permanently out of their own reach; and 65 percent feel betrayed by the concept of the "American Dream" they grew up believing in.

One woman, 52, who worked at Maytag for more than 27 years, wrote: "Between the two of us (the respondent and her husband) we had spent nearly 60 years working for two companies (that) we believed we would retire from." Although she retrained at Carl Sandburg College in phlebotomy, the pay in that field was not what she expected. She now works full-time in retail management.

Like her, many believed they would retire from Maytag after the 30-year mark. They believed the company they were devoted to, that they took pride in, would not abandon them.

"There was a sense of pride we put into each refrigerator. In the end, it didn't matter because the higher-ups in the company got greedy and we all suffered," wrote another woman, age 50, who put in 15 years at Maytag.

Another man, age 52, who worked at Maytag for 16 years, wrote: "Since leaving Maytag my wife and I struggle to pay all our bills. We have had to put off going to get regular medical and dental care and I have not seen an optometrist since I left Maytag because we can't afford new glasses for me."

When Maytag closed, many were left without health insurance, including medical, dental and vision. Although a pension from Maytag would have ensured many a decent income, and possibly insurance, of the 133 people who answered the survey sent to 425 of the 902 workers laid off in September 2004, only 102 people left with any sort of pension. Just 35 of those left with a full 30-year pension.

The results comparing the remaining two variables were less dramatic.

Also, younger workers who are making more and are satisfied with their jobs now still feel betrayed at least 52 percent of them.

When asked whether they believe that the "American Dream" is permanently out of their own reach, more than half of respondents (57 percent) agreed it was. The largest dividing factor is job satisfaction: of those dissatisfied with their current job, 79 percent believe the "Dream" to be out of their reach. Comparatively, only 48 percent of those currently satisfied with their job say that is true for them.

Adapting to the ‘Dream'

In addition, these attitudes have national implications. Stretching across gender, age, education and income boundaries, over 80 percent of every category of respondents here believe that the "American Dream" is out of reach for manufacturing workers in the United States.

On the other hand, 52 percent of all respondents feel the "American Dream" is still possible for those who adapt. Americans seem to believe in second chances.

Further, respondents believe it is up to the individual to do the adapting, as many believe that loyalty to one company is no longer an option. Some 83 percent of survey respondents said you can't count on working for just one company during your lifetime anymore. "It's sad, but it seems that way," wrote Koerner.

For others, however, the loss of their job at Maytag has finally allowed them to begin to live their own "American Dreams." 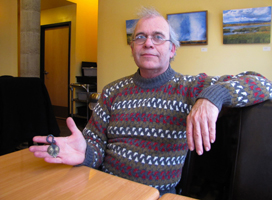 Allen Ortery, 52, worked at Maytag for 28 years. Although he didn't get a full pension when the plant closed, he said he feels he is now better off than while he was at Maytag. He describes his "Dream" as "the freedom to go out and do what you want to do."

Ortery is now a blacksmith, after spending nine months in North Carolina as part of a retraining program. Trained as a blacksmith, he said he has the opportunity to go to work every day and do a job he loves. Despite making less, he is happier.

"I had grown to hate the job (at Maytag)," he said. Now, he works full-time (although seasonally) as a blacksmith, mostly for the state.

Another woman, 48, who worked at Maytag for 23 years, and retrained after the closing, wrote: "I have moved forward with my life and have new friends that build me up and encourage me in my new career. I only hope and pray others are feeling as good about their new lives as I am. I know it was a tremendous loss for many. Life is what you make it!"

Overall, this sense of optimism is pervasive among two groups: those who currently have similar or higher incomes as their time at Maytag, and those who, like Ortery, may be making less but are happier with their new jobs.

Spring E. McBride, 57, who also worked at Maytag for over 30 years, is lucky enough to be one of those former workers with a pension. After being laid off, she started her own lawn care business.

"Maytag really did a lot of its workers a favor by shutting down the Galesburg plant," she said. "It forced a lot of us to make decision that most of us were afraid to make, to start all over in perhaps a better job. The better job being: more pay for what you did, less stress for you, your own business and your own hours or just being happy at what you are doing."

What's next for American manufacturing workers? For those who love their jobs, like Ortery and McBride, or those who have retired, the road might be a little easier. But it isn't quite so easy for those who loved their time at Maytag, but are now stuck in a low-paying or unpleasant job without the promise of the pension they had expected.

And for now, many are just surviving and hoping: "I wish Maytag was back. I miss the financial security and the people. I wish there was a way to bring it back. Closing this factory has ruined a lot of people's lives," wrote one woman, 44, who worked at Maytag for nine years.

Others are keeping their sense of optimism alive. One man polished off his survey with a simple sentence: "When life hands you lemons," he said, "you can't always make lemonade. But you can learn to adapt."