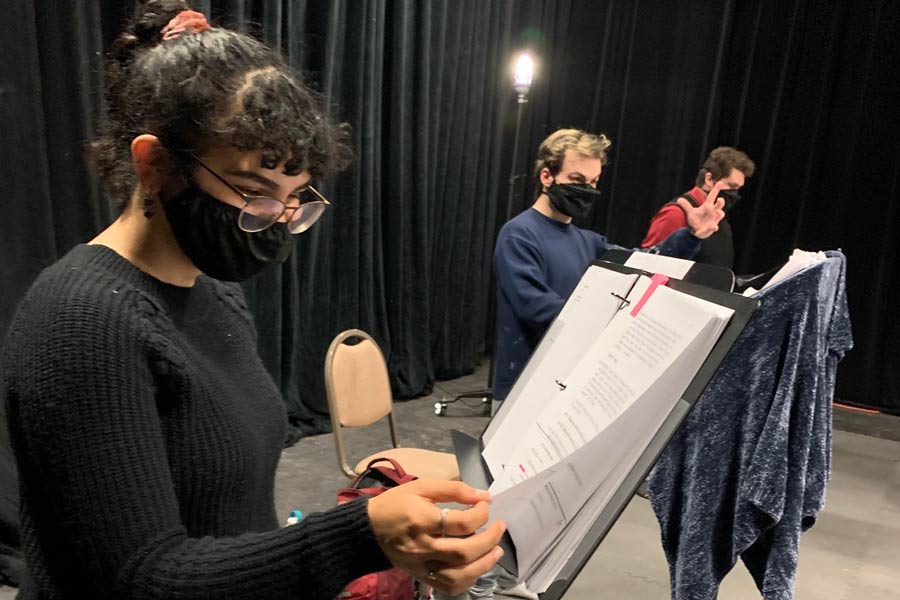 Teaching and learning amid a pandemic are inspiring Knox faculty and students to achieve new levels of creativity. The Department of Theatre, for instance, is reviving an old form of performance, the radio play, for its presentation on Halloween weekend of Dracula! The Radio Play by Philip Grecian.

The play will be aired on three Galesburg-area radio stations, and the broadcasts can be heard on a radio or online. Audiences can tune in at 6 p.m. Thursday, October 29, on WGIL, at 8 p.m. Friday, October 30, on Tri-States Public Radio, and at 7:30 p.m. Saturday, October 31, on the Knox College student-run station, WVKC.

The production is directed by Elizabeth Carlin Metz, Smith V. Brand Distinguished Chair of Theatre. Carlin Metz notes that as soon as spring 2020’s live productions were canceled due to the pandemic, the theatre faculty began to discuss how to plan for the coming year. “I opted for the fall slot and decided that since it included Halloween, why not do something relative to that weekend. Though there are other plays adapted from other tales of horror, this was the first radio play I came across. As it is designed for radio, and we have a radio station, I thought, ‘Perfect!’”

Dracula! was scripted in the style of old-time radio dramas that actors performed live over the air with studio audiences from the 1930s to the 1950s.

One of the challenges of performing a radio play is acting through voice alone, and the cast of Dracula! has risen to the challenge. “You don't have affect or gesture to fill in understanding on the part of the listener,” Carlin Metz explained. “The actors have learned a lot about how to put all of the nuances of acting into the voice alone.”

Elise Hanson '22, who is stage-managing the production, added, “Our focus has been mostly on developing dialect and working with the actors on what the consequences are of each line they say.”

“Socially distanced, we were able to work with the actors in person and with each other, which was incredibly important as they got to know each other and build their characters’ relationships," Hanson continued. "Developing this production has been strange because of the absence of the importance of physicality and the emphasis on sound, but Liz's experience coaching dialect helped both myself and the cast build our skills on working with our voices.”

Hanson, who has previous experience as a stage manager, said this production has turned out to be much more complex than she originally thought.

“On the surface, it seems like less work, as there is no prop tracking or blocking notes, but because of the heavy emphasis on sound, my assistant had much more work than I originally intended in terms of note-taking,” she said. “I have had to take line notes [before], but that focus was on when actors miss a line or stumble—for Dracula!, they're on book [reading their lines], so I had to listen for inflection shifts, pauses, and learn how to write out how some words should sound in different accents. Working with a bigger cast was also an interesting challenge. While there was a bit of one-on-one work, it was a new experience to see how Liz coordinated four-plus actors at once in a given scene and how to give each of them [the] attention and critique required.”

Carlin Metz said that Dracula! was the right fit for many reasons. “I didn't find any other adaptations of horror stories before I needed to make a choice. I also thought that the audience's familiarity with the tale would be fun. And its running time is under 90 minutes, which will be good for audiences who want to go trick-or-treating or relax and eat candy afterward!”

Learn more about theatre at Knox.

Photo at the top of the page: Amira Siddique as Birdie, Nicodemus Baron as Dr. Van Helsing, and Andrew Tucker as Williams rehearse Dracula! The Radio Play. Photo below: Sebastiano Masi portrays Count Dracula in the play. Photos courtesy of Elizabeth Carlin Metz. 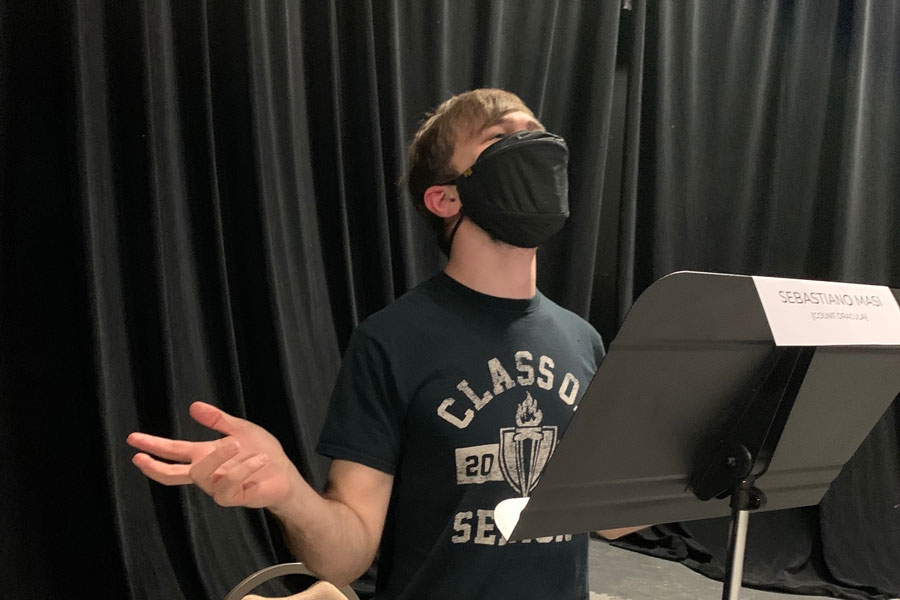 Full cast and crew listed below.