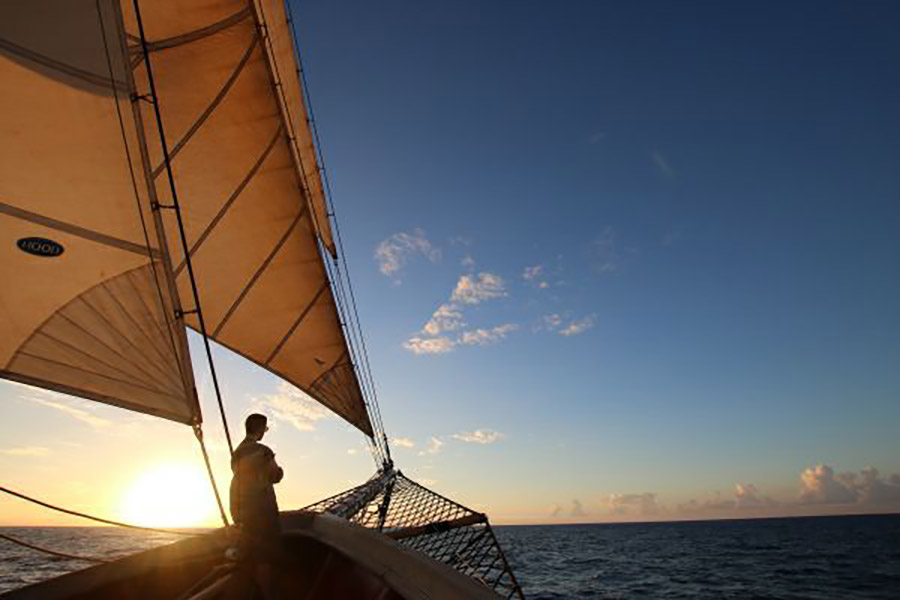 Egan and Fitzgerald are enrolled in SEA Semester, a 12-week program where students take classes and conduct research while living aboard a ship. The experience is one of more than 90 different locations worldwide where Knox College offers opportunities for students to study off campus.

During their semester, titled "Colonization to Conservation in the Caribbean," students conduct snorkel-based coral reef surveys and marine mammal surveys.

"I thought it would be interesting to study the concept of sustainability from a completely different perspective," said Egan. "Living on a 136-foot schooner for six weeks also seemed like a fun yet challenging experience. A different culture forms within such a small space. You'd be surprised how much you learn about sailing in just a few weeks."

Egan has a variety of tasks on The SSV Corwith Cramer that he shares with his fellow students, including navigation, standing watch, processing oceanographic samples, and participating in round-the-clock operations under the guidance of professional mariners and oceanographers.

While abroad, the students study natural history illustration and scientific journaling. They must chronicle their voyage through field sketches, technical diagrams, scientific data records, personal accounts, and stories as a part of the experience. 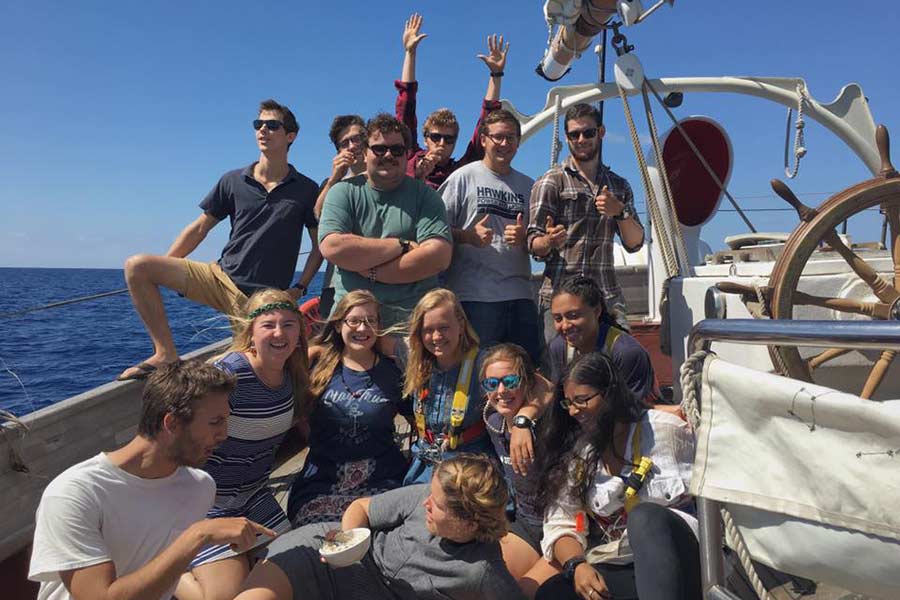 Pictured aboard the SSV Corwith Cramer are, standing, Will Fitzgerald '17 (third from left) and James Egan '18 (sixth from left).

"For the last 15 years, the lionfish has been messing with reef ecosystems from Florida to Dominica," Egan explained. "Most places will have either a bounty or a growing market for lionfish. I'm currently trying to find out who exactly has the resources to deal with the invasion and if the general populace is benefitting from these management methods."

Tracing their voyage, the ship started at St. Croix in the U.S. Virgin Islands, then traveled down to Portsmouth in Dominica and to Samana in the Dominican Republic. They then sailed to Port Antonio in Jamaica and Santiago, Cuba, before making their way back up to Florida.

"The winds and seas were fairly unpredictable and I was surprised at how quickly we worked together as a crew to get us in safely. Living on a ship really gives you a sense of why the sea has always been seen as this mysterious, atavistic landscape."

One of his most memorable moments happened while he was on bow watch, getting ready for a shift turnover. Before he left, the tail of a huge humpback whale flopped about 50 meters from the starboard bow.

"It was really awesome to witness such a huge creature up close," he said.

Egan says that the experience has been fun, but challenging. "The program has forced me to think on my feet at random intervals. You'd be surprised at how many times I would have to leave the lab to haul away on lines. It's no cruise, but it's an experience I'm sure I won't forget."

At Knox, half of all students study abroad. The College offers support for these opportunities through a $2,000 Power of Experience Grant.