Knox Students Make Their Mark on the 2020 Election 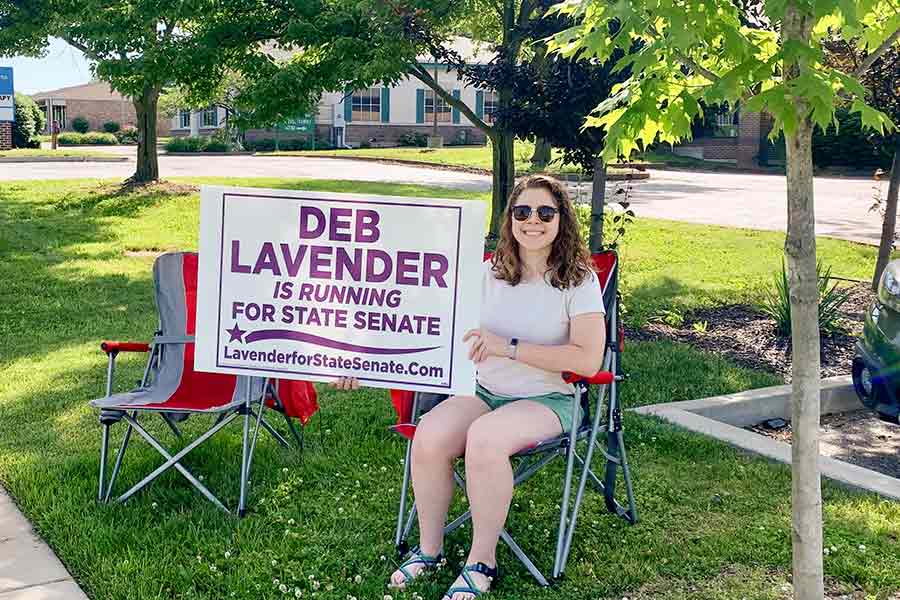 While it would have been difficult to find a single Knox student not glued to their phone, laptop, or TV on election night as returns started coming in, three Knox students had a particularly professional interest in the outcome.

One of those students, Clare Hensley ’21, spent election night glued to a little TV with her housemates in Jazz House. But unlike the TV pundits who gave their near-undivided attention to the presidential election, her eyes were fixed on a local race: more specifically, a state senate election in St. Louis County, Missouri.

That’s because Hensley was the digital manager for Deb Lavender's 2020 campaign for Missouri’s state senate district 15: responsible for managing all social media pages, the campaign’s email blasts, and the campaign website. “This was the first campaign I’ve worked on where I wasn’t in town on Election Day,” Hensley said. “If there wasn’t a pandemic, I probably would have driven home to be with the rest of the team, but I wanted to make sure that I was keeping both my campaign team and my housemates here at Knox safe.”

Hensley described this election as a critical moment due to the pandemic: unparalleled by previous election cycles. Changing the government’s response to the pandemic—especially in her home state of Missouri—motivated her work on the campaign. “Missouri’s overall response to the coronavirus is that there is no response,” Hensley said. “As such, there is always a worry that I may get it the next time I go to Target or the grocery store. I may be young enough where I have a good chance of recovering when I get it, but the same might not be said for the rest of my family.”

“When working on a campaign, because of the temporary but high-stakes environment, the campaign is your life,” she said. Even still, Hensley was accustomed to this kind of pressure before she joined the 2020 campaign trail, having served during the 2016 and 2018 elections as a paid canvasser and an intern to the campaign staff, respectively. “When I came back to Knox, I had to make sure to set boundaries around when I was doing campaign work and when I was doing school work,” she said. “Some days, there wasn’t anything pressing for the campaign, so I was able to be more lax on that end. Some days, we needed a big project turned around as soon as possible, so I had to put off school work if it wasn’t due early the next day.”

Hensley recalled feeling a lot of anxiety on Election Day; even with the campaign nearly over, she still had a lot of work to do. “I was fielding FaceTime calls from my field manager all day and was constantly checking our opponent’s social media,” she said. “I was also making sure that our team was putting out important updates on wait times in St. Louis County. This year, voters in the county were able to cast their ballot at any polling place, not just their usual precinct. So if lines were long in one place, they could go elsewhere.”

Making sure that these polling places follow guidelines and run efficiently is no easy task. Tyrese Reed ’21 was part of this process on Election Day. From 5:30 a.m. to 7:30 p.m., Reed served as an election judge, monitoring a Galesburg polling location and helping residents cast their ballots. “I did the primaries in California back in 2016, and I think it is important for people to vote and exercise their rights,” Reed said. “I knew that this year I wanted to make sure I was in a similar position to help the people of Galesburg and my peers.”

Reed took pride in his participation with this election: both as an election judge and as a first-time voter on the national stage. However, Election Day was not without its complications; Reed recalled two particularly difficult moments in his 14-hour shift: once, when a local resident accused the election judges of voter suppression, while another gave up on voting altogether due to confusion about his polling location. “This goes to show that people need to do their part to be informed,” Reed said. “All votes matter, and people should not give up on their votes.”

Despite these adverse encounters, Reed emphasized keeping faith in the democratic process: in particular, the role that young people play in that process. “I learned that helping educate the youth will lead them to vote, because they are indeed motivated and want to participate,” Reed said. “The fact that the youth and upcoming generation is more open minded keeps me hopeful. It will allow for better coalition building and activism for human rights. They just need that push.”

Likewise, Matthew Nevin ’22 agreed that Knox had a profound impact on his political values and involvement. Nevin spent the majority of fall term in West Virginia as an intern for Democratic challenger Paula Jean Swearengin’s senatorial campaign. As a part of the campaign’s field department, Nevin was responsible for helping set up town halls and other campaign events, logging requests for yard signs, making phone calls to potential voters, and conducting in-person engagement with voters across the state.

For Nevin, the 2020 election was about national identity: what does it mean to be an American, and what are Americans willing to do to help others. “This election took place in a pandemic and at the height of a civil rights-based movement—one in the 21st century that was brought to the forefront because of systemic racism,” he said. “I don't want to sit idly by and let things fall where they may for my community, ones like it, and especially for the communities unlike mine that I've had the privilege of being introduced to at Knox.”

Nevin described how small, homogenous communities—like the one he grew up in— often have limited exposure and diversity, which can in turn shape how people perceive the issues facing the country. “I always thought I was open-minded, but Knox has shown me I was far from it,” he said. “I become more and more informed each day. It's something I hope to take with me back home and open the minds of my community members.”

As for Hensley, she ended up watching her candidate lose a close race to the incumbent on election night. Even still, the experience left her feeling hopeful about the direction of the country, and her role to play in that prospect. “I would say that sometimes it’s not about who wins an election, but rather connecting to the community in a meaningful way,” she said. “We received so many thankful comments and well wishes after our loss that made the work feel worthwhile.”

Students in Spanish 205 assisted Russell Coon '08 by translating a company's contract language from English to Spanish.