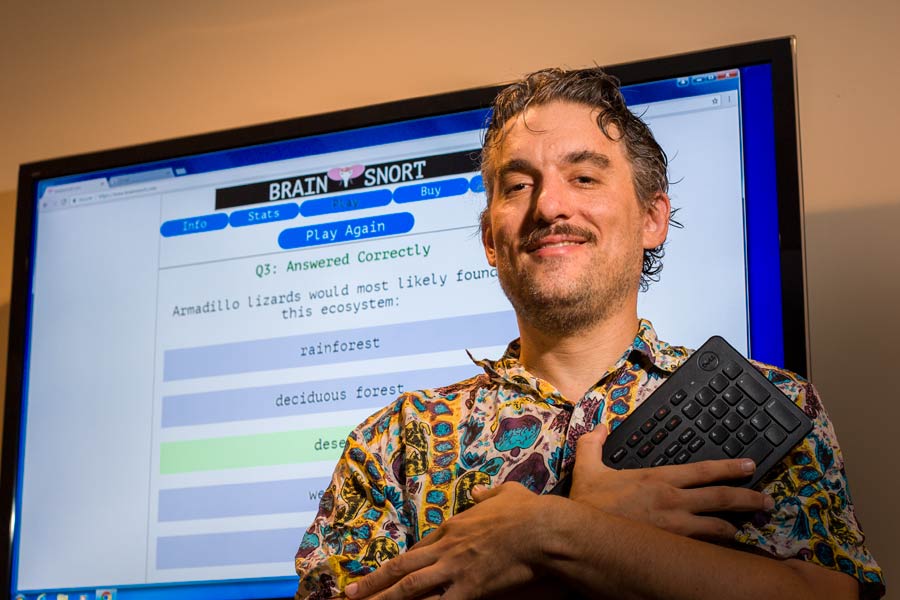 Knox College faculty member Peter Schwartzman, associate professor of environmental studies, has collaborated with a student to create what they describe as "the most challenging trivia game in existence!" The online game is Brain Snort, and its icon is a cartoon elephant with a visible brain.

The web app, available since spring, is free, though there are special features that can be purchased, and donations are always appreciated. What makes this trivia game different, Schwartzman said, is the way questions get progressively more difficult as a player advances and the inclusion of unique categories not found in other games.

"I wanted a game that was holistic, that had all the different categories," said Schwartzman. The game has categories such as "Environment," "Vocab: SAT/ACT/GRE" and "You Should Know"—a category meant to remind players, well, about some facts that they should know. The game also has traditional categories like movies, music, and sports.

"The purpose of Brain Snort is to learn—confirming knowledge you have and obtaining new knowledge," said Schwartzman. The game allows participants to go through three tiers (novice, whiz, and expert) that become more difficult as players advance. Each player begins with 200 free gold coins and can advance to the next tier by either showing proficiency in a lower tier or obtaining more coins. Players can also use coins to get more time to answer questions if the allotted 15 seconds is not enough.

Schwartzman incorporated two of his previously published specialized trivia games, WordQuiz.me and GeoQuiz.me, into the finalized product of Brain Snort. The "Word Fun" category in the game derived from WordQuiz.me, which was originally developed as a study tool for the Scrabble community. (Schwartzman often plays Scrabble and has participated four times in the National Scrabble Championships.) GeoQuiz.me was created to aid Schwartzman's daughters in studying geography.

The game is available for all ages and includes a category titled "Kid Stuff," which Schwartzman developed in hopes of exposing kids to education in a fun way. Junior high school teachers have already reached out to Schwartzman, asking how the game could be incorporated into the classroom environment.

The game originally started as an idea while Schwartzman worked with students on a variety of independent computer research projects. Since his first year as a student at Knox, Vlad Papancea '17 has worked with Schwartzman on research. As an undergraduate, Papancea helped to structure the game and creating some of the graphics and imagery, while Schwartzman started writing challenging questions.

"Being at Knox made this work," said Schwartzman. "Encouraging faculty and student contact and collaboration is very important, and it wouldn't have gotten off the ground if Vlad and I didn't have that opportunity."