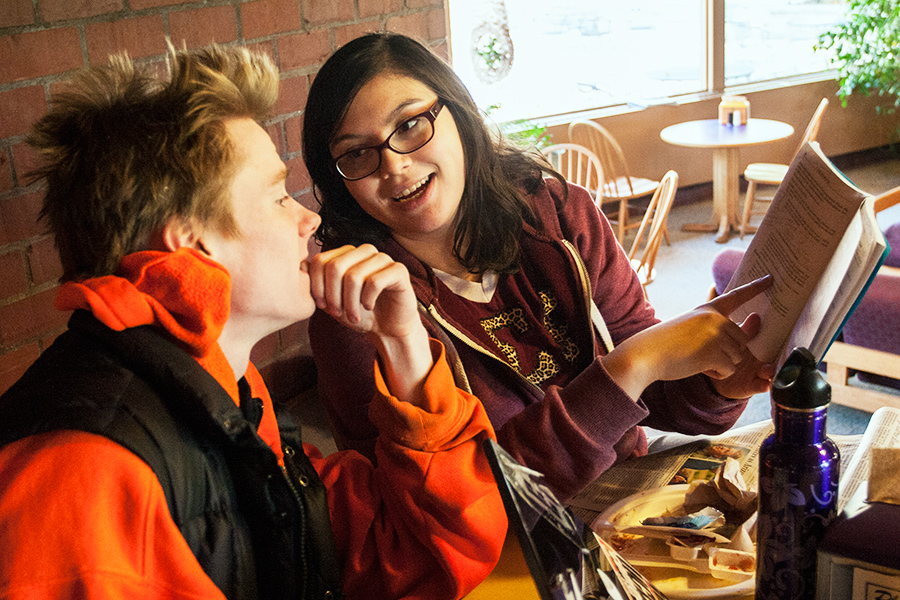 Knox College has been selected to participate in a nationwide, election-year theatrical festival, "Plays for Presidents 2012."

The festival is a series of 44 performances during 2012 of the play "44 Plays for 44 Presidents." The play consists of 44 short scenes -- one for each President of the United States.

Plays for Presidents Festival 2012 websiteAlyssa Gill and Isaac Miller, pictured above, are the student organizers of Plays for Presidents 2012 at Knox College. Gill is a Kemper scholar who has interned in Chicago theatre; Miller has acted in numerous stage productions at Knox, including Charles Mee's "Under Construction" in spring 2012.

Knox students will perform the play, free and open to the public, the day before and the day of the 2012 presidential election -- at 8:30 pm., Monday, November 5 and 6:30 p.m., Tuesday, November 6, in Studio Theatre, Ford Center for the Fine Arts.

The performances were rescheduled for an indoor location, after organizers determined the weather might not be suitable for the original plan to use a portable stage that was built last year as an independent study project by Knox student Samantha Newport.

One of just six theatres in Illinois selected to participate in the festival, Knox also will contribute a scene from its performance for inclusion in the festival's video.

The play is described by the publisher as a "chronological survey of [Presidents of the United States]... Their mistakes and successes are celebrated [as] the scenes shift frequently between the comic and the tragic."

Knox was selected by festival, which is coordinating productions in the months leading up the the election. Knox and the 43 other participating theatres will each contribute one scene from their production to a video compilation that will be released after the conclusion of the series.

Knox's contribution to the video will be a short scene about William McKinley, the 25th President, who was elected in 1897 and spoke at Knox in 1899.

The McKinley scene in "44 Plays for 44 Presidents" deals with McKinley's assassination two years after his speech at Knox. McKinley was shot September 6, 1901 by a self-proclaimed anarchist and died a week later from the wounds.

Gill and Miller, the Knox students who are coordinating the local production, explained that they chose to submit the McKinley scene for the video because of McKinley's Knox and Galesburg connection. McKinley and his cabinet came to Galesburg on October 7, 1899, to help celebrate the 41st anniversary of the Lincoln-Douglas Debate at Knox's Old Main.

The play was written and first produced in 2002 by Andy Bayiates and four other actors in Neo-Futurists, a Chicago theatrical company. The script has been updated following each subsequent presidential election.

Bayiates, who is helping organize the festival, announced Knox's selection on May 14 on the Plays for Presidents website: "We're very excited to welcome Knox into the fold... Knox has a lovely theatre program with a mission I appreciate. They promote 'observation and analysis of all dimensions of human experience, and public performances that engage audiences on multiple levels'."