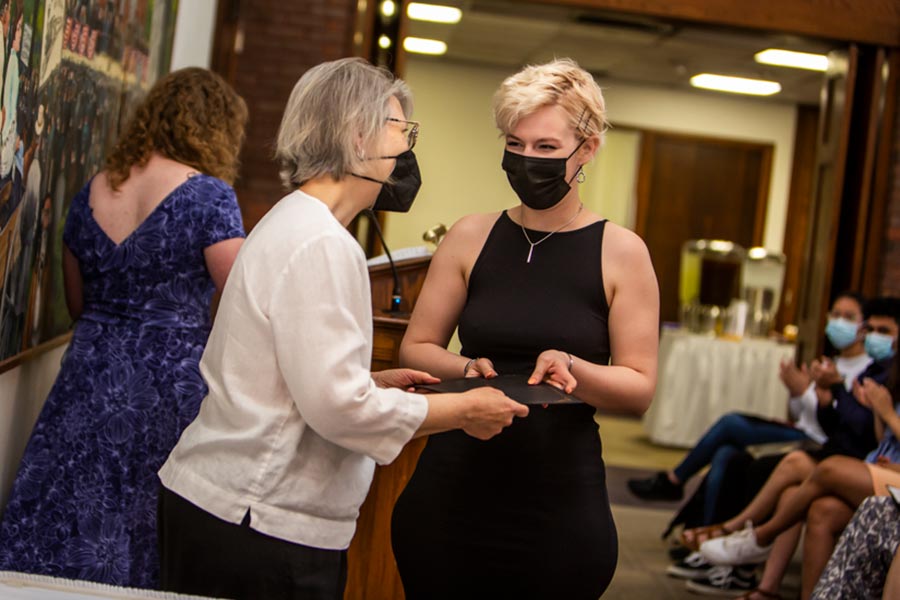 “I was so surprised to be chosen, and I am appreciative to be a part of a society that is respected nationwide,” said Addison Anderson, a junior majoring in elementary education with minors in theatre and French.

“It feels awesome to be here. I am so happy we were able to have a ceremony,” said Aditi Parikh, a senior inducted this year with majors in creative writing and psychology.

“This is such an honor and privilege. I truly was not expecting this, and after I received the news from Professor Katie Stewart, I called my mom right away,” said Daniel Cong Bien, a senior with a double major in political science and environmental studies. Following graduation, Bien, who plans to pursue a career in law, will be an aide to U.S. Senator Richard Durbin.

Also, this year, the Knox College Chapter used its ability to induct alumni members for the first time in recent memory by inviting Mary A. Crawford ’89, associate dean of the College and Philip Sidney Post Professor of Chemistry, to join its ranks. Crawford was recognized for her teaching, research, accomplishments, and leadership. Crawford joined the Knox faculty in 1997.

Phi Beta Kappa is the nation's most prestigious academic honor society. Knox's chapter is the fourth oldest in Illinois and the first at an exclusively undergraduate, four-year liberal arts college in the state. A number of notable figures can be counted among the ranks of PBK members, including 17 U.S. Presidents, 39 U.S. Supreme Court Justices, and 136 Nobel laureates. Notable Knox alumni members include the co-creator of the foundational language of computing, a Pulitzer Prize-winning journalist, and the director of the International Women's Human Rights Clinic.

(*Elected as a junior)

(*Elected as a junior)