Knox Experiences Reflect Twins Interest in the Environment and Education 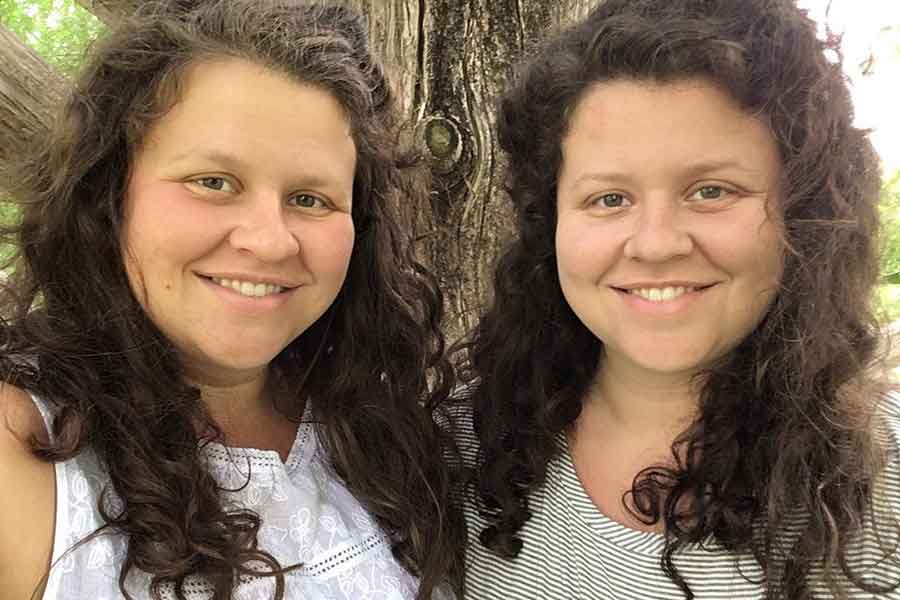 Abbie and Jessie Frank are “mirror image” twins—their identical features are on opposite sides, as if they are looking into a mirror. Both attended Knox, graduating in 2010, and, although their majors differed—Abbie majored in studio art and Jessie in environmental studies—their careers reflect their interests in the environment and education. Abbie is the executive director of the Bluestem Hall Nature School, a nonprofit located near Urbana, Illinois, and Jessie is a community-based social worker at Forest Park in St. Louis.

“We both are working with kids outdoors for nature-based education. We laugh that we’re working in very similar ways now that we’re in our 30s,” Abbie said.

They chose to attend Knox because it felt like a good fit and had programs that interested them. “I think we wanted to go together,” Jessie said. “We were not quite ready to separate.” They ended up as suitemates their first year and had the same friend group. However, students were often confused as to who was who.

“After we were at Knox for a while, everyone knew we were twins,” Jessie said. “But in the beginning, someone would walk up to me and say ‘About that French homework ...’ I would say ‘French homework?’ Then I would explain that I had a twin. We had one friend who thought we were the same person but just changed our clothes to confuse people.”

Both attended graduate school: Jessie received her master’s in social work from Washington University in St. Louis, and Abbie received a master’s in interior design at the Pratt Institute in New York. Abbie’s career path found her moving back to the Midwest to become the fifth-generation owner of her family farmhouse. She and her husband renovated her grandfather’s machine shed into a state-of-the art building, which they operated as a wedding venue for a few years, until COVID hit.

“We realized this was our window of opportunity to realign with our environmental goals,” Abbie explained. “I have a three-year-old daughter, and the school I really wanted for her did not exist. I used my skills as a designer to look at the world of education and design a program that I wanted to exist.”

Jessie combines her environmental science and social work degrees to manage the education programs for Forest Park Forever, a nonprofit conservancy that partners with the city of St. Louis to manage the park.

Her work entails developing community partners and managing youth-based programs. “I work on a strategic level trying to figure out who to work with. Why are we working with these people and what is our identity as a department?”

How Knox Has Influenced Their Careers

Jessie participated in the Green Oaks term and recalls a number of classes at Knox that impacted not only how she thought about herself, but what topics were important to her in her field.

“I didn’t see myself as a science person until I got to Knox,” Jessie said. “That’s in large part because of Jim Mountjoy, associate professor of biology, and Stuart Allison, Watson Bartlett Professor of Biology and Conservation; director of the Green Oaks Biological Field Station—they made science accessible and fun. They put it right in your hand. They had so much passion, humor, and humility. I adore both of them so much.”

Classes in environmental racism and conservation biology still figure in her day-to-day work. “Environmental Racism was a really important class for me. I went into social work, so thinking about how to be of service to others is important to me in my field. That class got me to think about the community as a whole and how that trickles down to the single individual.”

Abbie’s major in studio art allowed her to create sculpture from found objects in nature, such as large tree trunks and branches. She studied abroad in Florence, where she couldn’t easily access the natural world, so she explored that topic in her senior thesis, which investigated being connected to nature and the guilt associated with using nature to create.

One class that impacted her was Alternative to Consumerism with Tim Kasser. “It was amazing because it discussed how I had always felt and didn’t know how to verbalize.” She also liked Visual Culture Theory with Greg Gilbert, professor of art and director of the art history program “It was an awakening to the way we view society. We would take a trashy magazine and be able to see straight through the ads—how are they trying to manipulate you, what’s the psychology about the way that our society functions normally. It taught me to understand the visual culture of our society and how great an impact that has. That helped me be much more critical of the information I digest.”

Abbie also believes that one project at Knox really influenced how she views the world.

“I convinced the art department to let me study Alumni Hall before the renovation. It was fascinating,” Abbie said. “That was hugely impactful for me because I love old buildings. That’s why I went on to study architecture and interior design at Pratt. Falling in love with Alumni Hall in its dilapidated, historic untouched state, all I could see was its potential. It was so amazing.” For Abbie, that helped deepen her interest in historic buildings leading to the renovation of buildings on the family farm.

Jessie also feels that although she wasn’t sure what her future would hold as she graduated, her studies at Knox have helped her on her career path. “I thought I would work in ecology or biology, but I wanted to work directly with people. I am extremely grateful that I can combine environmental studies and social work in my job. I never thought I would be able to do that.  I am so grateful that I have my background in environmental studies, which I use all the time.”