"When we do all reconvene on campus it will be joyous" 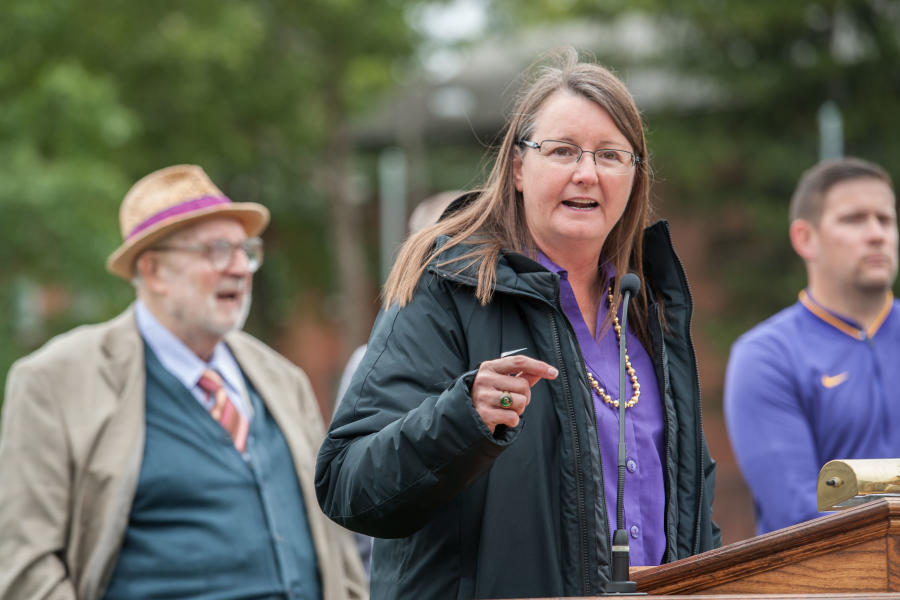 By Matthew Wheaton
The (Galesburg) Register-Mail
Reprinted with permission

The recent coronavirus (COVID-19) pandemic has put a halt to the schedules of teams from pro leagues down to junior highs across the nation, and Knox College is among them.

The school announced Friday [March 13, 2020] the cancellation of all spring sports (baseball, softball, men’s and women’s golf, men’s tennis, outdoor track and field) for the remainder of the 2020 season.

“One of the hardest decisions we have had to make concerns the spring athletics season,” said Teresa Amott, Knox’s president, on March 12. “We understand how much each season means to every student-athlete, to your families and to our fans, and are very saddened to make the decision to suspend spring play until further notice. However, it is clear that many sacrifices will need to be made if we are to control transmission of the virus, especially to vulnerable populations like the elderly and those with compromised immune systems.”

The college extended its spring break through Tuesday, March 31, and will begin online classes on Wednesday, April 1. The plan is to resume on-campus classes beginning Monday, May 4.

Needless to say, the last [several] days have been a blur for Daniella Irle, Knox’s director of athletics, but the institution was prepared.

“Once it hit Chicago, we knew it was more imminent. I think we’ve been preparing for this for two to three weeks, maybe four, I can’t put a number on it, but we’ve been paying attention to it really for as long as it’s been occurring.”

Irle, who was hired Jan. 9, 2018, has dealt with challenges in the past as a college administrator. Before arriving at Knox, she was the deputy director of athletics and senior woman administrator at the University of North Dakota in Grand Forks, and before that she worked at Tulane University in New Orleans, where she served as assistant athletics director of business and student services operations. Irle was heavily involved in providing support in rebuilding the athletic department in the aftermath of Hurricane Katrina.

“I was at Tulane when Katrina happened, so I have been through the lead up to the event and how are we preparing,” Irle said. “A hurricane is a little different, because you know it’s coming and where it’s going. It’s the preparation of the infrastructure, so I kind of put some of that knowledge to good use.

“With Katrina, we were all displaced. All our students attended classes for a full fall semester at another school. It’s not foreign to me by any stretch. I’ve been in a department where athletes are spread all across the country.

“I’m trying to draw on that experience and also, to a much lesser degree, we had the H1N1 scare in higher ed,” Irle added. “That was eight or 10 years ago, I was at the University of North Dakota, and while it never evolved into what we’re dealing with now, I think early on we certainly thought it could. All the preparations and all the things we’re talking about as a department and as a college are all the things I was experiencing and being a part of at UND. Now, it never manifested like this. H1N1 never became what the coronavirus has become, but those early stages, that first month and the weeks leading to it, we didn’t know that. I’ve drawn a little on that experience while it stopped well short of where we’re at now.”

Irle’s heart bleeds for the student-athletes, especially the seniors, who had their seasons cut short.

“I’m absolutely crushed for the seniors, because they don’t get that culminating experience. Being a four-year collegiate athlete is no small thing. It’s tough, but it’s also incredibly rewarding and incredibly empowering,” Irle said. “You finish that fourth year and you look back and you’ve done something, and you know it. You’ve got this brotherhood and sisterhood of people who have gone through it with you. The relationships that you’ve built. The senior season culminates all of those emotions and actions, so they don’t have that.

“For our spring sports in general, many of theses student-athletes have put in a robust preseason. They put in the work in the fall and the winter in the weight room and in all they do to prepare for this and to have that eliminated is incredibly disappointing,” Irle added. “To me, it’s like grieving. It starts out with sadness, and you’re probably going to go through a little mad and then you’re going to get to the resolution.

“I’ve talked to some of the seniors, but they’re all impacted. Every senior on this campus is losing that last academic and social experience.”

And when the Fire return to campus, it’ll be emotional.

“The coming home part, right? What happens when you do all get back in the same locale?,” Irle said. “People keep saying, ‘well, it will be business as usual,’ and I can assure you it won’t. The emotions are different. The experiences are different. We’re different, so when we do all reconvene on campus it will be joyous. It will be happy, but we will all have been changed.”

In the weeks ahead, Irle knows her game plan.

“I’ve talked to a number of my director of athletic colleagues and none of us are unique. We’re all in this together. There’s been a real sharing of information.”

But there may not always be answers.

“I’m prepared for understanding we may not be totally prepared,” Irle said. “I understand that there are things that we will not have answers for and our job is to find the answers.

“I understand that we need plan A, B and C, because I might need all three or a hybrid of one of the three.

“I keep telling our coaches and staff, calm and steady.

“We need to be calm and steady.”