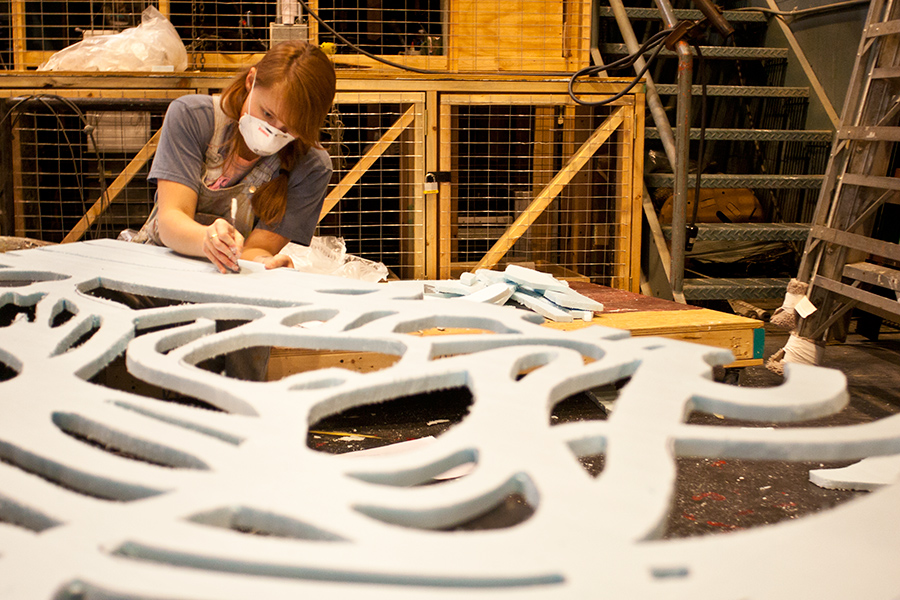 Tickets are $10 for adults, $5 for senior citizens and Knox alumni, and free to all students with a current school ID. Tickets are available at the door or in advance by calling 309-341-7472.

More about the plays:

Directed by professor Elizabeth Carlin Metz, The Green Bird is in the Italian tradition of "commedia dell'arte," a genre of sketch-based comedy that originated in Italy in the 1500s. First performed in 1765, The Green Bird is a fairy tale about two siblings who set out on a journey to learn the truth about themselves, after they discover that the people who cared for them as children were not their biological parents.

"Carlo Gozzi crafted a 'fiaba' -- a fairy tale -- of twin babies spirited away from the clutches of the murderous queen to be raised by a kindly sausage seller and his wife," said Carlin-Metz. "Animals and statues come to life, while singing fruit and a musical fountain turn philosophy on its head and take an amused, and sometimes scathing, look at humanity."

"Beneath the improvised zaniness, magical transformation, and delightful illusion, Gozzi exposes the tension between order and disorder, where the rules of the game may just be utterly unreliable."

The Caucasian Chalk Circle, directed by assistant professor Jeff Grace, was written in 1944 by a German playwright, Bertolt Brecht, who was living in the United States at the time. Using the structure of a play-within-a-play, Brecht tells two stories -- a poor working woman who rescues an abandoned child, and an argument over land between two groups of neighbors in the Caucasus region -- what was then Soviet Georgia -- near the end of World War II.

"While Brecht was influenced by his own perceptions of the world at the war, he draws upon two sources -- the biblical tale of King Solomon and the ancient Chinese play The Chalk Circle -- that both deal with adults fighting for possession of a child," Grace said. "The Caucasian Chalk Circle is an obvious metaphor for 'let the land go to those who care for it,' and it asks us to question the way we care for our land, our world, and those around us."

Knox's Repertory Theatre Term -- known by all involved as "Rep Term" -- is a "total immersion" program, in which students spend an entire ten-week term in a singe course that encompasses theatre production, history and performance. Offered every three years, it is the only undergraduate theatre program in the United States that combines academic study with all of the highly collaborative professional tasks involved in running a theatre company.

Rep Term was co-founded in 1970 by Ivan Davidson, professor emeritus of theatre; Robert Whitlatch, Robert M. and Katherine Seeley Distinguished Professor Emeritus of Theatre; along with Peter B. Young, who taught at Knox from 1967 to 1973 and recently retired from the theatre faculty at the University of West Florida.

In addition to producing the two plays, Repertory Theatre Term students enroll in a theatre seminar taught by professor Neil Blackadder. The seminar focuses on the history of the plays and playwrights. The students also take conservatory classes in movement with associate professor of dance Jennifer Smith, and voice classes with Carlin-Metz.

Students in the course this year are charting their progress in a blog, http://reptermxvi.blogspot.com/ Postings include video from a rehearsal and a trip to Chicago to purchase fabrics and costumes for the shows.